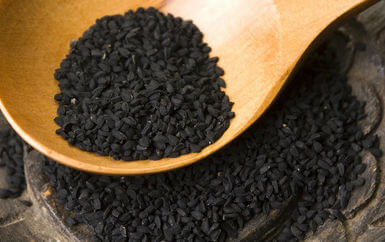 For thousands of years, the traditional black seed has been used by people living in the Middle East and parts of Asia and Africa to promote health and well being.

Known by the name “Blessed Seed,” this herb has been an important element of many Ancient civilizations and was even found in the tomb of King Tut. The earliest written record of black seed is found in the Old Testament.

The Nigella sativa, from which the seed is derived, is a flowering annual plant that is sometimes called black sesame, black caraway, onion seed and Roman coriander. The plant is bushy and self branching, and can grow up to 2-feet in height. The flowers are beautiful, and the foliage is similar to dill or fennel.

The Nigella sativa is not a newly studied plant, and since 1964, there have been more than 450 studies referencing its power.

The nutritional profile of this unassuming little seed is quite spectacular. Researchers note that it contains over 100 properties, some of which have not yet been fully researched. It is loaded with unsaturated fatty acids and contains about 35% oil, 21% protein, and 38% carbohydrates.

Half of the oil content in the black seed is essential fatty acid, including linoleic and gamma linolenic acids, that help make this seed so powerful. Black seed also contains volatile oils, which have received much attention for their anti-histamine, anti-oxidant, anti-infective and broncho-dilating properties.

Throughout history, black seed has been used to treat toothaches, headaches, intestinal worms, nasal congestion and conjunctivitis. There are no shortages of conditions for which black seed is used today including colic, constipation, hemorrhoids, asthma, bronchitis, allergies and the flu.

Research supports its use to lower blood pressure, lower cholesterol, treat cancer, treat type 2 diabetes, treat epilepsy and boost the immune system. Women have also used this powerful seed for birth control, to increase milk production and to start menstruation. Some people apply the seed directly to the skin to ease skin and joint pain, as well as to reduce the pain of headaches.

Recent research indicates that when black seed is used in combination with cysteine, vitamin E, and saffron, it may ease the side effects of a chemotherapy drug known as cisplatin.

As with any herbal treatment, we encourage you to speak to a medical professional before use. Black seed can be found on many online health sites and also at some whole food stores.