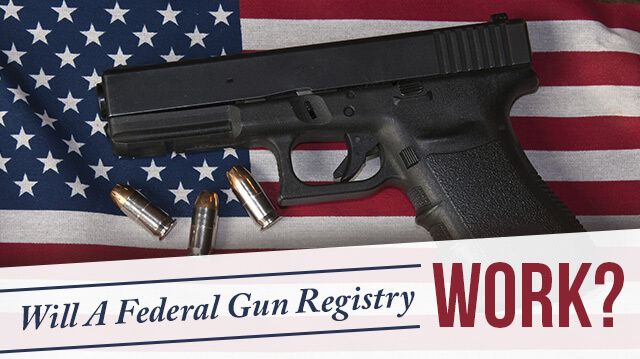 Hawaii could be about to make history, but not everyone is happy. The state is now on the cusp of creating new regulations that would put all of Hawaii’s gun owners in a federal database.

The idea involves dramatically expanding state authorities’ access to the FBI’s “Rap Back” service, which is already used nationwide to track people working in a variety of sensitive positions. People on existing Rap Back lists range from teachers to candidates for high-level government security clearances.

If someone on a list commits a crime disqualifying them from their particular qualification, relevant authorities are informed automatically. The system is generally well-received by law enforcement officials.

“State agencies have been authorized to use the Rap Back system for more than 40 purposes since 2012, including checks of teachers, daycare operators, Hawaii Health System Corporation employees, and traffic management employees with access to secured areas,” read a memo from Hawaii’s legislators.

The legislators continued, “county police departments should have similar access to information about criminal activity committed by individuals who possess and own firearms.”

Under the proposed regulation, police would immediately be informed the moment a Hawaiian gun owner faces arrest anywhere in the country.

The proposal passed the state legislature in May and awaits the signature of Hawaii Gov. David Ige. Supporters have argue that if approved, the proposal could make Hawaii a model for other states hoping to bolster gun regulation.

Not everyone thinks think the proposal is such a good idea. In a statement, the National Rifle Association’s lobby arm, the Institute for Legislative Action, has condemned the proposal as an invasion of privacy.

“The exercise of an individual’s Second Amendment rights is not inherently suspicious and should not require a person to surrender other civil liberties, including unwarranted invasions of privacy or unequal treatment under the law,” the institute warned.

“The lawful acquisition, possession, carrying, or use of a firearm does not justify subjecting citizens to ongoing monitoring,” the statement read.

Hawaii already has some of the country’s strongest gun regulations, including mandatory two-week waiting periods for purchase permits, along with background and mental health checks. Regulation advocates argue Hawaii’s tough line on guns saves lives. Hawaii already has the nation’s lowest rate of firearm related deaths, according to research from the Violence Policy Center (VPC).

In an analysis of data from the Centers for Disease Control and Prevention data, the VPC found Hawaii’s gun death rate per 100,000 people was less than three (2.82). Comparably, the state with the highest rate of gun related deaths was Alaska, where just under 20 people out of 100,000 are killed by guns.

According to the VPC, there is a clear correlation between regulation and reduced deaths. “States with the lowest overall gun death rates have lower rates of gun ownership and some of the strongest gun violence prevention laws in the nation,” the VPC stated.

“However, even in these states the human toll of gun violence is far above the gun death rate in other industrialized nations,” they noted.

Even in Hawaii, police say current regulation isn’t enough. Honolulu Police Department Maj. Richard Robinson has warned police usually only discover people who are disqualified from owning guns when they try to purchase a new firearm. Under Hawaiian law, background checks are only conducted at the time of a gun purchase.

“We were only discovering things by accident,” Robinson told the Associated Press. “They happen to come register another firearm, we run another background check, and then we find out they’re a prohibited person.”

Robinson helped draft the bill proposing the addition of Hawaii’s gun owners to the Rap Back database.

The proposal is likely to face fierce legal scrutiny before being implemented. However, in recent years the Supreme Court has given states broad discretion when it comes to regulating firearms, meaning there’s a good chance the Hawaiian proposal could survive legal challenges.

It’s less clear that the database idea will enjoy nationwide approval. Polls suggest the U.S. public is split down the middle when it comes to gun regulation. A 2014 Gallup poll found 55 percent of voters said they were dissatisfied with existing gun laws, while 40 percent of respondents expressed satisfaction with the status quo.

A year earlier, an internal NRA poll found more than 90 percent of rank-and-file members of the pro-gun group opposed any legislation requiring gun owners to register with a federal database.

In many ways, Hawaii’s experiment with Rap Back could be the canary in the coalmine for coming gun regulation. If the proposed legislation survives a gauntlet of legal challenges, other states will likely be watching closely to see if it bears dividends in public safety and improved policing. However, in an age of growing concern over government erosion of privacy, the proposed legislation could face a severe public backlash.

What do you think? Is a federal database for gun owners a reasonable public safety policy or a heavy-handed invasion of privacy? Tell us in the comments below.