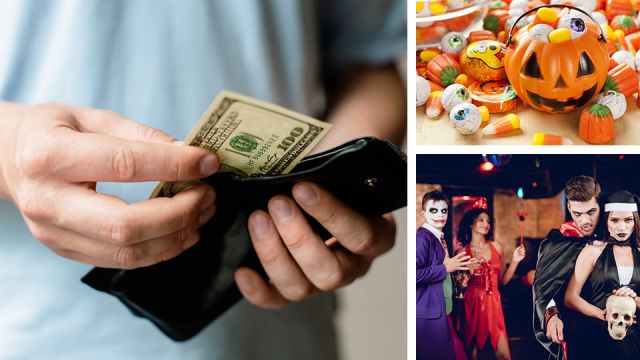 This year, spending on Halloween is expected to reach an average of $86.13 per person, up from $82.93 last year, according to the National Retail Federation’s annual survey on Halloween.

Halloween was originally a festival that marked the end of harvest, and was a time of sharing with the dead as they crossed over into the other world. It has been a way to recognize and play with death, but over the last 50 to 60 years, U.S.-based candy companies promoted the idea that trick-or-treating shouldn’t be rewarded with coins, nuts, fruit or toys, but with chocolates and other candy.

The National Retail Federation survey talked to 7,013 consumers in September about their plans for this year. It forecasts a total spend of $9.1 billion, with that spending including:

In addition, the top 10 advertisers spent $29.2 million in 2014 on advertising for Halloween, with Walmart topping the list, spending nearly $5 million.

Beyond the spending, 48 percent of adults plan to dress up, with witches, Batman and animal costumes among the most popular choices. Superheroes were at the top of the list for children, and hot dogs and pumpkins for pets. Some 71 percent plan to hand out candy, 49 percent will decorate their home or yard, 46 percent will carve a pumpkin and 16 percent will dress pets in costumes.

Some of the most profitable categories, according to retailers, are home decor and accessories. This could be because people spend time and money on outdoing their neighbors, one participant in the 2016 survey of businesses said.

Further, the haunted house industry, according to a Statista analysis, has been “embraced by Corporate America” with millions being spent on sponsorship deals with soft drink, fast food and cell phone brands.

Other ways Halloween money could be spent

Here at The Alternative Daily, we crunched the numbers to work out how this Halloween money could have been spent:

So, added all up, the money being spent on Halloween paraphernalia could instead put some people through college, feed the homeless, make contraception more affordable and reforest the country.

Does your Halloween costume contain toxins?

Beyond the way money is spent, there are also issues with the way Halloween goods are produced. The Alternative Daily talked to Todd Larsen, a director with Green America, who stressed that the costumes and decorations are often made from plastics derived from petroleum “and can contain many toxins.”

“Since these costumes and decorations are often thrown away after one use, they end up in landfills, where they break down slowly, leaching toxins. Plastics also end up in waterways and harm a wide variety of wildlife,” he said.

Consumerism has consequences on your happiness

Casey Williams, a director of New Dream, an organization focused on transforming consumption habits for the wellbeing of people and planet, also talked to AD, and warned that these high spending levels and the general “accumulation of stuff” is having significant consequences for not just the environment, but also on “our own health and happiness.

“Advertising campaigns are telling us that more stuff will make us happier, smarter or more loved, even though the research suggests otherwise,” Williams said. In fact, “evidence suggests that once basic needs are met, further consumption doesn’t do much to increase happiness. It may even decrease it.”

Indeed, studies have found a direct correlation between materialism and being susceptible to mental health disorders. People who consume more also see a decrease in well-being, which includes things like sense of purpose, autonomy and good interpersonal relationships. A controlled study published in Psychological Science also found that people who repeatedly see advertising that portrays them as consumers rather than citizens experience immediate increases in anxiety and depression and become more selfish.

“Consumption is the “norm” in American society… we have transitioned from a society that values savings and thrift to one that increasingly relies on debt and credit,” Williams said. She cited retail analyst Victor Lebow, who in an influential paper published as early as 1955, stated, “Our enormously productive economy demands that we make consumption our way of life, that we convert the buying and use of goods into rituals, that we seek our spiritual satisfactions, our ego satisfactions, in consumption… We need things consumed, burned up, worn out, replaced and discarded at an ever-increasing pace.”

Halloween goods are manufactured in sweatshops

The manufacturing process of many Halloween goods also comes with its own price, as “costumes and décor are generally manufactured overseas in sweatshops with long hours and with workers frequently exposed to toxins. Chocolate mostly comes from cocoa farms in West Africa, where farmers are paid far less than a living wage, and many children toil on farms instead of attending school,” Larsen pointed out.

Other ways to celebrate Halloween

As Larsen noted, people are becoming increasingly pressed for time, and often aren’t able to make their own costumes or decorations. However, he suggests that where possible, it’s important that people take up the challenge to make costumes and decorations from materials around the house. It’s “an opportunity to use our creativity… and time spent with family or friends.”

“You can also work with your neighbors to create a costume swap. Everyone brings old costumes and puts them out on tables organized by age group or size. Then, people pick a new costume and go home with it for Halloween,” he suggested.

Larsen believes it’s important to aim for fair trade chocolate, which pays farmers a dignified wage, and his organization recommends this list of other green treats.

Williams and New Dream stress the importance of reusing decorations, and making them out of materials like corn husks, gourds and straw bales.

For Halloween and the upcoming holiday seasons, New Dreams is also promoting a resource called the GiveLIst, which is the opposite of a traditional registry. Here, adults and children can register their home-made creations, and make them available for others to choose from.

Finally, Global Exchange in the past has promoted the idea of reverse trick-or-treating, where children give out fair trade chocolate along with information sheets, instead of asking for candy.

How are you making Halloween meaningful?