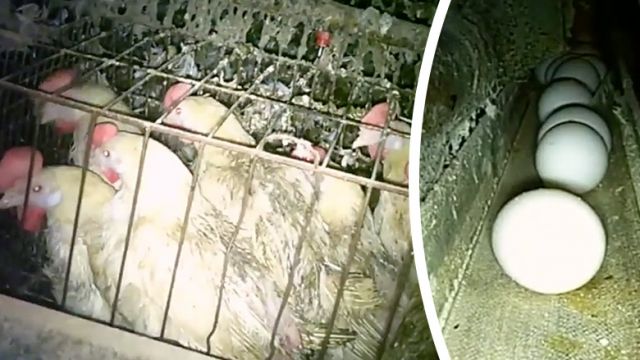 A new viral video shows egg hens being subject to violence, living in gross conditions and dying prolonged deaths. The video was released by the Animal Recovery Mission after an undercover investigation in which they claim that the company Cal-Maine extensively abuses it’s egg hens.

Cal-Maine produces and distributes shell eggs throughout the U.S., particularly to the southern and middle regions. It has a total flock of 33.9 million egg layers. Cal-Maine supplies eggs to retailers like Walmart (according to its annual report, Walmart and Sam’s Club accounted for 28.9 percent of its business in 2016) and claims to be the “largest producer and marketer of shell eggs” in the U.S.

The following video contains graphic footage that some people may find disturbing to watch:

Hens were ‘stuffed, punched and even kicked’

In the video, viewers can see hens being jammed into cages, being housed without lighting and sporting extremely overgrown nails. There is footage of hens’ feet falling through the cage floor or their heads getting caught in the cage roof — in both cases resulting in severed body parts and prolonged deaths. Other footage shows birds being put into garbage bags and suffocated, and birds covered in feces from the birds in cages above. There are hundreds of cockroaches crawling over the birds’ cages.

While it isn’t clear from the footage alone where and where it was filmed, the Animal Recovery Mission also wrote a 52-page report on their undercover findings. Most of the report consists of photos and information on regulations.

The organization states that it had one of its investigators hired by Cal-Maine in October and November last year. It goes into specific detail about what the investigator observed at the Lake Wales facility. He or she saw how the battery cages are “stacked four tiers high,” and how there are often nine hens per cage. Such overcrowdedness led to “several hens being trampled to death by one another… and to hens becoming wedged within the wire cage and strangling themselves to death.”

Every day, 20 to 86 dead chickens were collected during the investigation, according to ARM. At one point, when new hens were brought in, they were “stuffed, punched and even kicked” into the cages, while hens that escaped and fell into the manure pits were eventually rounded up and killed. ARM states that employees and management struck the hens to death with a stick. “At one point the stick broke and employees were seen stabbing the hens with the broken end of the stick.”

The company released a public statement on Tuesday in response to the video, recognizing that the footage was from their location in Lake Wales, Florida, but claiming it represented an “isolated incident.”

In the statement, Cal-Maine says it is an “industry leader in accepting and implementing animal welfare measures” and claims its employees are all required to review the company code of conduct on the ethical treatment of hens.

Cal-Maine said that the person who filmed the videos (an employee at the time) disregarded “farm procedures as part of his intent to misrepresent our efforts to provide proper care for our hens. The employee’s job included identifying and addressing the type of issues shown on the video, and he failed to meet his job requirements.”

Cal-Maine states that the employee filmed mistreating a hen was fired. The company also alleges that it allowed the local sheriff and officials from the Florida Department of Agriculture and Consumer Services to inspect its facilities and that those officials reported that the conditions there were different from those depicted in the video.

In a lawsuit that is unrelated to the aforementioned investigation, the U.S. alleges that Walmart misled shoppers by claiming that some of its organic eggs were laid by birds with outdoor access, when in fact the hens lived in enclosed structures.

The USDA hasn’t yet specified what it means though for birds to have access to the outdoors, and the eggs Walmart sells under its Organic Marketside brand are raised by Cal-Maine inside enclosed structures with screens to let in the air, according to the lawsuit.

At the moment, enclosed structures (or porches) meet the USDA’s standards for access to the outdoors. But shoppers often expect egg-laying hens will actually be able to walk around on the ground and have access to sunshine, David Bruce, general manager of eggs for Organic Valley, the largest U.S. cooperative of organic farmers, told Reuters.

Do you eat eggs? Do you trust the labeling when you buy them?