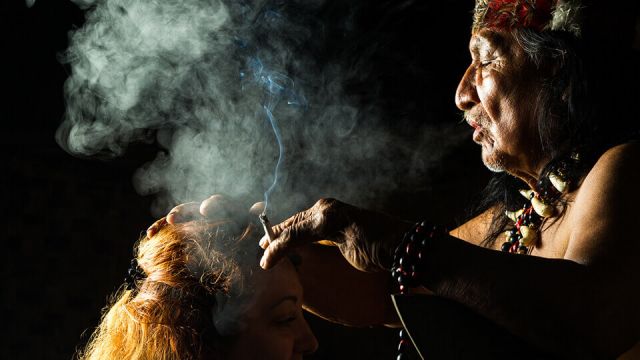 Some swear that taking ayahuasca is like having ten years of therapy in one night. But this mind-altering substance should not be taken lightly, and only under the supervision of an experienced shaman. If you’ve ever thought of participating in a spiritual retreat that includes ayahuasca, then here’s what you need to know.

Ayahuasca (pronounced eye-uh-WAH-skuh) is capable of inducing altered states of consciousness that usually last between four to eight hours after ingestion. Hugely popular, this thick brownish liquid with a muddy herbal taste, is generally found in the Amazonian regions of Brazil and Peru. Here, ayahuasca is considered a traditional and legal medicine, which is why tourists from around the world flock to partake in ceremonies.

Most are conducted at jungle retreats by legitimate shamans who screen for physical and mental stability, and are highly-experience in handling severe psychological responses to the psychedelic substance. Hallucinations can be mild or extremely visionary, and some believe these visions are life-altering.

Ayahuasca is fascinating for many reasons. It’s brewed from two plants. One contains dimethyltryptamine (DMT), the only psychedelic known to occur naturally in the human body. In 1972, Nobel laureate, Julius Axelrod discovered DMT in human brain tissue. This lead to speculation — never confirmed — that it plays a role in psychosis and other extreme mental conditions.

For years, researchers have been studying psychedelics to help end addictions to everything from alcohol and cigarettes to methamphetamine. Ayahuasca is under study for similar uses. Research published in the journal Frontiers of Pharmacology provides an overview of the scientific research supporting ayahuasca potential therapeutic benefits.

Researchers found that in the right therapeutic or ritual setting and with proper preparation and mindset, ayahuasca has proven effective in the treatment of substance dependence like alcoholism. That’s exciting, but researchers also point out that: “we are not going to see major pharmaceutical companies address the need for evaluation of ayahuasca.” Because there are currently no financial incentives. There are multiple levels of society at which we need to act to change the current political climate that regulates these substances,” say researchers.

Meanwhile, in an OWN channel series, Lindsay Lohan speaks about her participation in an ayahuasca cleanse and how it helped with her addiction issues and keeping her sober.

“I saw my whole life in front of me,” she tells the camera. “And I had to let go of past things.” Lohan said she saw herself die and then being reborn.

Combat-related post-traumatic stress disorder (PTSD) is notoriously difficult to treat. But, ayahuasca may help treat PTSD as a form of drug-assisted exposure therapy, reports The Guardian. The psychedelic tea is often used to dredge up traumatic memories and expose them to conscious awareness. When done within a safe and controlled environment, ayahuasca allows the brain to reassess and extinguish conditioned fear responses like those associated with PTSD.

…But it’s not a casual or recreational drug

Ayahuasca is quite safe medically, suggests Dr. Andrew Weil, but it’s a powerful psychoactive drug. Therefore, it should only be used under the supervision of someone familiar with its effects. It can be psychologically risky if taken under the wrong conditions. It should not be used casually or recreationally.

Where to find ayahuasca

A few decades ago, partaking in an ayahuasca meant trekking through the forests of South America to find shamans who performed ceremonies. But while jungle retreats in Peru or Brazil are still hugely popular, two religious organizations in the United States are also sanctioned to use it legally, reports The New York Times.

The use of ayahuasca is somewhat murky in the U.S. since its active ingredient, DMT, is outlawed as a Schedule I drug — the same category as heroin and ecstasy. But the plant itself is unregulated. Two religious groups with Brazilian roots, Centro Espírita Beneficente União do Vegetal (commonly known as U.D.V.) and Santo Daime, are legally able to use ayahuasca in ceremonies.

The darker side of ayahuasca

There is a darker side to ayahuasca. This foul-tasting hallucinogenic tea can induce violent nausea and even terrifying visions, reports Scientific American. In fact, ayahuasca can cause severe reactions when combined with foods such as cheese, beer, wine, yogurt, coffee and chocolate. It also reacts negatively with amphetamine-type compounds such as ephedrine and MDMA and with selective serotonin reuptake inhibitors, a class of antidepressants. The best way to avoid these negative physiological side effects is by fasting for 12 or more hours before consuming ayahuasca.

In addition, despite many positive experiences, there are numerous things to look out for. Anyone interested in drinking ayahuasca should research it extensively. In Iquitos, Peru, The Guardian reports an increasing number of inexperienced people calling themselves curanderos, when in fact they know nothing about it. There have also been sexual assaults reported on women under the influence. Some people have also had terrifying experiences and violent reactions, resulting in death.

Some have died trying to find enlightenment

Poorly mixed brews, or teas made with other more dangerous plants like Toe, have contributed to bad reactions. Additionally, poor screening for medical issues have proved disastrous.

For example, 24-year-old Matthew Dawson-Clarke died after drinking a powerful brew of tobacco tea in preparation for an ayahuasca ceremony, according to ABC Australia. In another incident, Mail Online reports that in 2012, a Peruvian shaman admitted to police that he had buried the body of a U.S. teenager to cover up his death during a spiritual retreat in the Amazon. Shaman Jose Pineda Vargas told authorities that 18-year-old Kyle Joseph Nolan, from northern California, died from exceeding the dosage of ayahuasca while staying at the Shimbre Shamanic Center.

People from around the world travel to the Amazon every year to drink ayahuasca tea for mental health conditions including alcoholism, depression, anxiety, PTSD, eating disorders and drug addiction. Shamans also illegally hold ceremonies in major cities across the U.S., Canada, Europe and Australia.

But centers like the Rainforest Healing Center take ayahuasca healing very seriously. So, for those simply looking to get high, “you’re not welcome at the center,” says Omar Gomez, owner. He tells The Guardian that he turns away 60 percent of potential visitors. Usually, because they have mental conditions that ayahuasca doesn’t mix well with — like schizophrenia — or because they’re just not serious about it.

If you believe ayahuasca may be something that can help your PTSD, addiction or other mental health disorders, speak with your doctor and research reputable retreats who understand and specialize in ayahuasca.