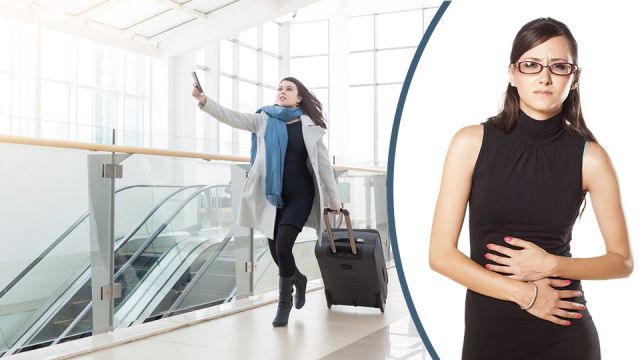 Many people have versions of that nightmare where you’re rushing to the airport but you’re going to miss the plane, or you’re packing for a trip and only have 10 minutes to think about all the things you’ll need. The other night I had this nightmare again, but it ended with the plane crashing during takeoff.

Though the latter hasn’t happened to me, those plane nightmares have actually been my reality, a number of times, despite the fact that I’m an excessively organized person. There was that time I was changing flights in Peru, and due to delays had just 20 minutes to get from one plane to the next. The airport had no signage about where to go. I ran and skated along those airport tiles, consulting with airport workers as I went. It’s lucky I speak Spanish.

There was another time I lost my passport at the Havana airport (how’s that for irony) and almost missed that plane as well, and the other time I got my dates mixed up and arrived at Mexico City’s airport a full day early, then panicked for about four seconds when they told me I wasn’t listed for the flight.

Travel mistakes can happen to us all. Travel can be both mind-expanding, relaxing and stressful — and therefore make you prone to mistakes. But if you’re aware of the mistakes ahead of time, you have a better chance of avoiding them. Here are seven to watch out for:

1. Not bringing a change of clothes

Traveling light is the bomb — you feel freer to go where you need to go and less stressed when you have to catch a series of buses, or walk a long way. But during a two-day trip to Colombia, bringing just the clothes I had on me and the basics in a small shoulder bag, I discovered you can take this idea too far. The bus trip was a windy one and a number of people got sick, including the kid next to me, who threw-up on my only skirt. I spent a good part of that short trip in a hostel room with my one skirt draped over the fan to dry, after I washed it in the sink.

2. Being disorganized and expecting things to just work out

This happened to a friend who was traveling through Venezuela. She changed enough foreign currency for the full trip at the Caracas airport with a person who seemed nice and was dressed in a uniform. She didn’t know the exchange rate though and ending up getting about 1/100 of what she should have gotten. She found out her mistake when she tried to get a taxi out of the airport, and couldn’t afford it.

A healthy dose of flexibility is important when you’re traveling. But I suggest researching well the airports you’re traveling through, planning how you’ll get transport out of the airport and the things you’ll do when you’re there, like changing money, getting a SIM card and even how you’ll move your luggage around. The world is lovely, but airports are the places where people get ripped off and scammed.

You might find yourself amazed that there aren’t any ATMs and you have no way to pay to get into the city, or riding with a taxi driver who pretends your hostel doesn’t exist and takes you to one that costs 10 times more and that’s conveniently run by a friend (the latter has happened to me). There are often airport buses into the city, and I aim to take those when possible.

So, I haven’t done this one, but I’ve seen it happen a lot. If you’re a native English speaker, don’t go to a non-English country and yell at people in English, expecting them to speak it. Don’t ask restaurants if they accept U.S. dollars — they usually don’t. Don’t expect anything to be the same. In Mexico, for example, lunch is between 3 p.m. and 5 p.m., and if you get a comida, it includes juice, soup and dessert. Most importantly, try your best to see the country with fresh eyes. Your way of doing society, democracy, religion, law and order, politeness and socializing is just one way. The beauty of traveling to other countries, and even other states, is learning about all the others.

4. Turning your trip into the to-do list from hell

Sure, there will be places you won’t want to miss out on at your destination, and a food you absolutely have to try. That’s great. But don’t turn your holiday into work, where you run from one place to another, and try to squeeze in one more thing at the end of the night, despite being exhausted. A keen bean, I’ve made this mistake, and ended up cranky, exhausted and not open enough to spontaneity.

Now, one of my favorite things when arriving in a new place is just to put my bag down somewhere and go for a walk. I like street life and the random things you see people doing, and I like just seeing where the streets take me. Typically for me, the big tourist attractions haven’t held as many stories and beauty as people just doing their thing.

Not everyone who travels is well-off, and having to show some restraint is totally understandable. My partner always wants to spend half an hour walking around a town to make sure we’ve found the cheapest room. That’s fine. But sometimes a once-in-a-lifetime experience pops up, and it costs a bit more than he thinks is reasonable, and that’s when he hesitates. Later, he tells me he regrets that. You can only spend the money you have, and often the best things are the cheapest when traveling (like incredible street food, or random conversations with other people), but you’ll enjoy your trip more if you don’t spend most of it doing calculations in your head about what is reasonable and what isn’t.

6. Relying too much on travel guides

Again, this isn’t something that I tend to do; I usually do my own research and rely on asking locals for directions. But, I have a few travel guides on my Kindle, as they can be a great starting point for ideas, and sometimes have good recommendations for food or accommodation. But not always. Here in South America, I’ve found that accommodation recommended by travel guides tends to be about double the price, and busy and noisy. I could also list the times the maps have been wrong, and the guide’s explanation of local culture has come from the naive perspective of a person passing through the area, rather than the in depth understanding of people who live there.

7. Not bringing meds along

Anti-nausea and diarrhea pills are essential. One time my partner and I were stuck on a three-hour boat trip down a river in Guatemala and my partner’s stomach wasn’t happy about it. Anti-nausea pills would have got him through it, but unfortunately, we didn’t have any.

What are some mistakes you’ve made while traveling that you’ll never make again?