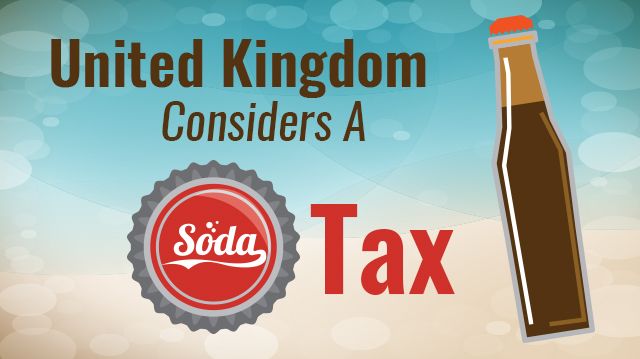 Rising obesity rates are not only a concern for the United States; they plague our friends across the pond, as well. In an attempt to combat this health crisis, British Prime Minister David Cameron’s finance minister, Chancellor of the Exchequer George Osborne, has proposed a national soda tax.

Osborne stated that the major motivator behind his proposal of this tax was the rise of childhood obesity in the UK. According to some experts, within a generation, 50 percent of boys and 70 percent of girls in the UK could be overweight or obese.

Addressing Parliament, Osborne announced, “I am not prepared to look back at my time here in this Parliament, doing this job, and say to my children’s generation, ‘I’m sorry. We knew there was a problem with sugary drinks. We knew it caused disease. But we ducked the difficult decisions and we did nothing.'”

If this proposed tax is approved and passed into a law, it will go into effect in two years. It is estimated to raise 742 million dollars during its first year in place — funds which will go toward funding primary school sports programs.

On the new proposed tax, Jamie Oliver, a well-known British chef who has spoken in favor of a soda tax for a long time, stated, “The food revolution is underway. This feels like a victory for Britain’s children and for everyone who has campaigned so hard for a tax on sugary sweetened drinks. I hope that this bravery will continue to form a part of this government’s attitude to dealing with obesity.”

Beverage companies are, as expected, frustrated with this proposal and are likely to fight against it. The Food and Drink Federation’s director general, Ian Wright, commented: “We are extremely disappointed by today’s announcement. The imposition of this tax will, sadly, result in less innovation and product reformulation, and for some manufacturers is certain to cost jobs.”

While the loss of jobs would certainly be unfortunate, the health of future generations seems more pressing. As far as product innovation and reformation, well, in the world of sodas, they really aren’t getting any healthier if they contain as much sugar and chemicals as they do. We’re all better off avoiding them completely.

In the United States, the American Beverage Association has spent millions of dollars to fight sugar tax and sugary drink labeling laws. However, in many places, these laws are being passed nonetheless. The city of Berkeley, California, passed a sugary beverage tax in 2013, and this past November, the FDA released guidelines stating that Americans should not consume more than 50 grams of sugar per day (many experts claim that this is still much too high).

Although a higher tax may not discourage all soda addicts from buying soda, it’s a start. Anything that can be done to discourage the increased consumption of this nutritionally void and dangerous beverage is a positive step.

What do you think? Do you think a soda tax would be effective in discouraging people from drinking soda?