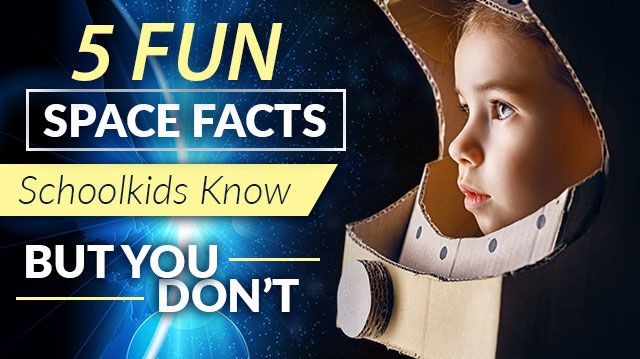 Fourth-grade astronomy is no joke, especially given that scientists are learning more about our planet, solar system and universe all the time. Though every school has a slightly different curriculum, chances are most nine-year-olds know more about the solar system than their parents. Here are five fun space facts that we should all know.

We may only have eight planets (sorry Pluto!), but our solar system includes more than 100 worlds. For a world to be classified as a planet it must orbit the sun, be round due to forces of its own gravity, and have smaller objects in its orbit. A “world” is much more loosely defined and can include moons, asteroids and other space objects, of which there are many.

2. The asteroid belt, the Kuiper belt and the Oort cloud

Planets aren’t the only defining characteristics of our solar system. The asteroid belt is a ring of space objects that vary greatly in size but are too small to be planets. It lies between Jupiter and Mars. The Kuiper belt is similar but lies beyond Pluto. The Oort cloud is even further from our sun and consists of millions of randomly directed comets traveling at super high speeds.

4. Phases of the moon

There are eight phases of the moon. How many can you name? If you’re like most adults, you know the full moon when you see it. Maybe you are able to conjure a memory of the new moon phase, and that might be all. Fourth graders learn all eight:

Many adults can still remember the mnemonic they used to memorize the planets (My Very Educated Mother Just Served Us Nine Pies… Mercury, Venus, Earth, Mars, Jupiter, Saturn, Uranus, Neptune, Pluto). Funny how an old saying can stick with us through time. Add the general knowledge that Pluto has been demoted to dwarf planet and you’ve mastered not only the names of our planets, but their order from the sun.

Fourth graders are still ahead. They learn specific planet characteristics that most adults have either forgotten or never learned in the first place. For example, do you know the difference between terrestrial and Jovian planets? Terrestrial planets are made of rock and positioned closer to the sun. Jovian planets are made of gas and orbit further from the sun. Here is one important fact about each planet. How many do you already know?

Mercury is covered with craters from past encounters with comets and asteroids. Unlike other planets, Mercury’s crust is too thick to allow for volcanic eruptions, which work to smooth out these craters.

Venus is the most like Earth, but the planet is completely uninhabitable due to forces akin to global warming. Scientists believe that the planet’s proximity to the sun led to all its surface water evaporating and trapping the sun’s energy within the atmosphere. The surface can reach temperatures of nearly 900 degrees Fahrenheit. 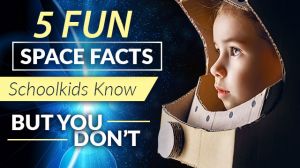 Earth is not round. It is roughly pear shaped. It has a nickel and iron core that rotates rapidly, creating its magnetic field. That field protects us from solar wind and its contact with the solar wind creates the aurora borealis — the northern lights.

Mars has the most extreme landscape of all the plants. Its largest canyon would span the distance between New York and Los Angeles. Olympus Mons, its largest volcano, is three times bigger than Mount Everest.

Jupiter has the most moons. The count rests at 63 official moons as of 2009. The planet’s largest moons are Io, Europa, Ganymede and Callisto.

Saturn’s gaseous atmosphere blends into its liquid surface. As the pressure of the planet increases, gaseous hydrogen becomes liquid hydrogen. With no discernable surface distinguishable from the atmosphere, scientists have arbitrarily determined the surface to start at one bar of pressure. Scientists are not sure whether the planet’s core hardens up or remains liquid throughout.

Uranus is the only planet that spins on its side. There are several theories for why this might be the case, including a past collision or the gravitational pull of a moon that has since been drawn away.

Neptune has the strongest winds of any planet in our solar system. They are believed to travel at approximately 1,200 miles per hour.

For more information about astronomy, visit our sources below.