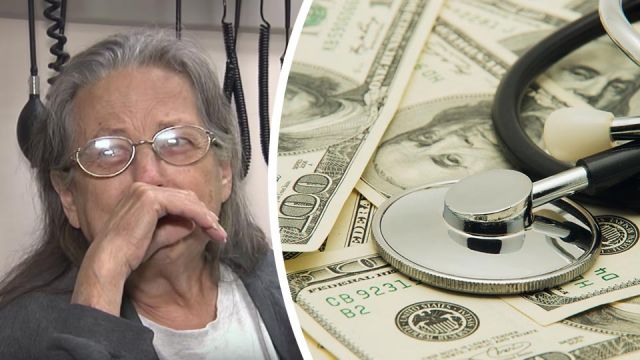 You’ve worked your entire life, paid your dues each month and skimped on the things you really wanted, because frankly, there just isn’t enough money. Paying the heating bill, water bill, car loan, or putting food on the table takes priority. Suddenly, you’re sick — with no money to spare. You just can’t afford to cover the costs associated with the required treatment. What happens now? Well, for some, the answer is simple: you wait to die.

This woman’s only option is death

Susan Moore needs ongoing dialysis to survive. Medicare and Medicaid cover the treatment but not the cost of getting her to and from her appointments. For wealthier Americans, her problem may seem trivial. But for the 40.6 million people in America who live below the poverty line, even something as simple as transportation can make the difference between life and death.

Moore needs dialysis three times per week. The cost of transportation is $10 per trip. That’s about $120 per month — an amount, Moore says, she can’t afford. So, she believes her only option is death.

One-third of Americans have limited or no insurance

About 44 million people in the U.S. have no health insurance. And another 38 million have insufficient health insurance. This means that nearly one-third of Americans may not have medical care available for them and their families if and when they need it. Moreover, not having health insurance also means not having a regular doctor and limited access to prescription drugs.

Uninsured people also forego preventive care including routine checkups or not immunizing their children. This can quickly lead an uninsured person down a slippery slope when they or a family member becomes ill. Suddenly, hospitalization is required for a health condition that could have been avoided.

Being insured doesn’t necessarily guarantee you’ll have enough money to pay doctor, hospital, pharmaceutical and other medical bills. Insurance is supposed to protect people financially from the costs associated with everything from hospitalization to prescription drugs. But out-of-pocket spending for even those with employer-provided health insurance has increased by more than 50 percent since 2010. In fact, a 2015 poll by the Robert Wood Johnson Foundation and the Harvard T.H. Chan School of Public Health found that 26 percent of those surveyed said medical bills severely damaged their financial bottom line.

According to the Kaiser Family Foundation, in 2016, half of all insurance policy-holders also faced a deductible of $1,000 (the out-of-pocket amount people must pay before their insurance kicks in). And for those people enrolled in Affordable Care Act (ACA) Marketplaces the figure is even higher. While a chronic illness can certainly cripple a household financially, so too can something as simple as a broken bone or an emergency appendectomy.

The bottom line is, nearly everyone will, at one time or another, need emergency care leading to unexpected bills. And many people, like Moore, can’t absorb those costs without difficulty. Yet, while this is a common problem, there’s not much in place to help people get through these difficult times. So, what happens when you can’t afford your medical expenses? For some, it may mean racking up credit cards, taking personal loans, selling family heirlooms, declaring bankruptcy or losing their homes. And for those who have tapped all financial resources, it could mean homelessness.

Getting sick in the U.S. can lead to homelessness

Every day, about half a million people find themselves without a stable place to live. In fact, 3.5 million people experience this at some point during their lives, reports The Atlantic. Back when I was in college, I discovered a family living in a large van in the college parking lot. Each day a young man would leave the van with briefcase in hand. He’d say goodbye to his younger siblings and parents, and head for class. At the time I naively mused to friends that the parking lot had been taken over by gypsies. But in reality, that family was homeless. It turned out the father had become ill and unemployed, and the family spent their last dollars on tuition for their son.

Families headed by women make up one-third of all homeless people. The result is this: 100,000 children are homeless each day, with half of those children being under the age of five. For someone who is ill, holding a job can be difficult. This can lead a person without a safety net to homelessness. Meanwhile, being homeless can exacerbate illness, making finding a job almost impossible. Due to the mostly employer-based health insurance coverage system in the U.S., no job means no health insurance. Therefore, getting sick in the U.S. can lead to financial ruin.

Getting sick in the U.S. sends people to other countries

So, what else happens when Americans can’t afford the price to get well in the U.S? They head to another country. Every day uninsured Americans travel to Mexico, India and Costa Rica for surgeries they simply can’t afford or can’t get approved through their insurance in the U.S. The difference could amount to tens of thousands of dollars in savings for a patient. The Centers for Disease Control (CDC) estimates that 750,000 Americans travel outside the country for medical treatments each year. That’s more than 2,000 people a day!

Known as “medical tourism,” many Americans simply can’t afford the high-cost associated with homebound surgeries like dental surgery, hip replacement, knee replacement and even heart surgery. Surprisingly, even a handful of insurance companies are encouraging Americans to travel abroad. Covering the travel and treatment costs is cheaper for insurance companies than treatment in the U.S., reports The Fiscal Times.

In the end, what it really boils down to is that many Americans can’t afford to pay medical expenses in their country. Doing so could mean losing everything else. No one should have to make a choice between having surgery and losing their home. Shouldn’t access to healthcare be a human right? It makes you wonder, doesn’t it; how many people have actually chosen death over burdening their family with medical expenses?