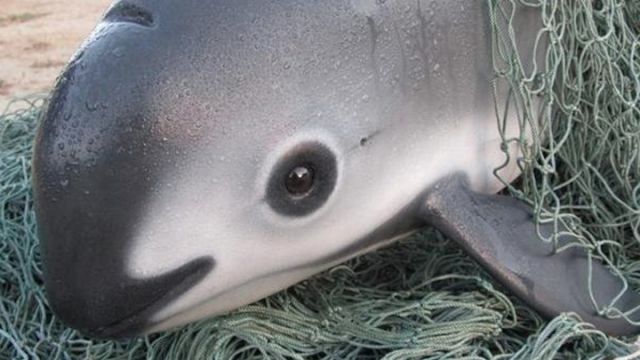 With less than 60 individuals left, the vaquita is the world’s rarest marine mammal. Researchers believe the species could be extinct within the next five years.

Vaquitas are like miniature dolphins, generally growing roughly four feet in length. A member of the porpoise family, they are often referred to as “little cows” and have cartoonishly adorable features. A somewhat reclusive species, they weren’t discovered by humans until 1958, and seeing one was such a rare occurrence that some started to believe they were only a myth. Vaquitas are only found in the Gulf of California, but spotting one now is even more difficult than before, as their numbers have dwindled to a critically endangered level. The average annual population decline is now over 30 percent due to unsustainable fishing practices.

Vaquitas aren’t hunted or fished directly, but their troubles come from being caught as by-catch in large fishing nets. In particular, it is the use of gillnets (large fishing nets that hang vertically and trap fish by their gills) in the Gulf of California that is snaring and drowning the little cows.

Fishing for totoaba was banned in Mexico in the 1970s, in order to preserve the species. As so often is the case, the ban would not stop some fishers from continuing to catch and sell the fish on the black market. In this scenario, the black market consists of sending products to China, where they are used in soup and for medicinal purposes.

Specifically, it is the bladder of the totoaba that has become valuable in China; it is believed to hold healing and curative properties. How or why this belief developed is up for some debate. Despite the ban on fishing totaba in the 70s, the black market demand from China has kept the practice alive, and recently it has begun to thrive.

Not only does the increased demand for black market totoaba bladder put survival of the totoaba at risk, but if actions are not taken to end these practices, it could be responsible for the extinction of the vaquita.

The extinction of the vaquita would have unknown impacts to the surrounding ecosystem.  Vaquitas are not picky eaters and generally feast on any fish species that shares a home with them, so eliminating a top of the food chain predator would allow some fish populations to increase. Sharks are the vaquitas only known predators, but the small porpoises only make up a small percentage of the sharks’ diet.  Still, taking away a food source from nearby shark populations would cause a disruption in the stability of the ecosystem.

What is being done?

In 2008, Canada, the U.S., and Mexico entered into an agreement that would provide financial compensation to Mexican fishers in exchange for agreeing not to fish inside designated vaquita refuge zones. Stipulations in the agreement would also provide local fishers with fishing equipment that is less likely to ensnare vaquitas as by-catch (i.e not gillnets). Unfortunately, enforcement of the agreements with local fishers is often difficult.

When the number of vaquitas dipped below 100 for the first time in 2014, Mexico implemented a two-year ban on the use of gillnets for fishing operations. In order to implement the ban, the government paid fishers to report any fishing operations that were in defiance of it. If the Mexican drug cartels have continued toboaba gillnet fishing operations, however, it could be risky for a local fisher to report on it.

Also in 2014, Greenpeace launched a massive letter-writing campaign directed at Mexican President Enrique Pena Nieto to also ban trawling operations in the area and extend the range deemed to be a vaquita refuge area. In response to the campaign, the Mexican government responded by saying “okay” and then did exactly what was recommended, proving that sometimes that sort of thing does happen.

In 2015, Greenpeace’s delinquent cousin, the Sea Shepherd Society, also decided to get in on the vaquita saving efforts. Sea Shepherd, an organization that has often been involved in dangerous marine based direct action campaigns, actually partnered with the Mexican government to patrol vaquita habitat, report poaching and remove illegal fishing nets.

With numbers as low as the vaquitas it can be easy to see why one would assume that all hope is lost. Should conservation programs be successful, it wouldn’t be the first time a species with such low numbers was brought back to a thriving population.

Take the Virginia northern flying squirrel for instance. Those winged nut-lovers were down to their final 10 individuals in the 1980s, a negative consequence of over-logging and habitat loss. Protective status along with habitat regeneration programs had their numbers up over 1,000 strong in 2013, demonstrating the strength that properly executed conservation programs can have.

The vaquita story has a chance to have a happy ending, but they will need the support of the public. The organization Viva Vaquita is a non-profit comprised of researchers and educators dedicated to saving the species. On their website, they list multiple ways that you can get involved to help save these critically endangered little cows.