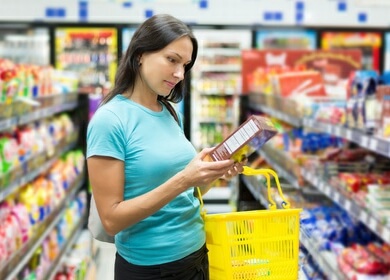 Many of us have heard time and time again that we should stay away from processed foods. However, the reasons why are not as well-known.

When reading the ingredient lists of packaged, canned and frozen foods, many unpronounceable words, chemical compounds and abbreviations can be found. Most of us do not have time to google each unknown ingredient while in the middle of a busy grocery aisle.

As a general rule, if you can’t pronounce an ingredient, it is best to steer clear. Real, whole healthy foods will usually have no more than five ingredients on the label. However, knowledge is power, and the more you know about the scary ingredients hiding within some of our most common food items, the more educated your choice to stay away from them will be. It’s easier to say no to that tempting pastry or pre-packaged entree when you know exactly why.

The following are 10 common food additives that can wreak havoc on your health:

Monosodium glutamate (MSG): A ‘flavor enhancer’ derived and processed from seaweed, MSG was originally associated with take-out Chinese foods. Today, it is a prevalent ingredient in a wide variety of processed foods, such as salad dressings, flavored chips, gravies and many sandwich meats, to name only a few. MSG is linked to numerous side effects, including skin rashes, numbness, nausea, heart palpitations, migraines and seizures.

In his book Excitotoxins: The Taste that Kills, Dr. Russell Blaylock classifies MSG as an excitotoxin that stimulates the cells to the point of damage or death, potentially triggering or worsening conditions such as Alzheimer’s disease, Parkinson’s disease and learning disabilities.

Aspartame: Aspartame, an artificial sweetener used in many ‘sugar-free’ products, is composed of aspartic acid, phenylalanine and methanol. Aspartame is responsible for the greatest number of reported side effects of any food additive, including dizziness, headaches and fibromyalgia and multiple sclerosis symptoms. Individually, aspartic acid has been linked to reactions including nausea, abdominal pain, anxiety attacks, sleep disorders, and depression.

Phenylalanine, an isolated amino acid which comprises 50 percent of aspartame, has been linked to seizures, insomnia and severe mood swings in large doses, among other symptoms.

Phenylalanine is especially dangerous to those with the genetic disorder phenylketonuria (PKU), and can cause mental retardation or death in people with this condition. Methanol is a neurotoxin and a known carcinogen, which breaks down into formic acid and formaldehyde, an embalming fluid, at 86 degrees Fahrenheit.

Carageenan: Carageenan is a thickening agent extracted from red seaweed and often used as a fat substitute in many food products, including processed meats, as well as cosmetics and pharmaceuticals.

In its processed form, manufactured via alkali chemical solvents, it can be hazardous to health. Some studies have linked carageenan to gastrointestinal disturbances including inflammatory bowel syndrome (IBS), intestinal ulcers and colorectal problems.

Bromiated vegetable oil (BVO): An emulsifier derived from corn or soy (usually genetically modified) combined with bromine, BVO is used in many citrus-flavored sodas. It also doubles as an industrial flame retardant. Banned from food use across Europe and in Japan, BVO has been linked to skin lesions, nerve disorders and memory loss.

Animal studies have found that it can cause behavioral and reproductive problems when consumed in large doses. Additionally, bromine is an endocrine disruptor, and inhibits the body’s ability to retain iodine, which is essential for tissue health.

Hydrogenated vegetable oil: Hydrogenated, and partially hydrogenated, oils are a fancy way of labeling trans fats. Trans fats appear in many fried, fast and processed snack foods, as well as some breakfast cereals and baked goods.

They are created by applying pressure and hydrogen to vegetable oils to create a semi-solid fat. Dieticians largely agree that there is no safe level of trans fats, and that they should be avoided entirely. Consuming them has been linked to heart disease, obesity, and multi-infarct dementia.

Butylated hydroxytoluene (BHT): A preservative used in some breakfast cereals, as well as a variety of other foods and cosmetics, BHT is also used in jet fuel, petroleum products and embalming fluid. A National Toxicology Program report published in 2005 states that BHT is, “reasonably anticipated to be a human carcinogen.”

It can also cause liver damage, and harm aquatic organisms, according to the Material Safety Data Sheet (MSDS). The MSDS also bluntly states that this chemical compound, “should not be allowed to enter the environment.”

Guar gum: Guar gum is a processed form of guar seed extract. It is used as a thickening agent in many foods, including gluten-free foods, and pharmaceutical bases. In large doses, guar gum has been linked to digestive blockages and other disturbances in digestive function.

According the a 2002 study published in the International Journal of Cancer, individuals who consume guar gum as a main source of fiber have a greater risk of developing colon cancer.

Caseinate: Caseinate is not to be confused with casein, a protein which naturally occurs in dairy products. Caseinate is the processed byproduct of casein, found in many commercial protein shakes and other protein supplements. To manufacture caseinate, the casein from skim milk is treated with calcium hydroxide and solium hydroxide, which are chemical alkalies. 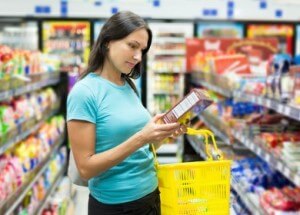 Chemical alkalies inhibit the body’s ability to absorb nutrients. Caseinate is processed at a high temperature, near boiling, which essentially changes the protein into an ultra thermolyzed protein, and creates MSG in the process. Caseinate has been linked to indigestion, allergies and heartburn, as well as an increased risk of colon cancer.

Remember, when choosing your ingredients, stick to what you can pronounce. If it sounds suspicious and you don’t have time to look it up, trust your instincts and stay away.