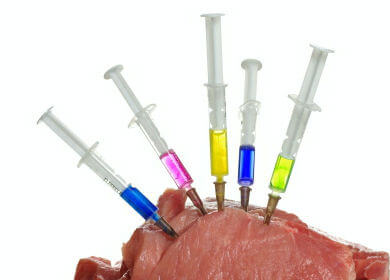 Mystery meat alert: lab-grown hamburgers may not be too far from hitting the market. The world’s first lab-grown burger was cooked and taste tested earlier this week at a news conference in London.

Created by a Dutch research team led by Professor Mark Post of Maastricht University, the artificial burger was made from the stem cells of a dead cow, which were grown into strips of muscle in a lab, and then fused into a patty. The panel that sampled the burger reported that while the texture was similar to that of meat, the taste was ‘strong,’ and not quite right.

Sound appealing? We think not. If sheer disgust at the thought of eating this does not ward you off, here are the top three reasons that lab-grown burgers are an all around bad idea.

1. The burgers are genetically modified, and filled with chemicals.

To create the artificial burger, Professor Post first extracted stem cells from dead cow muscle tissue. Then, in his lab, the cells were cultured with growth-promoting chemicals to help them multiply and grow. After three weeks, there were over a million stem cells. The cells were then placed into petri dishes where they coagulated to form strips of muscle.

Once the strips were formed, they were collected into pellets, and frozen. When enough pellets had been collected, they were defrosted and molded into a patty before cooking. The artificial meat starts out white. To make this colorless fake meat look more appealing, Helen Breewood, part of Post’s research team, is experimenting with adding myoglobin to add a red color. The resulting burger contains tens of billions of lab-created cells.

Dr. Fred Vagnini, the medical director for Heart, Diabetes & Weight Loss Centers of New York, says, “a downside could be that because it’s genetically engineered, there could be changes in the protein DNA that could make it carcinogenic… That’s a main negative component when it comes to GMOs, or genetically modified organisms.”

Furthermore, since there have been no long-term studies of the impact of GMOs on our health or the health of the environment, we really have no idea what the ramifications of these organisms will be.

2. The scientists behind the burger claim that they are responding to a predicted meat shortage, but this does not address the actual problem.

Professor Post and his team justify their project by explaining that there is a predicted, growing demand for meat worldwide, and the lab-grown burger is an energy efficient, space efficient way to supply it.

However, according to the latest United Nations Food and Agriculture Organization report on the future of agriculture, most of the predicted growth in demand for meat from Brazil and China has already occurred, and India is largely vegetarian. Many critics of the lab-grown burger technology simply recommend eating less meat.

Professor Tara Garnett, head of the Food Policy Research Network at Oxford University, does not think that artificial meat is a solution, and aptly summarizes: “We have a situation where 1.4 billion people in the world are overweight and obese, and at the same time one billion people worldwide go to bed hungry…

That’s (lab-grown burgers) just weird and unacceptable. The solutions don’t just lie with producing more food but changing the systems of supply and access and affordability, so not just more food but better food gets to the people who need it.”

It has been revealed that the lab-grown burger project was funded by Sergey Brin, co-founder of Google. He provided £215,000 ($330,000) to fund the technology. When we think about how many organic, sustainable farms could have been funded with this sum, or saved from bankruptcy, it seems atrocious. 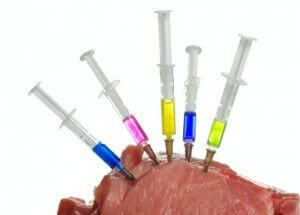 Putting more money towards artificial, GMO ‘foods’ is not in the best interest of our health, or a sustainable way of life. Monsanto is a multi-billion dollar company ($13.5B in 2012 according to their annual report) with what appears to be a very low prioritization assigned to health as demonstrated by all the health concerns associated with what they do.

This project seems to follow in the footsteps of technology deployed to solve food supply, but not food health. Shouldn’t health be the primary concern when it comes to food? We believe so.

When Professor Post was asked when lab-grown burgers would reach the market, he stated, “I think it will take a while. This (the taste test) is just to show we can do it.” Let’s hope this project is stopped dead in its tracks, unless we want our children’s children to grow up in a world where meat is grown in labs, pumped full of chemicals, and dyed to look ‘real.’