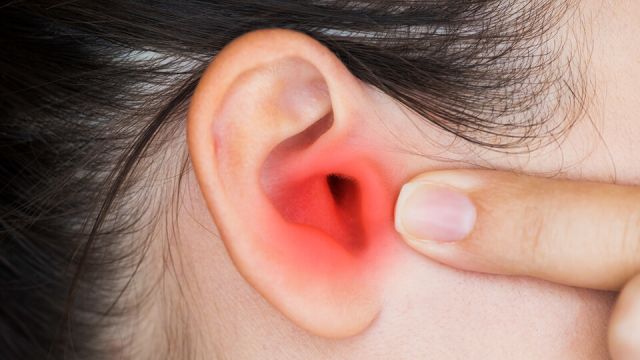 An ear ache might initially seem like something you can ignore and hope that it’ll go away, over time it can make your life almost unbearable. That constant throbbing never leaves your side, distracting you from your work, preventing you from doing the sports and hobbies you love, and even getting in the way of a good night’s sleep.

Children can find earaches particularly unbearable, and as all parents know this can quickly make your own life a whole lot more difficult as well!

While a trip to the doctor should probably be your first port of call if the pain is too much to handle of if you’re worried its an ear infection, conventional prescription treatments can often make the situation worse and generally fail to address the root cause of the earache.

Most of the time, a mild to moderate ear ache can be resolved with items you literally have lying around the house. Garlic, onions, hot water bottles, your shower…common everyday items from your home can be used as effective natural home remedies for ear aches.

The leading causes of ear aches

Most ear aches are caused by an infection in the ear. As bacteria take up residence in your ear canal, corresponding inflammation causes a buildup of pressure and a resulting aching sensation deep in the ear.

When you have an ear infection you often suffer from other symptoms at the same time: enlarged and sore sinuses, a sore throat, and puffy areas around the ears. If this is the case, it’s best to consult a doctor to ensure the infection isn’t serious and work out a solution that bests suits your needs.

But ear infections aren’t the only cause of earaches. Other causes or earaches include inflammation in other areas of the body, particularly the mouth and nose, skin infections around the ear, allergic reactions, trapped water in the ear, pressure changes, and certain chronic conditions.

Often, an earache can be resolved using simple household items and ingredients. Here are five home remedies for painful earaches.

The antibiotic powers of garlic are legendary, making it a commendable choice for a natural earache home remedy. A study published in the Journal of Antimicrobial Chemotherapy showed that garlic oil was able to effectively wipe out two invasive bacterial strains within eight hours. Another study showed that allicin, the naturally occurring antibiotic found in garlic, was able to directly inhibit the growth and development of common bacterial species.

Added to the that analgesic (pain alleviating) effects of garlic, and you have one seriously powerful earache remedy on your hands. The easiest way to harness the ear-soothing powers of garlic is to peel a few cloves of garlic, leave them to sit for five to ten minutes (this increases their allicin content), then press them to extract their juice. Then use an eyedropper to place two to three drops of the garlic juice into the affected ear, leave in for ten minutes, then drain.

Why not make it a big old culinary party up in your ear… first garlic, now onion! Onion is another great choice for natural earache remedies as it’s almost always hanging out in the pantry, and like garlic it’s loaded with antibacterial and antiseptic compounds. In addition, the organosulphur compounds in onion promote scavenging of oxidative free radicals, inhibiting the oxidation of fatty acids and reducing inflammation. Considering most ear aches have an element of inflammation, that’s an important point to consider.

To treat an earache with onion, you can either extract the juice and add a few drops to the ear as you did with the garlic, or simply crush quarter of an onion, wrap it in a clean cloth and hold the cloth over your ear for ten minutes, twice daily.

It took me a while to realize just how powerful a little bit of heat is in clearing up a stubborn earache, but once I recognized it’s value there was no going back! There something about a short burst of heat that helps to alleviate inflammation, ease discomfort, and get your earache on the road to recovery sooner rather than later. And if the cause of your earache is a wax or water blockage, applying heat to the affected ear should help with that too.

My go-to is simply a heat pack which I throw in the microwave for a minute or two until it’s hot, but not too hot to touch. I then put it under my ear as I lie on the couch or in bed for 20 minutes or so, and repeat that twice a day for best results. If you don’t have a heat pack, you can make your own with an old sock and some rice (be sure to put a cup of water in the microwave when you heat your heat pack), or simply use a hot water bottle instead.

If the cause of your earache is an infection, ginger might be just the ticket. Not only does ginger boast some serious antibacterial abilities, it’s also anti-inflammatory and an effective analgesic.

Ginger can be used in much the same way as garlic and onion to treat and earache: either use a press to squeeze the juice out of fresh ginger root and add a few drops to your ear twice a day, or grate a teaspoon of fresh ginger into a tablespoon of olive and leave to infuse for 20 minutes. After the 20 minutes is up, warm the oil slightly then put a few drops into the affected ear.

Speaking of olive oil, it can also be used on its own as an effective ear ache remedy. Olive oil provides rapid relief from an ear ache by lubricating the ear canal and treating any possible infections that might be contributing to the pain. Warm olive oil also helps to break up hardened wax, which can often cause discomfort in the ear.

In a pan, heat extra virgin olive oil until it’s warm to the touch – make sure it’s not too hot! Then use an eyedropper to put two to three drops into the affected ear while lying down. Leave the oil in for at least ten minutes, and repeat twice daily.