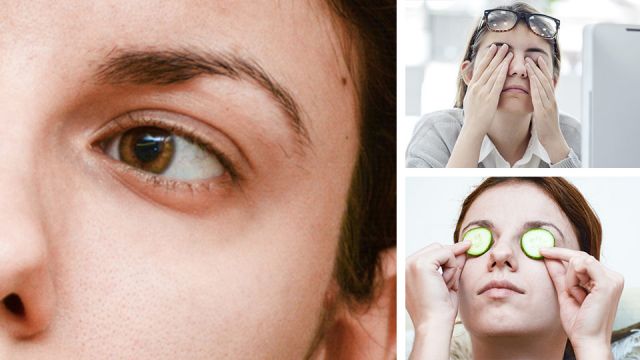 Nothing makes you feel tired more than looking tired, and those dark circles under the eyes are enough to make anyone feel exhausted. Our modern, stressful lives don’t help: long hours in front of the computer screen at the office are murder for your eyes, while stress and lack of sleep only add insult to injury. Those stubborn dark circles can be a real pain, but luckily there are a few natural ways to reduce them.

Before trying anything else…

The best way to deal with dark circles under your eyes is to deal with the causes. Try to minimize your time in front of computer or television screens, catch up on lost sleep and be sun-smart. Avoid excessive drinking and stress, and you might notice some improvement. You also may want to consider being tested for allergies, which can also be to blame for those dark circles.

These lifestyle changes can be quite effective at both improving your overall health and reducing dark circles under the eyes, without resorting to further treatment.

Still no luck? Try these…

Potatoes get a pretty bad rap sometimes. Between all that starch and the fact that they’re all too often fried to a crisp, potatoes might not always be the healthiest choice diet-wise, but they can be surprisingly good for your skin. Along with containing vitamins A and C, potatoes can also naturally lighten skin. This makes them great for reducing dark circles under your eyes.

To try for yourself, refrigerate a few spuds, then slice them. Use the slices just like cucumber, placing over the eyes for half an hour or so. After a week or two, you should notice a distinct change in coloration.

Classic cucumber: go to any day spa, and odds are you’ll be staring at a few slices for a while. Alas, does cucumber actually do anything to reduce those dark circles under your eyes? Turns out, the answer is “yes… probably.”

Studies have found evidence to suggest cucumber juice can reduce swelling and heal damaged skin. In fact, one study even found that cucumber might be just as good as most off-the-shelf beauty products when it comes to reducing wrinkles. Plus, cucumber is scientifically proven to be really, really good at moisturizing, and is great for just generally making your skin look healthier.

So what are you waiting for? Grab a few slices, find a good spot for relax and let that cucumber work its magic!

This old folk remedy has been around since the dawn of time — or at least since the dawn of commercially-available tea bags. Just refrigerate a few used tea bags, then place over the eyes. Chamomile is the most common choice, though pretty much any tea will apparently work.

Got milk? If so, then you’ve also got one of humanity’s best sources of lactic acid, which happens to be an alpha hydroxy acid (AHA). AHAs are commonly used in skin care products because these gentle acids are good at helping the skin retain moisture. Obviously, applying milk to your face can be a bit messy, so the best route is to use a washcloth. Soak the cloth in milk, then apply to those dark circles for 10 to 20 minutes every second day. Wash off afterward.

Like milk, natural yogurt is also good for moisturizing the skin. Unlike milk, it’s a bit easier to apply. Just smear some yogurt over the desired area, massaging it in gently. As you might expect, you’re going to want pure, natural yogurt for this.

Got any remedies of your own? Let us know in the comments below!