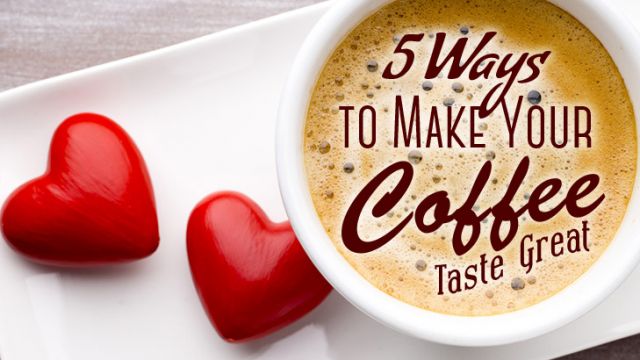 When it comes to brewing a great cup of coffee, I’ll admit I take it pretty darn seriously. Whether you’re a coffee connoisseur or you simply enjoy a supermarket blend, these flavorful yet healthy tips are guaranteed to make your coffee taste great until the very last drop.

In their pursuit for a perfect brew, researchers recently studied the effect of how bean temperature affected the grind process and ultimately coffee flavor. The study tested beans from four countries: Guatemala, El Salvador, Tanzania and Ethiopia. Chilled coffee beans offered greater post-grind consistency, showing a narrower distribution of fine particles, meaning the smallest particles were closer in size to the largest particles.

Researchers found that an even grind yields more flavor from the same amount of coffee grains. Therefore the simple act of keeping your beans chilled will give you a stronger, more flavorful cup.

When I first heard about adding organic virgin coconut oil to coffee, I was skeptical. It sounds strange and perhaps even gross but hear me out — it actually makes an excellent replacement for highly processed coffee creamers that offer you no nutritional value. In addition, combining caffeine and saturated fat gives your body a wonderful boost of energy.

Coconut oil, a saturated fat, is a superfood full of health-promoting properties. In fact, coconut oil fuels your metabolism and boosts your thyroid.  In addition, coconut oil:

Brew your coffee first, then place it in a blender with one tablespoon of organic coconut oil. The result is a frothy and rich brew with a wonderfully smooth taste that is very satisfying and rivals any processed creamer.

Cinnamon is warm, aromatic and can turn a ho-hum cup of coffee into a treat. But no one likes that cinnamon sludge that sits on top after sprinkling. So here’s a little trick: Fill your coffee filter with coffee grounds and generously sprinkle on the cinnamon — then brew as usual. No more sludge, just a great tasting cup of coffee.

Back in the day, some restaurants and coffee houses actually sprinkled salt in the filter to reduce bitterness and mellow out a blend. But cinnamon works better, tastes better and has a host of nutritional benefits.

There are two main types of cinnamon:  Ceylon cinnamon, also known as “true” cinnamon, and cassia cinnamon, which is the common variety found in supermarkets. Which is best? Well, Ceylon (or true cinnamon) is best when it comes to your health. Supermarket brand cinnamon (cassia) contains high levels of coumarin, which can be harmful for the liver and kidney when consumed regularly. So while Ceylon is pricier, it’s the healthier choice.

Some benefits of true cinnamon:

Add a little cocoa to your coffee

For extra flavor in your coffee, try adding a little organic unsweetened cocoa to your cup. Cocoa is loaded with antioxidants and associated with all sorts of health benefits. In fact, according to a study published at Bio Med Central, cocoa may help prevent cardiovascular disease. Cocoa is also known to  enhance the production of “feel-good” chemicals in the brain, including serotonin and dopamine. That means a little cocoa goes a long way to elevate your mood and help you feel less depressed.

If you must add sweetness to your coffee add a little non-caloric stevia or, better yet, raw honey. Besides giving your coffee a rich flavor, raw honey is a great source of nutrients, says Dr. Axe.

Some benefits of honey:

Get ready, set and brew!

Just remember the best cup of coffee begins with fresh beans, so avoid bulk beans from supermarket bins — oxygen and bright light aren’t the best combo for roasted beans. In addition, grind your own, but make sure that your equipment, from bean grinder, filter to coffee maker, is thoroughly cleaned after each use. Chill and store your beans in an airtight container, and always use a good clean source of filtered water.