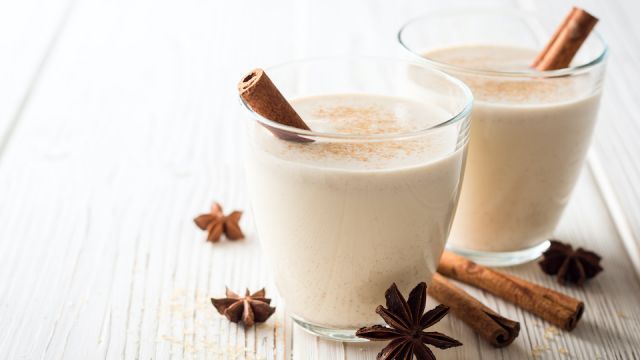 Cinnamon is a warming spice that can be used in both sweet and savory cooking. But cinnamon is more than just a delicious additive to our favorite recipes, it has a wealth of health benefits that make is a star super spice. If you’re anxious to welcome fall a little early, these yummy drinks will help get you in the mood, even when the temperature outside is still soaring.

Cinnamon contains cinnamaldehyde and cinnamic acid, both of which have antioxidant properties that help inhibit cell damage caused by free radicals. The antioxidants in cinnamon have anti-inflammatory effects, which may help lower your risk of disease.

These delicious drinks will help you enjoy the health benefits of cinnamon on daily.

This delicious and healthy vegan cinnamon latte tastes just like the $5 one from your favorite cafe – only cheaper…and healthier.

Enjoy all the deliciousness of apple pie in a healthy form with this creamy, cinnamon-spiked smoothie.

Sometimes your sweet tooth wins, and you need to satisfy a craving fast. Garnish this sweet treat with whipped cream and sprinkle with cinnamon and dark chocolate shavings for an extra layer of sweetness.

This 4-ingredient gut tonic tastes just like warm apple cider – but it’s super healthy. Drink it to help with digestion, get rid of bloat, speed up weight loss, and boost your immunity.

This spiced version of the classic favorite will wake up your taste buds and convince you that chocolate, cinnamon, and cayenne is a match made in heaven.

The ingredients of this little potion are all packed with nutrients that can help nip a cold in the bud or keep your immune system in fighting form.

With so many different hot, cold, sweet, and spicy cinnamon drinks to enjoy, try whipping one up for every day of the week!