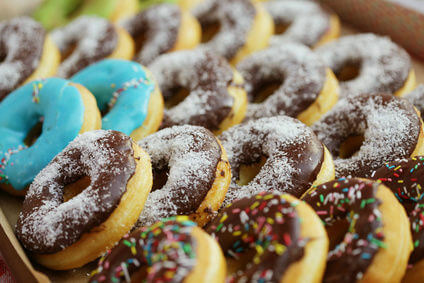 They smell so good, especially when they are warm. Do you, like millions of other Americans salivate when you pass the donut shop or the bakery in your grocery store?

You are not alone, that is for sure, donuts are among the top favorite foods of Americans, and according to the Baltimore Sun newspaper, the average person eats 63 donuts per year. Most don’t stop with one but eat two at a sitting.

These fried, full of sugar and white flour “treats” contain anywhere between 200 to 375 calories each which includes almost zero nutritional value. However, this does not seem to slow down consumption.

In light of America’s love affair with donuts, today is National Buy a Donut Day, believe it or not. We actually have a day declared to buy a donut. Do we have a National Buy a Bunch of Beets Day – nope!

So, just what are the reasons why we should NOT buy a donut on National Donut Day?

Although there are some gluten-free varieties, the majority of donuts contain gluten, the wheat protein that is very difficult to digest. Modern, commercial wheat is in most cases highly processed, and doused in pesticides and insecticides right from the seed stage, throughout the storage process, all the way to the final product. Even in the case of organic wheat, Dr. Mercola has stated that in his experience, about 75 percent of the population would benefit from avoiding wheat altogether.

According to CBS News chief medical correspondent, Dr. Jon LaPook, gluten can cause inflammation that damages the lining of the small intestine, making the body unable to absorb essential nutrients, such as calcium. Gluten sensitivities are more popular than ever, with an increased consumption of processed foods. Signs that you may be gluten intolerant include; fatigue, bloating, constipation, brain fogginess, headaches and even infertility.

No matter which type you choose, donuts contain a boatload of sugar. If you choose one with glazing, jam or cream – the amount skyrockets. A chocolate glazed donut may contain 5 teaspoons of sugar or more.

According to the American Heart Association, women should only consume 6 teaspoons of sugar in a day. If you consume donuts regularly or other similarly sweet treats or beverages you may experience problems with your blood sugar – including sugar crashes.

Just released study statistics in the journal, Nature Communications, reveal just how deadly sugar really is. There really are NO safe levels of sugar.

Mice who were fed a diet comparable to ours along with the recommended 25% “safe” amount of daily sugar experienced symptoms associated with toxicity. This is groundbreaking news as previous animal studies fed mice amounts of sugar that were disproportionate to the sugar in the average American diet. This study is highly personal, and one which everyone should heed.

Sugar consumption in our country has increased 50% since the 1950′s, right along with obesity, diabetes, metabolic disorders and heart disease. This is not a coincidence, and now that our research tools are reaching highly sophisticated levels it is becoming easier to prove what many have thought all along – sugar is toxic!

#3 Donuts May Make You Fat

The Family Doctor tells us that about 3,500 calories equal 1lb. If you ate one donut a day, along with your regular diet and did not work the calories off, you will gain about one pound every 10 days.

Donuts are highly refined and highly processed. They are mostly sugar and white flour, simple carbohydrates for which the body has no use. Refined carbohydrates contain no fiber at all. Fiber is necessary to keep blood sugar and cholesterol levels in check and also to maintain a healthy digestive system. Donuts are essentially empty calories.

Acrylamide is a cancer-causing and potentially neurotoxic chemical which is created when carbohydrate-rich foods are cooked at high temperatures. Foods cooked above approximately 250 degrees F may contain acrylamide.

Potatoes, chips, french fries, donuts, toast, processed snacks and roasted breakfast cereals contain some of the highest amounts of this toxic offender. Cooking methods such as baking, frying, broiling and even roasting are most likely to produce acrylamide. The higher the heat and the longer the cooking time increases the amount of this chemical.

Just one donut can meet your maximum allowance for trans fats for the whole day. Trans fats can increase cholesterol and triglycerides which increases your risk of heart disease and contribute to obesity. One more reason not to eat processed foods, especially those containing refined sugar and trans fats: they have been linked to anger and aggressive behavior.

A study performed at the University of California surveyed 945 men and women about their trans fat intake, as well as their levels of aggression. When the survey results were adjusted for outlying factors, such as age and use of alcohol and tobacco, researchers found a strong link between aggressive behavior and the consumption of high levels of trans fats.

Lead author Beatrice Golumb says, “we found that greater trans fatty acids were associated with greater aggression. This adds further rationale to recommendations to avoid eating trans fats as their detrimental effects may extend beyond the person who consumes them.”

The connection between trans fats and anger is thought to have to do with their inhibition of the body’s ability to metabolize omega-3 fatty acids. Past studies have linked a lack of omega-3′s with antisocial behavior and depression, so the anger connection is not too surprising.

So, now that you have 6 reasons NOT to buy a donut today, or any day really, what will you snack on instead?