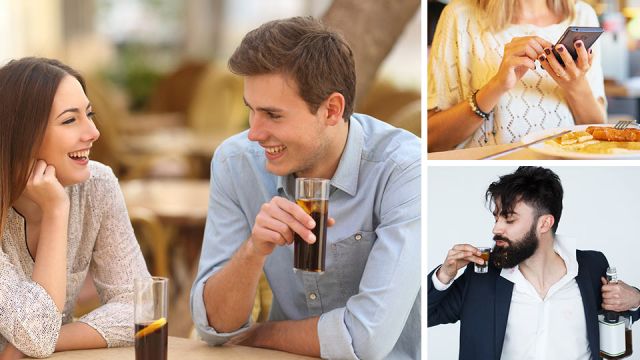 We’ve all been there, those horrifying first dates you can’t wait to ditch. And believe me, I’ve had some doozies. How about picking up your blind date only to discover his mother was coming along? Or, finding out, six months later that the reason he stood you up was that he’d been in jail. Okay, so I was the first person he called after getting his cell phone back, but still! Then there was the time when my super-hot first date turned out to be a long-lost cousin. We all learn from our mistakes, right? (Long sigh) Here are some first date red flags you should probably be wary of.

1. They show up drunk

True story: after agreeing to go on a blind date (courtesy of my best friend), not only did he show up drunk and try to French kiss me “hello,” but he brought along a fresh change of clothes — just in case I couldn’t resist his charm. Needless to say, throwing up in a bucket of popcorn was probably a huge red warning flag.

2. Their crazy ex is hiding in the bushes

Believe me, nothing good comes from finding someone hiding in your bushes. If he or she tells you they have a crazy ex-stalker — believe them! And then tell them to sort out their baggage before getting involved with you.

3. He or she is head over heels for you way too soon

Some may call this love at first sight, but I disagree. If your date talks about the color of eyes your kids will have on a first date, then that’s a red flag. To be honest, even talking about how many kids you want on a first date is a deal breaker. Is she looking for a sperm donor or a love connection? When someone you’ve just met, who doesn’t know anything about you, declares their undying love for you, then you’re probably being “love bombed.”

According to Dr. Dale Archer for Psychology Today, love bombing is a manipulative tactic used by someone who attempts to influence another person with over-the-top gestures of attention and affection. Love bombing, says Dr. Archer, includes lots of romantic conversation, talks about “our future,” and long periods of staring into each other’s eyes. And it works because we all need to feel good about who we are, but we often can’t fill this need on our own. Love bombers are experts at detecting low self-esteem and then exploiting it. But the thing is, love bombers are also insecure. So, to boost their ego, they choose someone who at least seems like a great “catch.”

If your date is genuinely infatuated with you and has no psychological agenda, then the romantic gestures won’t stop and actions match words. But, if the attention shifts from affectionate and loving to controlling and angry, then run fast!

4. He pulls out coupons on your date

First dates are all about making great first impressions. So, when my friend, Julie, was asked by her date where she’d like to go for dinner, she picked one of her favorite restaurants. But then he told her he didn’t have a coupon. When she asked him what restaurants he did have coupons for, he said McDonald’s and KFC. She wasn’t impressed.

5. She orders the most expensive item on the menu

If you tell your date to order anything she wants off the menu, fair game. But if you’re ordering a burger and fries, and she’s asking the waiter, “What’s the most expensive bottle of champagne you carry?” then head for the bathroom and keep going until you get to your car. Trust me, she’s using you and that’s big red flag!

6. You remind him of his ex

This can go two ways. He’s either still in love with his ex or it’s not a compliment. Either way, he’s not over his ex, and that’s a deal breaker. Because if his heart is full of emotions like love or hate for someone else, there’s positively no room in there for you. So, you’re likely just someone to get him over the hump or be a sounding board. And you’re just too good for that.

7. You tell him you have a cat, and he tells you he hates cats

Let’s face it, not everyone loves animals. And while you certainly don’t expect him to love your cat like you do, you don’t expect to see him holding her over the balcony railing either. The bottom line: If he or she tells you they hate cats or dogs, believe them. You’ll have a tough time converting this person into an animal lover, if all they see is a cat that needs meds or a dog that needs a muzzle.

8. Your date is more interested in their phone than you

Unless he or she has a family member on life support, there’s really no excuse to constantly check a cell phone. If they can’t manage to stay focused on you for longer than 10 seconds, then my guess is they’re either checking their Tinder account or waiting for a reply from the person they’d rather be with.

Times are tough, which means that he or she may still live at home with the parents — and that’s okay. But if your date is pushing 40 and he lives in his mother’s basement, she does his laundry and cooks his meals, then you may have found Peter Pan (the boy who never grows up) and that’s a big red flag. Although Peter Pan syndrome can occur in both sexes, generally more men than women are affected, suggests Science Daily.

There could be several reasons why someone still lives with their parents, but “Peter Pan” types live with mommy because they’re incapable of growing up and taking on adult responsibilities. Also, they usually prefer to wear clothes more suited for teenagers. Trust me, I’ve dated Peter Pan, and unless you’re Wendy, he’s no picnic. These types usually lack ambition, have no concrete plans for the future and are all-around commitment-phobes.