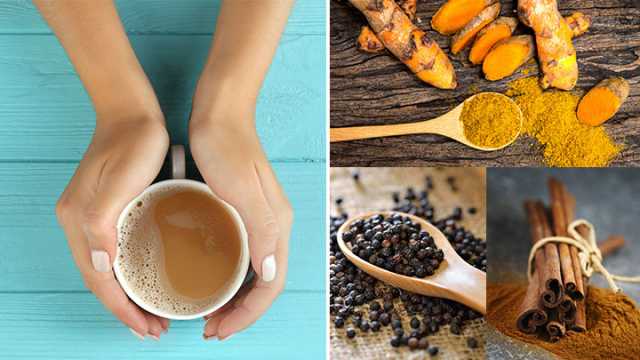 I have a morning routine that consists of adding a few key ingredients into my cup of brew for the sake of fighting inflammation. Here is why you should consider adding turmeric, ground pepper and cinnamon to your own mug of coffee.

Why is chronic inflammation dangerous?

Chronic inflammation is linked to problems ranging from arthritis to Alzheimer’s, diabetes to hair loss. In fact, uncontrolled inflammation plays a large role in almost every major disease, including heart disease, cancer and even depression.

It’s for these reasons that I add three simple ingredients into my coffee each morning. Because when it comes to fighting inflammation, every little bit helps.

You don’t need a lot of turmeric, but here’s why you should add it to your morning coffee. Curcumin, the main compound found in turmeric, is widely known and accepted for its antioxidant, antiviral, antifungal and anti-inflammatory properties.

Research from the Journal of Cancer Prevention suggests that turmeric consumption in India is high. Residents consume it fresh, in root form or in dried ground form — up to four grams per person, per day. Research goes on to report that overall cancer rates are significantly lower in India than in Western countries, which is attributed (among other factors) to the high levels of curcumin consumed.

The Arthritis Foundation suggests adding 0.5 grams to 1 gram of powdered root three times per day to reduce painful inflammation associated with arthritis. That’s about 0.1 to 0.2 of a teaspoonful.

Consuming turmeric on its own has a relatively low bioavailability, which is why I add ground pepper to the mix. One way that our liver gets rid of foreign substances is to make it water soluble so that it can be excreted. But piperine, a molecule in black pepper inhibits this process. And you don’t need a lot. If you consumed turmeric you would see a small rise in your bloodstream, since your liver is aggressively trying to get rid of it.

According to research published in the Journal of Pharmacology and Experimental Therapeutics, just a small amount of black pepper can suppress that process, shooting up turmeric’s bioavailability by a whopping 2000 percent! In fact, even just a pinch of pepper can significantly boost turmeric’s bioavailability. And, truthfully, it does not alter the taste of coffee one bit.

Cinnamon does more than just flavor your coffee. This aromatic spice, reminiscent of sweet rolls, has anti-inflammatory properties that can ease swelling, according to research. Cinnamon is also loaded with antioxidants, such as polyphenols.

Other research published in the journal Evidence–Based Complementary and Alternative Medicine, reports that cinnamon also possesses:

In addition, it has also been reported that cinnamon may benefit neurological disorders, such as Parkinson’s and Alzheimer’s diseases.

Ditch refined sugar for honey instead

For people like me, who have an insatiable sweet tooth, not adding sweetness to coffee makes for a rather boring cup. But instead of using refined sugar, I opt for a little raw honey.

Raw honey contains antioxidants called phenolic compounds, and some kinds of honey even have as many antioxidants as fruits and vegetables. And, if you can get your hands on a jar of real manuka honey from New Zealand or Australia you can pump up your coffee with potent antifungal, antibiotic and antibacterial properties. Honey also has a lower glycemic index than table sugar, which simply means that the sugar in honey is absorbed into the bloodstream more gradually.

When it comes to manuka honey, just make sure you’re getting the real deal by choosing products stamped with either a KFactor, or UMF rating. These are internationally-recognized trademarks that guarantee the presence of required manuka ingredients DHA (dihydroxyacetone), methylglyoxal and leptospiren.

For those who choose a vegan lifestyle, you can sweeten your coffee with maple syrup, brown rice syrup, agave, molasses and date syrup.

Add coconut oil to coffee instead of creamer

I admit, I like organic cream in my coffee, and it goes great with the four ingredients above. However, when I choose to go without cream, I use coconut oil. I know that may sound strange, but hear me out. If you’re dairy intolerant or just prefer to go dairy free, adding coconut oil gives coffee a creamy consistency, similar to that of coffee creamer (non-dairy alternative), but without all of the added chemicals.

In fact, non-dairy creamer can hardly compare to real cream at all, since it more closely resembles a chemical cocktail emulsified with oils, refined sugars and milk products. And if you’re still using non-dairy creamer, consider this: A study on non-dairy creamer published in Science Direct found that adding it to your coffee increased your risk of heart attack and LDL (“bad”) cholesterol.

In fact, even adding organic or raw dairy (which is much healthier than coffee creamer) may interfere with your body’s absorption of the beneficial antioxidants contained in coffee, according to research. But non-dairy creamer is by far worse, often containing corn syrup, partially hydrogenated oil, dipotassium phosphate, and other synthetic ingredients.

On the other hand, the main fats in coconut oil are caprylic acid, lauric acid and capric acid. Although most fats take much more effort from the body to be digested, coconut oil is digested much easier. Since coconut oil is a medium-chain fatty acid, it’s processed by the liver. That means it is converted into energy rather than stored as fat. However, if you must have cream, choose old-fashioned organic cream. Go for organic, raw varieties from grass-fed cows.

How to pre-mix a coffee batch

Boosting your coffee with beneficial inflammation-fighting spices doesn’t have to be complicated or time-consuming. I premix a batch of turmeric, cinnamon and pepper in a shaker, and simply shake it into my coffee. Or, if I’m making a single cup of brew, I often add a few good shakes into the one-cup coffee filter, which leaves nothing floating around the surface. Adding these beneficial spices to your morning cup of brew can certainly contribute to better health.

I  also recommend organic, shade-grown coffee. It’s important to avoid non-organic coffee as it could be coated in pesticides and even mold. That’s why I like to drink Lucy’s Bru Organic Whole Bean Coffee. And for a limited-time, you can get a bag for free!