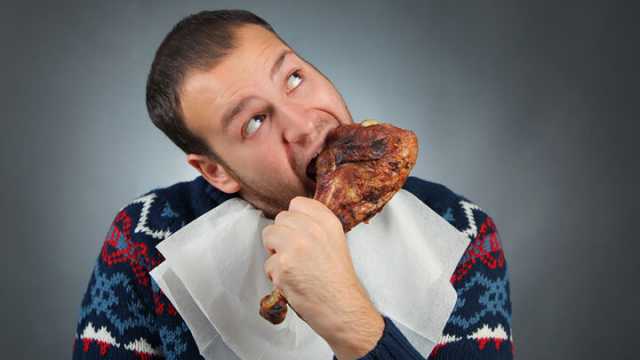 The idea of going vegan elicits a strong reaction from people, both positive and negative. To many, the idea of eliminating all animal products from their diet and other practices seems impractical — impossible, even. Furthermore, many people have trouble identifying or relating with vegans, seeing it as an extreme point of view that might not mesh with their more centered sense of self-identity.

…I have never used the term “hogwash” before, but I believe it is appropriate in this case. Hogwash. There are plenty of practical, healthy and downright reasonable reasons to go vegan, or at least try it out for a month.

Before anything like this is attempted, however, it is always best to consult with a doctor, naturopath or just someone who seems smarter than you are. Everyone has unique dietary needs, and playing around with your diet without having all the facts first is never advisable.

Of course, the same advice should be given to anyone planning on putting away a pound of wings or a baconator on any given weekend.

Is going vegan good for the environment?

As Arnold Schwarzenegger, former Governor of California/Terminator, once said, “Go part-time vegetarian to protect the planet.”

Unfortunately, going vegan is an issue that is muddied with bad science and misinformed filmmaking. But if you look hard enough you can separate the good science from the bad.

According to current scientific consensus, greenhouse gas emissions from meat account for 14 to 19 percent of the global total. Those numbers have been somewhat disputed by the documentary “Cowspiracy,” but are, in general, the most widely accepted measurement of how much the meat industry is contributing to climate change.

Additionally, livestock production takes up 30 percent of land on the planet, and 70 percent of all land used for agriculture. Compared to other food sources, meat production is an extremely inefficient process. It takes five to 15 pounds of grain just to produce two pounds of beef.  All that grain also requires water and energy, not to mention it needs to be transported, creating even more greenhouse gas emissions in the process. In terms of an environmental footprint, meat is one of the least efficient foods you can put in your body.

That being said, many people find the idea of giving up meat too difficult and dismiss the idea altogether. This “all or nothing” mentality probably does more damage to the environment than what is helped by those who do take the vegan or vegetarian plunge completely. Simply starting with one meatless day a week is still a great way to reduce your personal ecological footprint. Although still in its infancy, there is a growing movement of people who are going part-time vegan or vegetarian, or simply following the diet for a month, just as Schwarzenegger recommends.

The fact is that animals have the capacity to suffer. The life of an animal inside a factory farm is almost solely a life of suffering. There is nothing natural about breeding an animal in captivity for the purposes of eating it. While humans have evolved into apex predators, the trend of sentient apex predators developing empathy for their prey and choosing a diet that doesn’t result in suffering is one of the most beautiful things that exists in nature (FYI: we’re nature too).

It’s hard to blame alligators, sharks or wolves for not empathizing with their food sources, then learning agriculture instead. However, humans have evolved to the point where that is an option for us. In the end, going vegetarian or vegan is a personal choice. But, it’s one that many people feel really good about after having made it.

Is a vegan diet healthy?

Veganism has many supporters, like Bill Clinton, saxophonist/husband of a woman who lost the election to Donald Trump. He said, “I might not be around if I hadn’t become a vegan.”

As with omnivore diets, going vegan can either be healthy or unhealthy, depending on how closely you monitor what you are eating. Unfortunately, there are plenty of examples of vegans or vegan parents who were not monitoring their diets closely enough. Sadly, in some cases, this has led to tragedy. Similarly, there are numerous examples of people who succumb to unmonitored omnivore diets that ultimately lead to diabetes, obesity or death. No matter if you eat animal products or not, if you aren’t paying attention to the nutrition going into your body, you run the risk of ill-health.

Get your blood checked, first

Before starting a vegan or vegetarian diet, you absolutely must get your blood checked by a doctor. To do otherwise is super-silly. This lets you know if you are healthy enough to do so. After adopting the diet for a period, have a doctor check your blood again and note the differences. Then you and your doctor can look at what you can be adding and taking away from your diet so that you can reach your optimum health.

There are a few general guidelines that new vegans or vegetarians can follow, but everyone’s body is unique. It would be foolish to adopt a new lifestyle without first getting your blood checked and talking with a doctor.

First steps to take for new vegans or vegetarians

1. Keep a food journal for a minimum of one week. Record everything, down to the very last Triscuit you ate at 1 a.m.

2. Talk to your doctor (soon, because of “you-know-who”) and get your blood checked.

3. Identify non-vegetarian or non-vegan foods in your food journal and research replacements (a good starting point can be found here).

4. Assuming your blood tests turn out fine, begin a vegan or vegetarian diet for a month. Use the substitutes you identified in step #3. If you’re feeling fine, you can even go longer than a month.

5. Have a doctor check your blood to ensure you are at optimum health. If not, continue to make adjustments. Speak with a nutritionist who specializes in such diets, if needed.

Should I be super-annoying to others about my diet?

OMG — no! Unfortunately, it is the case that sometimes people snicker at or have a poor opinion of vegetarians or vegans. This can occur as a result of people having had poor interactions with aggressive vegans or those who (consciously or unconsciously) talk down to others who haven’t adopted the same lifestyle.

Group identity plays a large role in the opinions and ideologies that any of us adopt. So, if non-vegetarians or non-vegans feel unaccepted by (or unable to relate to) vegans and veggies, they are far less likely to adopt the lifestyle themselves.

The best way to promote vegan or vegetarian lifestyles is to be polite and understanding to those who are not. When given the opportunity, respectively state the reasons you have chosen to go vegan or veggie. Emphasize how happy you are with your choice. Doing so will increase the likelihood that more people will choose a cruelty-free lifestyle as well.