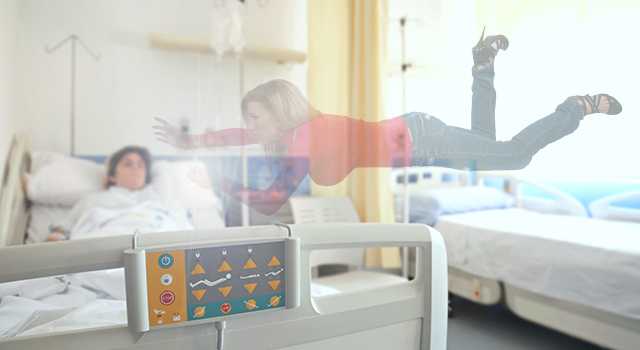 Many people who have come close to death later report a near-death experience. Near-death experiences (NDEs) typically include leaving the body, often through a tunnel and being engulfed in light or darkness. The effects of an NDE are often powerful and life-altering.

Those who’ve come back to share their experience offer us a glimpse into the afterlife that includes feelings of indescribable love, peace and a spiritual presence. But are these experiences real or merely an illusion from a dying brain? You be the judge. Here are three stories about NDEs and the indelible imprint left on each near-death experiencer.

You might be surprised to discover that Nobel Prize-winning author Ernest Hemingway had a near-death experience. Unable to pass the military physical because of poor eyesight, Hemingway enlisted as an ambulance driver for the Red Cross during World War I. According to Biography, in 1918 he was sent to Italy, just four miles from the Austrian front. There, Hemingway spent his days driving a boxy ambulance and his nights drinking in a cafe.

Wounded by shrapnel while fighting on the banks of the river Piave in Italy, Hemingway soon found himself convalescing in Milan, writes Dr. P.M.H. Atwater, author of “Beyond the Light.” It was there that he wrote a letter to his family, making the following cryptic statement: “Dying is a very simple thing. I’ve looked at death and really I know.”

Years later, Hemingway told a friend what had happened on that fateful night in 1918.

“A big Austrian trench mortar bomb, of the type that used to be called ash cans, exploded in the darkness. I died then. I felt my soul or something coming right out of my body, like you’d pull a silk handkerchief out of a pocket by one corner. It flew around and then came back and went in again and I wasn’t dead anymore.”

Hemingway remained deeply affected by his out-of-body/initial near-death experience throughout his life, and was never again as hardened as he once was.

In her book “Dying To Be Me” Anita Moorjani recounts her near-death experience. In April of 2002, she was diagnosed with Hodgkin’s lymphoma, a cancer of the lymph nodes in the immune system. After four years of struggling with cancer, Moorjani’s body, riddled with tumors, began to die. And then in February of 2006, she slipped into a coma. Surrounded by loved ones and a medical team, doctors said she would not survive the night. As she lay in the hospital bed, Moorjani soon found herself outside of her dying body witnessing the events that were unfolding in her hospital room. She could see her body lying on the hospital bed. She could see outside the room, she could even see her brother boarding a plane in another country, on his way to see her.

Suddenly free from the pain afflicted by cancer, she was in a state of jubilation. The lesions on her body seemed to have healed. She no longer required a ventilator or a wheelchair to move. Yet, as she tried to connect with her family she couldn’t understand why they couldn’t see the joy she was feeling.

“There was no white tunnel effect in my case,” Moorjani told The National. “I was told the tunnel effect happens when you die suddenly, like in a car accident, where your soul gets sucked out. I died gradually, and so my experience was different.”

Soon Moorjani entered another dimension, where she experienced profound peace and love. She also learned many things about life, and the laws of life, including how she had caused her own cancer.

“When I went into this other dimension, I felt an overwhelming sense of love and peace. I felt no pain. I found out my purpose in life and what I must do. I realized that the solution to my cancer was always within me,” Moorjani says.

Then, she was offered a choice: stay on the other side, or return to Earth. At first, Moorjani did not want to return to a body ravaged by cancer. But after being reassured that her body would heal itself, she chose to return and share with others what she learned. To the amazement of her doctors, Moorjani woke up from her coma. In four days, 70 percent of her cancer had cleared. Then in five weeks, she was free of the disease. Specialists at the hospital declared her case a miracle.

Near-death experiences are controversial, and Dr. Eben Alexander considered himself a skeptic — that is, until he experienced his own NDE. Dr. Alexander, a highly trained neurosurgeon had operated on thousands of brains during his career.  He believed that what people of faith call the “soul” was merely a product of brain chemistry. NDEs, he thought, were simply fantasies produced by brains under extreme stress.

Then came the day when Alexander’s own brain — the part that controls thoughts and emotion — was attacked by an extremely rare form of meningitis. For seven days Alexander lay in a hospital bed in a deep coma. But as he lay there with no recognizable brain activity he had already begun his journey to the other side.

In his book “Proof of Heaven,” Alexander talks about entering a place of darkness without memory, language or time. But then he was rescued from that void by a spinning melody of light. “It was a rip in the fabric of reality,” claims Alexander. He then entered a hyper-vivid world filled with brilliant colors and millions of butterflies. And as he flew by, flowers blossomed and opened. And by his side was an unknown presence — a beautiful, blue-eyed woman. They communicated, not by words, but through conscious thought.

What he heard was, “You are loved, you are cherished.” In fact, he was also told, “We will teach you many things, but you will go back.” On the seventh day of his coma, he awoke. Within weeks Alexander had made a full recovery. Alexander now says he believes are souls are eternal. But his story doesn’t end there.

Alexander wondered why his guide on the other side was a woman unknown to him, rather than someone he had loved. In fact, his father who had passed four years earlier, was also a neurosurgeon. Alexander loved and idealized him. So then, why wasn’t he there to meet him? Why the blue-eyed girl instead?

Alexander had been adopted as a child, and many years later he had found his birth family — except for one. His birth sister had died before Alexander had a chance to meet her. Betsy was 36 years old when she passed, and all that Alexander knew about her was that she was a beautiful, loving soul. Four months after Alexander had come out of the hospital his birth sister Cathy brought him a picture of their departed sister, Betsy. When he opened the envelop, to Alexander’s amazement, he was looking at the same blue-eyed woman who had met him on the other side.

Near-death experiences are reported by almost 200,000 Americans each year. In fact, studies around the world suggest that NDEs are a common human experience. So the question remains, do you believe near death-experiences are real?