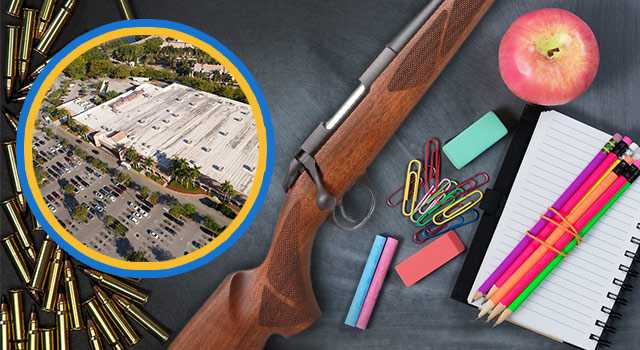 Walmart itself was quick to respond, tweeting, “Yes, this is terrible, Jordan. This sign had no business there and was taken down as soon as we were alerted. We are very sorry. -Dean.”

Leeanna May, a woman who apparently took the controversial photo, but posted it to a private Twitter account, told the Washington Post that she saw the display at Walmart’s Evansville store last Wednesday morning, days before many kids were due back to school. “We’ve already lost so many innocent lives to guns. People don’t seem to honestly care,” she said.

Walmart returned to selling rifles, shotguns and ammunition in hundreds of U.S. stores in 2011, as the company sought to attract more male customers. The move followed a decrease in gun products at the store five years beforehand after diminishing sales. Since then the store has been fluctuating up and down in its promotion of guns.

In 2015 the store came under renewed pressure to stop selling guns, after Dylann Roof killed nine African Americans in Charleston, South Carolina. At the time, a U.S. senator pointed out that stores like Walmart needed to “recognize the danger of having these guns displayed right next to an aisle away from microwave popcorn and and Xbox games.”

Does Walmart take marketing too far?

This isn’t the first time that Walmart has come under fire for its careless marketing. In July, the chain store was attacked for using a racist term to describe a wig cap it was selling online, describing the color as “n***** brown.”

Last year, a Walmart store went so far as to use Coca-Cola products and packaging to build a large model of the World Trade Towers, under a banner that said, “9-11-01: We Will Never Forget.”

How do you feel about this latest marketing incident from Walmart? What part of the Walmart store do you think is an appropriate place for it to sell and market its guns and ammunition?