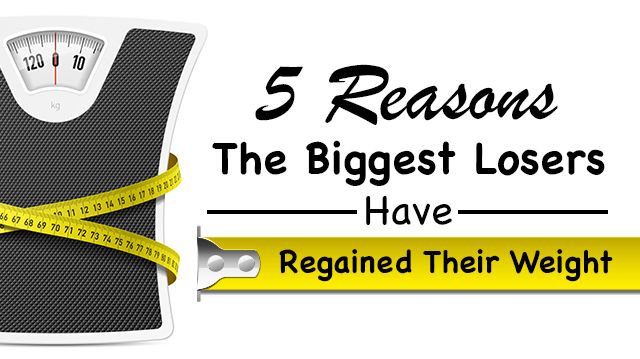 NBC’s The Biggest Loser, a show known for its incredible weight loss makeovers, is in the hot seat following a study that revealed former contestants couldn’t manage to keep their weight off. The truth, it seems, is no matter how dedicated you are to a diet, or how many hours you put in exercising, no one — not even “The Biggest Loser” — is immune to traveling back down the road to obesity. Here are five reasons why experts say their weight gain was inevitable.

Metabolism slowed to a crawl

Resting metabolism determines how many calories a person burns when at rest. At the season eight opener of the The Biggest Loser, the contestants, although morbidly obese, had normal metabolisms for their size. So, they were burning a normal number of calories for people of their weight.

When the season ended, Kevin Hall, an expert on metabolism at the National Institute of Diabetes and Digestive and Kidney Diseases studied the contestants and documented what happened to them after the show ended. What he found may explain why yo-yo dieting happens post-weight loss. It seems that the contestant’s metabolisms slowed dramatically, during and after the competition, making it difficult to maintain the weight loss. Their bodies were no longer burning enough calories to maintain their thinner frame. In fact, 13 out of the 14 contestants studied regained their weight, with four contestants heavier now than they were at the start of the competition.

Previous studies have found that everyone’s metabolism slows down after a diet. But the shocking reality was that over the next several years, the contestants’ metabolisms did not recover and return to the normal rate for a person of their size. Instead, their metabolisms slowed even more, causing the pounds to come back on. For season eight winner Danny Cahill that meant gaining back 100 of his 239-pound loss.

Robert Huizenga, the show’s doctor, expected the contestants’ metabolic rates to fall after the show ended, but didn’t expect such a drastic drop. Maintaining weight loss is difficult, Huizenga said, which is why he tells contestants to exercise at least nine hours a week and monitor their diets to maintain weight loss.

They lost a key hormone

But slower metabolism was not the only reason the contestants regained their weight. Once again, at the beginning of the season, the contestants started out with normal levels of leptin, a hormone that plays a critical role in appetite and weight control. However, by the season’s end, contestants had almost no leptin at all, which would leave them feeling starved for most of the day.

As the contestants’ weight returned, according to research, their leptin levels slowly raised, but only to about half of where it started at the beginning of their diet. This may explain the urge to eat more after weight loss.

In a one-year study funded by Australia’s National Health and Medical Research Council, Dr. Joseph Proietto and colleagues recruited 50 overweight people to consume a mere 550 calories a day for eight or nine weeks. On average, they lost nearly 30 pounds. However, over the next year, the pounds crept back on.

“The body puts multiple mechanisms in place to get you back to your weight,” said Dr. Proietto. It seems the only way to maintain your weight loss is to be hungry all the time.

Winner Danny Cahill, who served as a focus in the study, told The New York Times what it took to lose his weight. Cahill quit his job just to maintain his exercise schedule, and in the end, he knew he could not maintain his final weight of 191 pounds. Once he went back to his job, the pounds started coming back.

Cahill set a goal to eliminate 3,500 calories each day, with the hope of losing a pound a day. His grueling and unrealistic exercise regime began with a 5 a.m. run on a treadmill for 45 minutes. After breakfast, he ran on the treadmill for another 45 minutes. After a brief rest he hopped on his bike and rode to the gym. There, he worked out for two and a half hours.

After riding home he would rest for an hour and then drive back to the gym for another round of exercise. It’s easy to see why his routine was completely unrealistic and unmanageable with day-to-day living and work. If Cahill had not burned enough calories, he hit the gym again after dinner and then followed up with a run around the neighborhood until his calorie-burn indicator reset to zero.

“We are all fat again,” former Biggest Loser contestant admits. Suzanne Mendonca, a 36-year-old New York-based police officer who lost 90 pounds when she appeared on season two in 2005, told the New York Post she was eating baby food. She also complained people were passing out in the doctor’s office. Today Mendonca says she takes blood pressure pills and is prediabetic.

According to trainer Bob Harper, each contestant consumed enough daily calories for their height, weight, age, gender and metabolic complications. But he also urged the contestants to eat every four hours to prevent binge eating. However, previous contestant Kai Hibbard, who claims she developed an eating disorder while on the show, spoke out against the program saying contestants were only eating between 1,000 and 1,200 calories a day.

While it’s possible to lose weight initially on many diets, extreme diets with restricted calories require such a drastic change that you can only follow them for a short period of time. By restricting what you eat, you ultimately lose weight but you never learn how to turn around bad habits.

They simply lost weight too fast

The problem with fast weight loss is that it usually takes extraordinary efforts in diet and exercise (efforts that could be unhealthy and unrealistic) for permanent change, suggests the Mayo Clinic. One to two pounds per week is what most doctors recommend. However, it seems that the contestants on The Biggest Loser were encouraged to drop more weight in less time.

In certain situations, faster weight loss can be safe if it’s done the right way. For example, your doctor might prescribe a very low calorie diet for rapid weight loss if obesity is causing you serious health problems. But without proper medical supervision, the weight would be extremely difficult to keep off, says the Mayo Clinic.

On a positive note, while the study found flaws in rapid weight loss, it also opened doors for science to delve deeper into the obesity epidemic. Furthermore, it allows former dieters to feel less guilty about their own weight gain, and understand that sometimes just focusing on eating better and exercising more is a healthier alternative to stressing about those extra pounds.