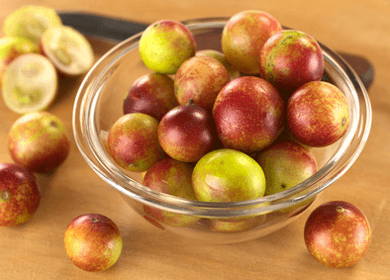 Growing wild along the riverbanks throughout the Amazon rainforest are camu-camu bushes.  The fruit they produce is nature’s alternative to expensive and often ineffective vitamin C supplements.  Along with the antioxidant and phytochemical benefits of other berries, the camu-camu berry boasts a higher natural vitamin C content than any other known plant – and the benefits do not end there.  It has been shown to prevent diabetes, arthritis, depression, gum disease, and even cancer.

Native to South America, the camu-camu (Myrciaria dubia) bush takes four or five years to bear its extraordinary fruit.  The resulting berries are approximately the size of grapes, with purple or red skin and a yellow pulp.  They are extremely sour in flavor, and are usually distributed in powder form.

As the vitamin C found in camu-camu berries is a natural food form, rich in bioflavenoids, it has been shown to be significantly more effective than synthetic vitamin C.  Along with immune support, vitamin C appears to balance hormonal mood changes, and increase serotonin levels in the brain.

In 2008, the Journal of Cardiology conducted a week-long study of 20 male smokers, half of whom were given camu-camu berries every day, and half of whom took a comparable dose of commercial vitamin C tablets.  The group that was given the berries showed a notable decrease in inflammation and oxidative stress, while the other group did not. 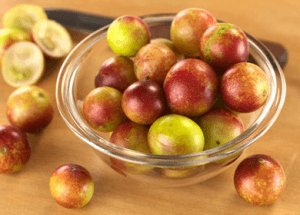 Additionally, a 2010 study published by the Journal of Agricultural and Food Chemistry revealed that camu-camu contains ellagic acid, a substance that has tested anti-diabetic effects, according to some research.

What’s more, camu-camu berries have antibacterial properties, and can be applied directly to the skin to guard against infection in case of a small cut or injury.  Simply squeeze juice from the fresh berries, or sprinkle a bit of power from the flash-frozen form, onto the would and let this berry work its magic.  Add a little honey or raw sugar, and it’s smoothie-ready as well!