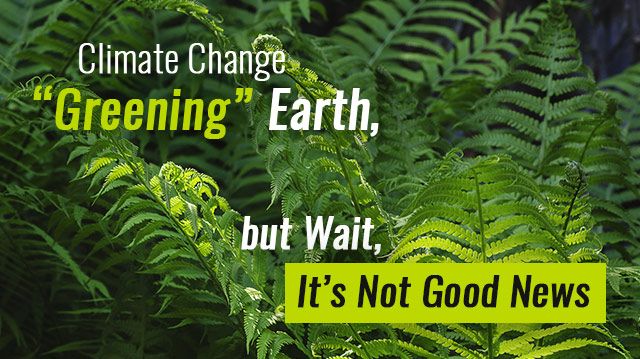 Everyone loves a green, lush environment, right? Sure, but the fact that the earth is getting progressively greener is actually bad news. Extra green expanses across various parts of the globe are actually a result of increased carbon dioxide emissions and signal trouble in the environment.

A recent study, “Greening of the Earth and its Drivers,” written by 32 authors across 24 international institutions, was published in the journal Nature Climate Change and it presents some startling evidence. Using data collected over decades by NASA and the National Oceanic and Atmospheric Administration (NOAA) satellites, the authors found a significant greening has taken place over a quarter to one-half of the planet.

While that’s good news for the plants, it’s bad news for us. “The greening over the past 33 years reported in this study is equivalent to adding a green continent about two-times the size of mainland USA (18 million km2), and has the ability to fundamentally change the cycling of water and carbon in the climate system,” said lead author Dr. Zaichun Zhu, from Peking University.

In a press release associated with the study, co-author Dr. Philippe Ciais, Associate Director of the Laboratory of Climate and Environmental Sciences, addressed the contrarian argument lauded by individuals like Lord Ridley — hereditary peer in the UK House of Lords — and Rupert Murdoch, founder of News Corporation, Fox News Channel and more. These men have argued that plant growth is “evidence” that cutting carbon emissions to offset climate change is unnecessary; the plants simply take care of the problem.

But that’s not the case at all.

In short, the plants can’t keep up, even if there are more of them

However, Professor Judith Curry, the former chair of earth and atmospheric science at the Georgia Institute of Technology, pointed out: “It is inappropriate to dismiss the arguments of the so-called contrarians, since their disagreement with the consensus reflects conflicts of values and a preference for the empirical (i.e. what has been observed) versus the hypothetical (i.e. what is projected from climate models). These disagreements are at the heart of the public debate on climate change, and these issues should be debated, not dismissed.”

The authors point out that other factors may be contributing to the greening of the earth — nitrogen concentration, shifts in land management, climate change — but it is the increased carbon dioxide levels that have caused such a change in growing patterns. It’s worthy noting that contrary attitudes aren’t helping the situation.

As the earth continues to warm and our climate continues to change based on our actions, we may find ourselves in a very uncomfortable spot. We need to get on the same page when it comes to climate change, before it’s too late.