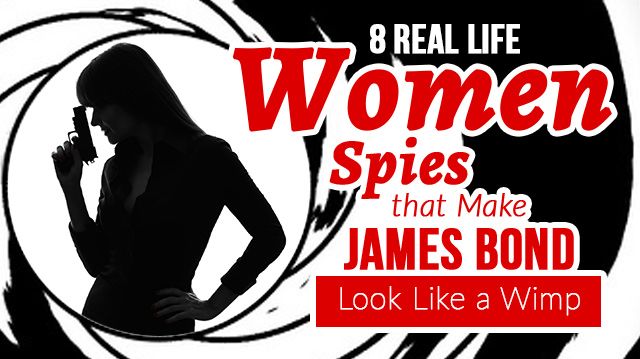 Fictional British secret agent James Bond has access to some neat gadgets, but he has also been accused of misogyny, racism and consumerism. Women, for him, are the trophies he gets after he completes his mission, and his enemies tend to be Russians and Cubans with cheesy evilness and unrealistic accents.

The real world however, runs a gamut of complex, daring, and creative spies, most of them managing without any gadgets. Interestingly, eight real life spies with amazing stories were, in fact, women.

Kawashima was a Chinese princess raised in Japan. She worked as a spy for the Japanese Kwantung Army, forming a counter-insurgency cavalry force of around 5,000 former bandits to hunt down anti-Japanese guerilla bands. She was executed in China in 1948.

During the American Revolutionary War, Smith Strong, an ardent patriot, devised a washing line signal system. She hung clothes in a certain order to communicate with American spy Abraham Woodhull the location of fellow spy Caleb Brewster’s whaleboat, so that Woodhull could find him and pass along the messages for General Washington. She would also hide the boat in different places.

Named public enemy number one with a 5 million-franc Nazi bounty on her head, Wake was a British Special Operations Agent during World War II. She was a leader of the French Resistance, and her 7,000 maquisards caused the deaths of 1,400 German soldiers while only suffering 100 themselves. She also joined Capt. Ian Garrow’s escape network and, despite the Germans tapping her phone line and watching her round the clock, they were never able to capture her.

Working for the British World War II spy agency SOE and then the CIA, Hall used her prosthetic leg to smuggle information. In occupied France she mapped drop zones, found safe houses and trained commandos. In 1942, when Germany took control of all of France, Hall was ordered to leave and did so hiking through the snowy Pyrenees mountains, despite her missing leg.

Born into slavery, Bowser was freed as an adult and eventually became a source of intelligence for Elizabeth “Bet” Van Lew’s Union Army spy ring. Van Lew was an abolitionist and fought for the Union during the American Civil War. Bowser, a brilliant woman with a photographic memory, posed as a dense yet responsible servant working in the Confederate White House. People assumed she couldn’t read and left important papers in the open, which Bowser memorized and fed to Van Lew.

Norwood’s true identity wasn’t exposed until she turned 87. Her initial response, reportedly, was “Oh dear. I thought I had got away with it.” As assistant to the director of one of Britain’s atomic research centers, she passed the secrets of the atom bomb to Russia for 37 years. Both her parents were active in Socialist circles, and she herself joined the Communist Party in 1936. Her husband also was a Communist and the son of Russian parents. She said she was not paid to spy but rather did it to “help prevent the defeat of a system that … had given people food.”

A World War I spy and a writer of spy novels, Cnockaert was recruited as a British intelligence agent to spy on German military personnel. She also sabotaged a phone line used by a priest who was spying for the Germans. She was caught after placing explosives under a German ammunition depot and served two years in prison.

Better known as an entertainer, Baker smuggled information using invisible ink on her sheet music. She wore a lot of professional hats: erotic dancer, singer, actress, civil rights activist and French resistance spy, but it was her entertaining skills that gained her access to embassy and ministry parties and those attending. When World War II broke out, she was recruited by French military intelligence to gather information about German troop locations from officials at the parties. Her fame allowed her free movement, and she would carry information to England on her sheet music. After the war she returned to the United States, where she was active in the civil rights movements and received death threats from the KKK. In 1963, Baker was the only official female speaker at the March on Washington, where Martin Luther King gave his “I have a dream” speech.

It’s worth asking ourselves why we have heard of Ian Fleming and Bond, but few of us have heard of the likes of Cnockaert and Bowser. There are a lot of assumptions to be aware of when judging people’s physical and mental ability, and courage. Braveness is so strongly associated with men, yet so often women (and other oppressed groups) who quietly, or not so quietly, face the real hardships and overcome them.