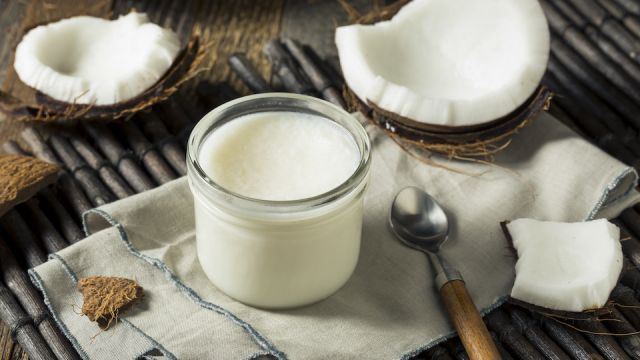 You would have to have been living under a rock for the last five years or so not to have heard of the amazing benefits of coconut oil. Classified as a “superfood,” coconut oil has numerous health benefits, mostly due to its unique combination of fatty acids. What is important to understand is that while coconut oil is a saturated fat, it is a fat like none other; a fat that contains a plethora of potent medicinal properties. So, don’t get disturbed when you hear that coconut oil is a fat…it is a fat that is capable of blasting the unwanted fat in your body and doing so much more. This fat deserves a front-row seat in your pantry!

Coconut oil is not your “ordinary” fat

The healthy saturated fats in coconut oil have different effects on your body than most of the other fats in your diet. The fats in coconut oil increase the fat burning powers in your body and provide your brain with quick energy. In addition, they also elevate the good HDL cholesterol in your blood, which helps to reduce your risk of heart disease.

The majority of fats in a “normal” American diet are long-chain triglycerides, whereas the fats found in coconut oil are medium-chain triglycerides (MCTs). Simply put, this means that fatty acids are shorter than most other fats. When you eat these shorter chain fatty acids, they go directly to the liver where they can be accessed as a quick source of energy or turned into ketones.  Ketones are produced when the body burns fat for energy and, are highly beneficial for the brain.

Although coconut oil is becoming more popular in the West, it is still considered an exotic food. In some locations, coconut (which is loaded with coconut oil) is a staple that people have consumed for many, many generations. In these people groups, such as the Tokelauans, from the South Pacific, 60% of their daily calories come from coconuts (including coconut oil). This group of people is in excellent health, with extremely low rates of heart disease. The Kitavans are another group of people that eat mostly tubers, fish, fresh fruit, and coconut. This group, like the Tokelauans, is also in outstanding health with a noticeable absence of heart and stroke issues.

Obesity is a growing health concern in America that has reached epidemic proportions. Almost 70 million adults in this country are obese. Obesity rates now exceed 35% in nine states. While how much we eat is important in the control of weight and metabolism, equally, if not more important is the nature of those calories consumed. Not all foods impact our body or hormones in the same way. The medium-chain fatty acids in coconut oil increase fat burning when compared to consuming the same amount of calories from long-chain fatty acids. This truth was demonstrated in a study that found that 15-30 grams of medium-chain triglycerides per day increased 24-hour energy use by 5% or 120 calories per day.

For many, belly fat (AKA muffin top) can be a source of great frustration. Even if you eat a healthy diet – belly fat can be an issue. Abdominal fat is extremely dangerous, linked to several serious Western diseases, and difficult to get rid of. It seems that once it takes up residence, it becomes like a stubborn goat, unwilling to respond to anything you might try. The good news is that coconut oil is effective at reducing this stubborn fat found in the abdominal cavity and surrounding the vital organs.

One study found that women with abdominal obesity who supplemented their diet with two tablespoons of coconut oil per day had a significant reduction in BMI and waist size over the 12 week study period.

It is the healthy fat in coconut oil that helps crush those mid-afternoon cravings that often lead to overindulgence in unhealthy food items. Researchers attribute this unique characteristic of coconut oil fat to the way in which fats are metabolized. Ketones that are produced can have an appetite reducing impact. In one research study, men consumed varying amounts of medium and long-chain triglycerides. It was found that men who ate the most medium-chain triglycerides also consumed 256 fewer calories per day. It was also discovered, in another study, that men who ate the most medium-chain triglycerides at breakfast ate fewer calories at lunch.

Adding coconut oil to your diet

Clearly, coconut oil is not like any other saturated fat; it has amazing therapeutic properties and can have a positive impact on fat burning, which puts it in a fat class all of its own. If you wish to add this superfood to your diet, make sure that you add the right kind of coconut oil. The best is unrefined, organic, and virgin. In addition, be sure to consume coconut oil from an ethical source that is fair trade certified.

Here are some great ways to get more coconut oil into your diet:

Aim for two tablespoons a day of this highly nutritious and delicious healthy fat!