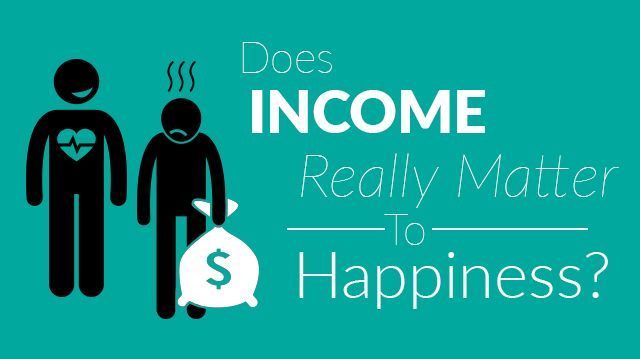 The idea that money can’t buy happiness has been around for a long time. Not surprisingly, people with a comfortable standard of living are happier than people who live in poverty. But how much money do you need to make you happy? Will a million or even a billion dollars buy you happiness? Or is there more to this life than money?

Happiness is internal, but there is a price

Princeton University researchers Angus Deaton, PhD, a prominent economist, and Daniel Kahneman, PhD, a notable psychologist — both Nobel Prize in Economic Sciences winners — looked at the relationship between income and happiness by analyzing responses to the Gallup-Healthways Well-Being Index. The daily survey asks approximately 1,000 US residents a number of questions regarding their well-being.

After analyzing over 450,000 responses, Dr. Deaton and Dr. Kahneman found that happiness actually springs from two psychological states: life evaluation and emotional well-being. Through their research, they also determined the price of happiness.

How you view your life

Although the two psychological states are connected, the difference between life evaluation and emotional well-being is quite important because each refers to different feelings. Life evaluation is just that — a long view of your overall life. We evaluate our lives based on our achievements, Dr. Kahneman and Dr. Deaton suggest. If we accomplish the goals we’ve set for ourselves and are financially secure and emotionally fulfilled, then we’re more likely to have a high evaluation of our lives.

And according to Dr. Deaton and Dr. Kahneman’s research, the more conventional our goals are, the better our life evaluation will be. Apparently the best life evaluations come from people who went to college, got married and have good jobs, Dr. Deaton says. What’s most important for life satisfaction? “Having goals that you can meet,” Dr. Kahneman says. On the other hand, “setting goals that you’re not going to meet sets you up for failure.”

How you feel about your life

Your emotional well-being reflects how you feel about your life — the emotional quality of your everyday experience. “Emotional happiness is primarily social,” Dr. Kahneman notes. Spending time with people we like makes us most happy.

Loneliness makes people miserable, but so does extreme poverty. However, loneliness, no matter how rich you are, will still leave you unhappy. Nevertheless, according to research, you won’t become happy merely by hanging out with good friends or achieving lifelong goals — you need cold hard cash.

So how much does happiness cost?

For ultimate happiness, you need a positive life evaluation, emotional well-being and $75,000, according to Dr. Kahneman and Dr. Deaton’s research. They suggest that people with an annual household income of $75,000 is what’s needed for a well-rounded and happy life. Furthermore, it stops there, meaning you really don’t need any more than that amount to be happy.

And if you’re thinking $75,000 won’t go far in a big, expensive city, according to Dr. Kahneman, $75,000 seems to be the ceiling for even expensive places. Incomes over $75,000 don’t equate to more happiness. This may be because when living in expensive cities, $75,000 is still enough to live on while allowing for emotionally rich and enriching social experiences, states Dr. Kahneman and Dr. Deaton’s research.

Then there’s the lottery — what about those people who’ve struck it rich, aren’t they happier? A study published in 1978 in the Journal of Personality and Social Psychology compared Illinois State Lottery winners with non-winners and with people who had suffered an accident that left them paraplegic or quadriplegic. Each group answered a series of questions designed to measure their happiness level.

So if the magic number is $75,000, then why do we continue to work so hard once we’ve reached an income level that’s suppose to make us happy? One reason may be that our ideas about the relationship regarding money and happiness are misguided, suggests The New York Times’ Elizabeth W. Dunn and Michael Norton.

In research conducted by Dunn and Norton for The Journal of Positive Psychology, they asked people from across the income spectrum to report their own happiness and to predict the happiness of others. What they found was that a striking inconsistency surrounds the relationship between money and happiness.

We devote a lot of our time and energy earning money, seemingly motivated by the belief that money will have a substantial impact on our overall life satisfaction. In fact, during their research, Dunn and Norton found that people thought their happiness would double if their income doubled. But the data suggested that those who made $55,000 a year were only nine percent more satisfied than those who earned $25,000.

Research also indicated that what we actually do with our money plays a bigger role in happiness than how much money we actually earn. We usually think that having more money will allow us to buy the stuff we really want: bigger houses, fancy cars, etc. But this, says Dunn and Norton, is ineffective in turning money into happiness.

For some, $75,000 may not be enough moola to pay the bills. So what then — move to a smaller home or less expensive city, trade in the SUV for a compact? Within 10 years, I’m sure the ceiling will raise and then happiness will peak at $100,000. Personally, I feel the answer lies in a figure that exceeds poverty, but there will always be a ceiling. As the old adage goes, “Money can’t buy happiness.” No matter how much money you make, if your spouse, children or friends don’t want any part of you, driving a Porsche or living secluded in a mansion isn’t going to make you happier.