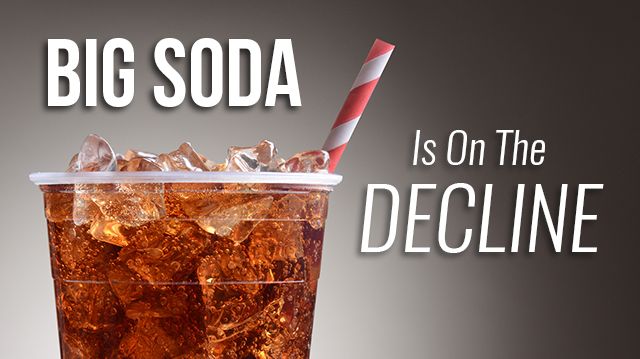 After decades of Big Soda ruling the beverage industry, the popularity of soda is finally declining in the US. In fact, the amount of soda Americans drank in 2015 was the lowest it’s been in 30 years, new data compiled by Beverage Digest shows.

The decline suggests that people are finally getting the message that soda makes you fat and destroys your health. Unfortunately, the data also revealed that Americans are replacing their soda with other sugary beverages that might not be any better.

Why is soda so bad?

For starters, soda contains astronomical amounts of sugar. Large amounts of plain sugar is bad enough, but the sugar used in soda is usually high fructose corn syrup, which research suggests is even more dangerous than white sugar. High sugar consumption, even of plain old white sugar, is linked to all kinds of health problems, including obesity, diabetes, organ damage, inflammation and even cancer.

And sugar is not the only problem with soda. The phosphoric acid found in drinks like Coca-Cola depletes minerals like calcium and magnesium, which over time can lead to osteoporosis. Some sodas, including Pepsi, also contain the possibly carcinogenic ingredient 4-MEI, which has been linked to infertility, thyroid dysfunction, as well as liver and lung cancer.

Big Soda tries to rebrand itself

Soda companies are desperately trying to compensate for Americans’ decreasing soda consumption by marketing sodas as “premium” drinks. They’re packaging their products in smaller cans and bottles, charging higher prices and replacing high fructose corn syrup with table sugar. However, these adjustments may be too little too late, as it appears that public-awareness campaigns have finally convinced Americans that the health risks outweigh the pleasure when it comes to soda.

Unfortunately, much of the rest of the world will likely continue to suffer as soda companies successfully target other countries, particularly developing nations, to make up for lost sales at home. In 2014, according to a study published in The Lancet, Chile overtook the US to become the country whose population consumes the most calories of soda per capita. According to the same study, rates of soda consumption are also very high in countries like China, Thailand, India, Mexico and Brazil.

What are Americans drinking instead of soda?

Although it’s great that Americans are putting down the soda, some of the beverages we’re picking up instead may be just as bad or worse. According to Beverage Digest, sales of “liquid refreshment beverages,” including fruit drinks, energy drinks, sports beverages, and ready-to-drink coffee and tea, have been increasing for the past few years.

Although many Americans see these beverages as healthier alternatives to soda — probably because they’re often marketed this way — this couldn’t be further from the truth. Many of these drinks contain just as much sugar as soda, and energy and coffee beverages contain even more caffeine. Furthermore, most of these drinks, including store-bought juice, contain artificial colors, flavors and preservatives.

Beverage Digest also found bottled water sales to be increasing steadily. In fact, according to at least one projection, bottled water will overtake soda as the largest beverage category within the next two years. Although replacing your soda with water is a great idea, bottled water is not the way to go for both environmental and health reasons.

It’s well known that plastic bottles are terrible for the planet; they fill up our landfills, pollute our water and take literally hundreds of years to decompose. But even putting aside the environmental concerns associated with bottled water, we are still left with the fact that bottled water is often not the “natural,” “pure” and “healthy” alternative that it claims to be.

There’s no proof that bottled H20 is safer or healthier than what comes out of the tap. In fact, some bottled water is literally just tap water that is bottled, extremely marked up and features a picture of a mountain or stream on the label to make you think it comes from somewhere it actually doesn’t.

So what’s the takeaway?

In a nutshell: Don’t replace your soda habit with other sugary, highly processed beverages, and step away from the bottled water! Healthy drink options include filtered water, nut milks, whole milk (for those who can tolerate dairy), green smoothies, fresh juice (in moderation), herbal teas and many others. There are so many delicious and nourishing beverage options available to us, there’s no reason to drink things that make us sick.

Still can’t give up soda and other sugar drinks? Check out these recipes for healthy sodas you can make yourself!