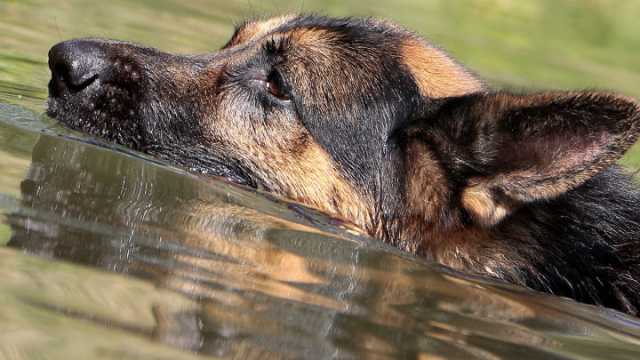 Animal movies, while often heartwarming, can sometimes mask the darker side in the entertainment industry. Recently, TMZ published a minute-long (edited) video showing a German Shepherd in apparent distress while being forced to perform a stunt for the upcoming film “A Dog’s Purpose.”

Just short of the new movie release “A Dog’s Purpose,” video emerged (dating back to November 2015). Hercules, a German shepherd, appears terrified to jump into churning water to shoot a scene for the movie. While the video’s authenticity has not been verified, it also appears to have been somewhat edited. The video shows a handler attempting to force Hercules into turbulent water for about 40 seconds. The video then skips to show the dog almost drowning, prompting people to rush over, seemingly in an attempt to rescue the animal.

“A Dog’s Purpose” producer Amblin Entertainment and distributor Universal Pictures told CNN that the production team “followed rigorous protocols to foster an ethical and safe environment for the animals.” Several days of rehearsal apparently took place to ensure the dog was comfortable while performing the water scenes. But, clearly, that was not the case.

On the day of the shoot, ‪Hercules did not want to perform the stunt portrayed on the tape. So, according to the Amblin production team, they did not proceed with filming that shot. “Hercules is happy and healthy,” said the statement.

Where was American Humane while this was going on?

In a statement to CBC News, The American Humane Association said they put a safety representative on administrative leave after the video footage surfaced showing the handler forcibly attempting to put the dog in the water. American Humane monitors about 2,000 film and television productions annually, according to their Humane Hollywood Initiative website. Animal Safety Representatives award “No Animals Were Harmed” certification to films who meet their standards for on-set animal safety.

“American Humane has reviewed the video and we are disturbed and concerned by the footage,” the statement reads. “When the dog showed signs of resistance to jumping in the water, the scene should have been stopped,” said American Humane.

Meanwhile, producer Gavin Polone is angrily speaking up about this happening on his film set, considering his animal activism. “I’m horrified by this,” Polone told Deadline Hollywood. “The first thing I asked was, ‘Is the dog okay?’ He’s fine. But if I had seen that, I would have stopped it in a minute. People have to be held responsible for this. It was someone’s job to watch out for this kind of thing. Why didn’t they? This is something I’ve written about before, whether it be circus animals or animals on set. American Humane is supposed to be there supervising. That’s their job that someone is paid a lot of money to do. Why wasn’t this stopped? There needs to be a better system than this. That’s what I’ve called for in the past,” said Polone.

To all who saw the upsetting clip from the making of a dog’s purpose: I DID NOT SEE WHAT HAPPENED BEFORE CAMERAS ROLLED!

According to Polone, it’s curious that footage allegedly shot over a year ago would only now surface. The entertainment website TMZ recently released the video for the first time, just short of the film hitting theaters.

“Why not come forward with this immediately after it happened so that if people were doing wrong they could be stopped?” Polone said to CBC. “If you really look at the video very closely, it was edited for maximum effect, and the studio has more footage of everything in context and continuity that would probably paint a more benign picture,” Polone said, further adding he assumes whoever acquired the video sold it to TMZ.

Polone, who said he witnessed 70 percent of all scenes filmed, claims he never saw any animals in distress. But he still believes the dog in question was treated poorly and the case should be investigated.

PETA calls to boycott the film

Animal rights group PETA is condemning the treatment of the dog in the scene and calls for dog-lovers to boycott the film. The incident, PETA says, may be hard to watch, but comes as no surprise for those who have witnessed chronic neglect by Birds & Animals Unlimited (BAU) — the company that, according to a facility manager, supplied the dogs used in the film.

BAU has rented out animals to hundreds of other productions, including The Hangover, Marley and Me, Game of Thrones and Pirates of the Caribbean, according to PETA. And an eyewitness who worked at BAU documented chronic neglect for PETA, showing sick and injured animals who went without adequate veterinary care. Additionally, the animals are kept in filthy enclosures and denied food so that they would be hungry while trained to do tricks.

Watching Hercules, the German shepherd, almost drown sickens me. I am a strong believer that animals were not put on this earth for human amusement, entertainment or abuse. However, this video is clearly edited and could very well be two separate scenes — from two separate days, spliced together. In addition, like Polone, I find it suspect that this video would come to light just days before the movie premiers. TMZ most likely purchased the video, which means that the seller had no problem with exploiting the dog’s terrifying experience for financial gain. If the seller truly had the animal’s best intention in mind, then why not release the video in 2015?

That being said, the dog was clearly in distress. It should never have been forced to perform in an unstable environment. Precautions such as an escape ramp should have been put in place to protect the dog. But they weren’t — and now someone needs to be held accountable. That includes Birds & Animals Unlimited, the Amblin production team, American Human and even the person or group who sold the video for profit to TMZ. It should have been exposed in 2015, when the animals could have received immediate help.