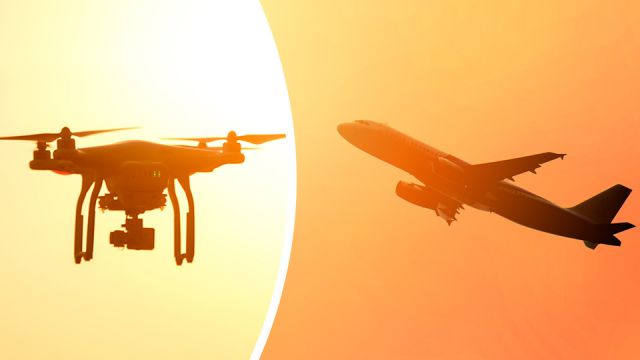 Aviation safety experts have been warning about the possibility of an airliner colliding with a drone for some time. On Sunday, Canadian officials confirmed that a six-passenger Skyjet was hit by a drone shortly before landing at Jean Lesage International Airport in Quebec City.

Drone collides with airliner in Canada

Thankfully, no one was injured and the craft landed safely. But as Canadian Transport Minister,  Marc Garneau explained in a statement, “I am extremely relieved that the aircraft only sustained minor damage and was able to land safely. It could have been much more serious. It’s important to note that aircraft are particularly vulnerable when on final approach coming in — the pilot is concentrating on landing properly.”

The incident happened 1,500 feet up in the air about three miles away from the airport. According to Canadian safety regulations, it is illegal to operate drones within 3.4 miles of an airport.

Pilots have expressed concern over these devices. A spokesperson for the Canadian Pilot’s Association had this to say about the mid-air collision: “There are a lot of drones flying, and there are a lot of people flying drones thinking they’re toys.” He went on to insist that it was only a matter of time before something like this happened and that that the risks of drones to commercial air travel were increasing.

In the United States, pilots have reported a marked spike in drone activity since 2014. As a result, the FAA has issued a stark warning by saying that “operating drones around airplanes and helicopters is dangerous and illegal.”

In September, a Black Hawk helicopter operating near Staten Island was hit by a drone, which damaged its rotors and one of the windows. Fortunately, no one was hurt.

Aviation experts weigh in: ‘Drones are mechanical geese from hell’

Despite the increase in drone activity, however, mid-air collisions with a plane have not happened until Sunday’s encounter, which is believed to be the first confirmed head-on hit in North America.

Aviation experts insist that drones pose a serious risk to aircraft. Dubai International Airport in Saudi Arabia has been forced to shut down because of drone activity and officials say the devices are a menace to firefighting aircrafts battling wildfires in California.

Some aeronautical engineers are describing the threat from drones as being akin to “mechanical geese from hell.” For instance, according to Javid Bayandor, an associate professor and director of the Crashworthiness for Aerospace Structures and Hybrids Lab at Virginia Tech, “Impacts from drones are not the same as [the] impact of birds. Birds can disintegrate relatively easily… you get something like a very viscous bulk of fluid on the other side. [But] a drone can be like a rock going through the engine.”

You can check out this simulation of what a drone strike might do to a plane engine below:

In fact, some experts believe that drone batteries could pose a catastrophic risk if they are chopped to smithereens by an airplane engine. More specifically, in such an event, they could burst into flames and ignite a fatal mid-air fire.

Will the FAA act?

Authorities are still wrestling with drone technology, which is proving very popular with the public. As the number of drone safety-related issues surge, the FAA is considering emergency measures that will address public safety concerns.