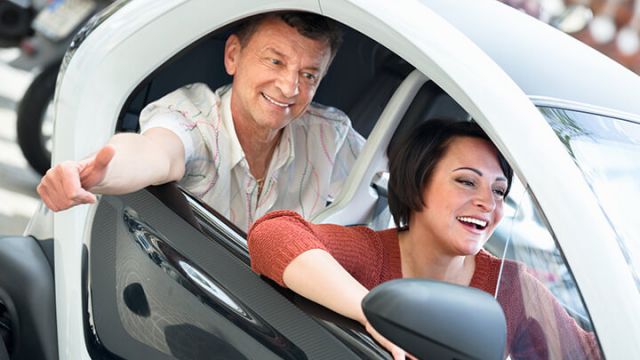 While putting together this article it became clear that there are many products on the market, or in development, aimed specifically at people who are looking to lower their carbon footprint. That says something pretty good about our society; people’s desire to be conscientious of their impact on the planet is increasingly influencing the market and motivating companies or entrepreneurs to develop innovative, low-impact products.

It is most likely your desire to reduce your impact on the planet that has led you to read this article as well. The options provided here should make it easier the next time you purchase a vehicle, bike or boat and want to make an environmentally friendly choice.

Here are seven different eco-friendly transit options you likely didn’t know about — perhaps there is one in here for you.

The Elf, an acronym for “electric, light and fun” is a two-seat hybrid between a bike and a car that uses pedals and a solar-assisted electric engine. Basically, this is similar to driving around in a Hot Wheels car, but you get to do so as a grown up!

Solar panels cover the roof of the vehicle, which provides power to a small electric engine that can assist the driver as often or as little as needed. Without the driver using the pedals, the Elf can travel 30 miles before needing to be recharged (which can take two to eight hours). With the driver pedaling, the battery life can be limitless. If you wish to never pedal at all, however, separate batteries can be purchased that can quadruple the time needed in between recharges.

The Elf can travel up to 30 m.p.h., and has room for two adults (or one adult and two neatly-arranged children). This sleek ride still counts as a bike, so you do not need a special license to get one.

Right now many of you are thinking, “Oh that looks so fun, but I could never see myself in one of those.” But think of what a great conversation starter this would be when everyone sees you rollin’ up in your solar-powered Hot Wheels. All of a sudden, you’ll be the really unique one in the bunch. The Elfs range in cost from $7,000 to $10,000.

The nice thing about bamboo is that it can be harvested without killing the plant, making it an easier resource to use sustainably than others. It can grow up to three feet in a single day and requires no herbicides or pesticides — all things that pandas figured out way before we did.

Turns out, bamboo is also the perfect material to build bikes out of. It is strong as steel and as light as aluminum, giving properly designed bamboo bikes an advantage over their aluminum-based cousins.

A couple of years ago, a forward-thinking entrepreneur gained worldwide attention for her design of bamboo bicycles in Ghana. The company began producing bamboo bicycles and donating to those who could not afford them in the local community. While other companies started making bamboo bicycles in other areas, several news outlets picked up her story, which gave some much-appreciated attention to this particular mode of transport.

Some people think that electric cars are a little ugly. While no objective truth regarding automobile aesthetics seems to exist, there have been some classic cars throughout history that many have decided were absolutely stunning. Let’s use the 1965 Ford Mustang as an example, or say the 1978 Volkswagen Beetle. Too bad those cars all require fossil fuels and contribute to climate change… only not the versions of those cars being produced by Duke’s Garage in Colorado!

The company, which specializes in vintage and classic cars, has developed a knack (and a niche) for restoring classic cars and turning them into classic electric cars. Now you can love cool cars and reduce your carbon footprint at the same time!

Part of lessening our impact on the planet is to be comfortable with having less. In the case of the Uno, this means having one less wheel. The Uno is basically a wheel that you ride on to and from your destination, though later models have added a couple more wheels (yet surprisingly kept the “Uno” name). Imagine riding an electric bike while constantly “popping a wheely,” and you have the Uno.

The Uno was developed by teenager Ben Gulak, who was inspired to create an eco-friendly small motor vehicle after visiting China, where smog epidemics are not helped by the mass use of small engine vehicles. All of the company’s products run on an electric motor, and they have also begun creating all terrain scooters for those that want to take their eco-friendly transportation methods to an X Games-like environment.

At first glance, the Geely McCar is an ordinary mini-vehicle — nothing special, although consumers have the choice of purchasing a full-electric or hybrid-electric version. On further inspection, however, the Geely McCar takes a very bold approach to urban traffic congestion. Open up the trunk of the McCar and out pops a handy electric scooter! It’s like the car “births” a scooter.

The idea behind the McCar is that drivers can drive long distances until they hit an urban area where it is ideal to use the electric scooter instead. The McCar was released in 2011 but has yet to really catch on, possibly because the public feels it was produced by the McDonalds restaurant chain.

The Twizy is basically a smart car and electric vehicle combined. It is very popular in Europe where over 15,000 units have been sold. Unlike the Elf, the Twizy is a full car, smartly designed so that commuters can transport belongings and even bicycles on the back. It is what you would imagine golf carts to look like in the year 2090.

Often when people first decide they want to be more environmentally friendly, the first thing they do is look at how much they drive. For those that frequently travel by water, however, it’s just as valuable to take a look at more sustainable boating methods.

The two main forms of environmentally friendly boats are wind-powered (often referred to as “sailing”) or those that are powered manually (rowboats, canoes, Viking longships). For motorized boating, however, a popular new trend developing is solar boats. Boats are great places to put up solar panels and harness the energy of the sun. For yachts and speedboats, electric versions are becoming just as popular as they are for land-based cars.

Are there any other options out there that we missed? Let us know!