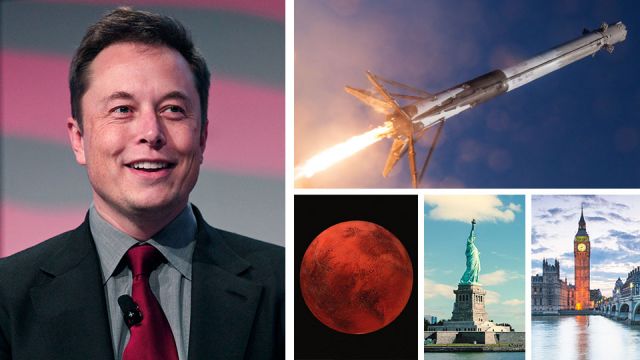 Elon Musk, the brash CEO of SpaceX, has never shy about making bold predictions. This Friday, at a space industry conference held in Adelaide, Australia, the eccentric billionaire unveiled some of his most ambitious plans yet. They include:

Elon Musk founded SpaceX in 2002 with the goal of making humans an interplanetary species. Some of his most ambitious aims, which have included plans for a gargantuan spaceship that most critics insisted were totally unrealistic, have been scaled back in recent years.

But there is little doubt that Musk’s private aerospace company has managed to change the trajectory of the entire industry. His firm has been awarded about $4 billion in contracts from NASA and it is responsible for shuttling cargo to and from the international space station. In 2018, SpaceX is expected to fly astronauts to and from there as well.

Currently, SpaceX has gotten very good at landing its current generation of spacecraft (called the Falcon 9) on both land and sea. But at the International Aeronautical Congress, Musk talked about a new type of re-launchable vehicle, which he’s calling Big F**king Rocket (or BRF for short). He foresees these crafts as blasting off from water-docked launchpads as they ferry commuters briefly into orbit before the vehicles re-enter the earth’s atmosphere and touch down in a distant city.

According to Musk, these commuter rocketships will hurtle from city to city at an astounding 18,000 miles per hour. You can check out a video representing the form of travel Musk envisions below:

No doubt, the team that created the SpaceX video depicting what commuting may look like in the future have made it look way cool. But before you book your seat, you may want to check out this video involving some rather infamous SpaceX mishaps:

Back to the moon

Musk also outlined plans to return humans to the moon. In July, the SpaceX CEO said his company was determined to fly two civilians into a lunar orbit before the end of 2018. At that time, he also reiterated his commitment to building a lunar base.

As Musk explained, “If you want to get the public really fired up, I think we’ve got to have a base on the moon. That’d be pretty cool. And then going beyond there and getting people to Mars. That’s the continuance of the dream of Apollo that I think people are really looking for.”

At Friday’s conference, Musk made it clear that Mars was his ultimate objective. His goal of launching a cargo mission just five years from now (and a manned mission by 2024) struck many observers as optimistic, to say the least. After all, the Red Planet is 35 million miles away (at its closest) and experts insist that enormous technological hurdles have yet to be worked out.

Nevertheless, on Thursday, Lockheed Martin — a SpaceX rival —– unveiled a plan for a huge space laboratory, which would orbit Mars.

In this video, you can check out Elon Musk’s vision of what a mission to Mars will look like:

Musk’s optimistic projections came as the space race is heating up. Russia and China have both signaled that they are planning lunar missions in the near future. Meanwhile, other notable entrepreneurs (like Jeff Bezos) are trying to blaze new trails in the industry too.

Musk’s timeline for a Mars mission is about one decade ahead of NASA’s. As you might expect, reaction to the SpaceX CEO vision has generated a range of reactions on social media. Here’s a sampling of what people are saying:

More power to #SpaceX & breaking up the US aerospace monopoly, but they’ve yet to even send human into space https://t.co/Bk0PB6z0wF

Hey @elonmusk will weed be legal on Mars?

Would you book a flight on one of Musk’s BFRs? I’d love to hear your thoughts. Let me know in the comments section below.