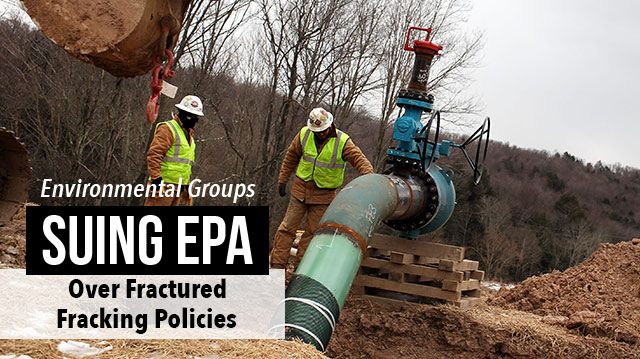 Last week, the National Resources Defense Council (NRDC), along with several other environmental groups, filed a lawsuit against the US Environmental Protection Agency (EPA) for failing to develop federal regulations regarding the disposal of wastewater from hydraulic fracturing operations (fracking).

Currently there are almost no regulations whatsoever governing how a company disposes of wastewater from fracking operations: they can inject it into the ground (the least costly disposal method); they can spray it over roads or land; and they can even just dump it into landfills, where the rest of the country’s garbage goes. The reason for this is that despite containing benzene, mercury, and radioactive material, wastewater from fracking is not considered a hazardous material under the Resource Conservation and Recovery Act (RCRA), and as such is generally outside the scope of federal regulations, leaving states to develop their own individual rules and sets of standards.

The EPA itself concluded in 1988 that changes needed to be made to federal regulations and state guidelines regarding the disposal of wastewater from oil and gas operations. However, nearly 30 years later, no changes have been made. Furthermore, the EPA is required to review and update their regulations every three years, yet no review has taken place since the one from 1988 that recommended changes.

Hydraulic fracturing, often referred to as fracking, is the process of injecting chemically treated water into the ground in order to cause cracks in the rock formations below. These cracks, or fractures, allow natural gas, which had previously been thought to be unrecoverable, to flow and be collected.

The impact of this process on the environment and health of nearby communities has public health advocates and environmentalists alarmed. The wastewater from fracking contains known carcinogens and has the potential to contaminate nearby water systems. Fracking has also been linked with increased seismic activity and earthquakes. Oklahoma has seen a dramatic increase in seismic activity after the spread of fracking operations throughout the state, and has experienced as many earthquakes in the last two years as it historically would over the course of 1,000 years.

With individual states free to set their own standards and regulations regarding the disposal of wastewater, oil and gas companies are able to “value shop” from state to state in order to search for the best deal, i.e., the states with the most lenient regulations.

Updated federal regulations and state guidelines would create a more even playing field between states and prevent “value shopping” or states lowering their regulations in order to compete with their neighbors.

The NRDC’s proud tradition of suing the EPA

In just the last two years, the NRDC has filed lawsuits against the EPA for the following:

These lawsuits have led to numerous out-of-court settlements between the NRDC and the EPA involving stricter environmental regulations.

Examples include the following:

Is it possible that the outcome of this lawsuit will be an out-of-court settlement that involves the EPA updating its wastewater disposal regulations and state guidelines? Could it perhaps result in wastewater from fracking being listed as a hazardous chemical and thus included in the RCRA? History tells us that this is a very distinct possibility.

The amount of litigation and resulting settlements that go on between the advocacy group and federal agency has led critics of environmental regulation to claim the two sides are colluding with one another. In fact, in 2012 there was even talk of introducing legislation to limit these types of sue-and-settle agreements. The problem with these accusations is that nothing the two organizations are doing resembles collusion.

EPA regulations often need to be updated to comply with federal laws, such as the Clean Air Act and the Clean Water Act. When the EPA drags its feet a little in making these changes (either due to political or legal obstacles), groups such as the NRDC will often file lawsuits to force their hand and speed up the process. That’s it, that’s all there is to these lawsuits.

If critics contend that some at the EPA are secretly pleased that a lawsuit will result in stricter environmental regulations, it hardly amounts to collusion — in fact, it would be alarming if that weren’t the case.

The end result in this lawsuit might very well be the placement of fracking under federal jurisdiction and subject to stricter regulations, and that is a good thing for people and the planet, no matter how it is we get there.

If you want to see stricter guidelines around fracking so that our health and the health of our planet is protected, please contact your federal representative and let them know this is an issue you care about.