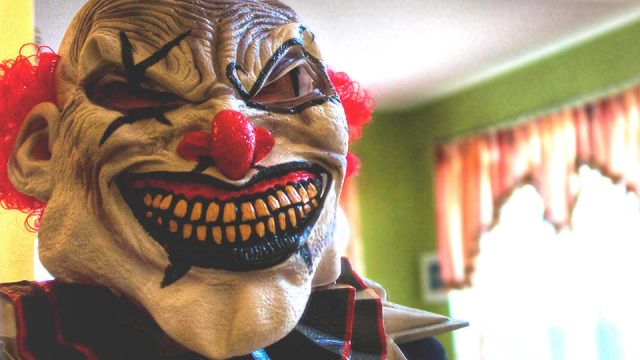 Clowns can invoke laughter or inspire dread. These pranksters usually poke fun at themselves but some people find them quite creepy. In the last couple of years, allegedly sinister clown incidents have been scaring parents and making news across the country. The number of weird scenarios include:

Many of these strange episodes (upon closer inspection) have turned out to hoaxes. A majority of them have been unsubstantiated. However, clown hysteria has recently reached such a fever pitch that police departments across the country frequently warned people that there could be severe consequences for anyone trying to incite panic by donning a clown costume.

Not everyone got the message. Recently an Ohio man was arrested and charged with inducing a panic after he chased his six-year-old daughter while wearing a clown mask.

The incident occurred in Boardman Township, which is a suburb of Youngstown, Ohio. According to the police report, Vernon Barrett Jr., 25, put on a clown mask in what is being described as a prankish effort to punish his daughter for misbehaving.

The episode may have begun as a silly stunt to encourage better behavior, but it quickly got out of hand. In fact, the young girl was so terrified that she fled to a nearby car and told the driver (an unidentified woman) that she was being pursued by a scary clown. The father, who was still wearing the clown mask, then appeared and tried to pull his petrified daughter out of the car.

The unidentified woman in the car quickly dialed 911, telling authorities that the incident “scared the bejeezus out of me.” Before police could arrive, however, the girl fled to a nearby neighbor’s apartment. Once there, she told a neighbor, Dion Santiago, 48, about the sinister clown who was chasing her.

Mr. Santiago, obviously concerned, peeked out his apartment window and saw a man with a clown mask on. He then grabbed a gun and fired a warning shot out of his window. By the time police arrived, they found Santiago and Barrett (who was still wearing a clown mask) arguing heatedly.

Barrett, the girl’s father, was arrested for child endangerment and inducing a panic, but Santiago was also booked for discharging his weapon while intoxicated. Both men are scheduled to appear in court as early as Tuesday.

According to the official police report, “Barrett said that he decided to use the clown mask into scaring her to behave” because traditional disciplining methods had failed. Sadly, this is not the first time the six-year-old girl has been mistreated — the girl’s mother is currently in prison for child endangerment after she stepped on her and broke several of her ribs in the process.

Is frightening kids an appropriate way to punish children?

As you might expect, the bizarre incident has prompted many childcare experts to speak out against the tactic of trying to scare children into good behavior. Carley Anne Tsaglos, a clinical social worker, says that scare tactics rarely engender disciple.

As she explains, “My biggest question would be why would a parent want to use fear to discipline a child? This may signify to me that the parent may feel powerless themselves, needing to make others feel weaker by utilizing fear to create their own sense of power and security.”

Tsaglos adds, “There are many effective means of discipline and fear does not seem to be one of them. Fear creates anxiety, stress and a host of other nonproductive emotions. It will encourage kids to go to great lengths to hide misbehavior or errors, in fear of the severe repercussions. In this case, the fear creates a need to conceal, rather than effectively learn proper behavior, problem-solving or the understanding consequences. On the other hand, effective discipline builds self-esteem, sets a good example for life to follow, as well as allowing children to feel safe and secure in their homes and within themselves.”

Suzanne Dworak-Peck of the School of Social Work at the University of Southern California explains:

“Parents are often not skilled in appropriately managing children’s behaviors, which can lend to choices that are counterproductive (as in this case). There is a strong research support that shows that incentivizing good behavior and actively ignoring poor behaviors in children (so that children are given positive attention when they are making positive choices) results in consistently better behavioral outcomes among children.”

Dr. Julie A. Cederbaum, an associate professor at the University of Southern California, also adds that an extensive body of literature exists showing that “fear-based parenting and punishment can have long-term consequences on the emotional health of the child, including low self-worth and self-esteem and lack of basic trust in adults.”

She concludes by noting that, “In this case, the choice to frighten his child as a form of discipline could be classified as a traumatic event. Reactions to a trauma experience like this one could include regressive reactions (i.e. bedwetting), physiological reactions (i.e. loss of appetite) or emotional behavioral reaction (i.e. anxiety).”

Clownish efforts were no laughing matter

Clowns are related to the trickster figures in mythology. That is, they have always been ambivalent characters — both scary and humorous. However, in this instance, a father’s clownish efforts to discipline his daughter by scaring her proved to be no laughing matter.