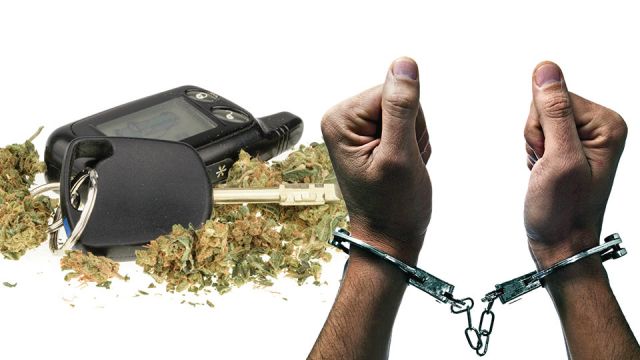 In recent years, some states have decriminalized the possession of small amounts of marijuana for recreational use. Still others have passed laws that allow limited use of medical marijuana. So, how do these cannabis laws come into play when you’re driving while high?

If you assume that driving under the influence of marijuana is legal in a “legalized” state or country — you’d be wrong. Get to know the laws and, more importantly, understand how weed affects your ability to drive.

According to state marijuana laws as of 2017, 26 states and the District of Columbia currently have laws in place legalizing marijuana in some form. Three more states will soon join them after recently passing measures permitting the use of medical marijuana. Meanwhile, Canada has also legalized marijuana in some forms. So, what are the legalities surrounding a marijuana-related DUI (driving under the influence) compared to an alcohol-related DUI?

When it comes to an alcohol-related DUI, measuring BAC (blood alcohol concentration) determines the level of intoxication. A BAC measurement that exceeds the legal limit determines the criminal offense, even without impairment. And, just like drunk driving, driving under the influence of drugs is a crime. That includes an impairment due to prescribed drugs. But the law begins to get tricky when it comes to weed.

Alcohol is water-soluble, while cannabis is fat-soluble. Alcohol remains in your body until it’s flushed out. Cannabis, however, is stored in fat cells. That means even after it has stopped giving you that psychoactive high, it remains in your body. What’s more, if you use marijuana regularly, you’ll have a higher residual level of marijuana metabolites, compounds that remain in fat cells long after the body has broken down active cannabinoids. This creates a slippery slope when it comes to marijuana DUI charges.

Earlier this year, the Summit Daily reported that a Colorado man charged with a marijuana DUI insisted to a jury that he was not driving while impaired by the drug. It took the jury less than one hour and a half to acquit him. In fact, not only did the jury side with Steven Hogg, they also threw out traffic infractions added prior to the trial.

With an alcohol-related DUI, there’s a hard rule for anyone exceeding the BAC of 0.08. But when it comes to weed, the fact that it remains in your body long after you’re no longer high has some juries siding with drivers who exceed five ng/ml for cannabis.

But, while driving high on marijuana may be difficult to enforce and prosecute, it doesn’t mean you can’t still be tested and then charged for a DUI. There’s also no guarantee that a judge or jury will see things your way.

In the U.S., every state and the District of Columbia has laws that specifically target drug-impaired driving. Apart from the general impairment laws, there are generally two laws that states use.

Colorado and Washington have established an intoxication blood level of five parts per billion. But there’s still no roadside test for THC. Some states are experimenting with a saliva test. Other states are waiting for research that better-defines THC and impairment before moving forward with testing.

Just because weed is legalized in Canada, don’t assume you can cross the border and drive high. Like American laws, driving while high has big consequences. According to Canada’s Department of Justice, the Criminal Code currently prohibits driving while impaired by any drug. Police officers can conduct standardized field sobriety tests if they believe you have a drug in your body. Canadian police use a standard sobriety test that includes looking at a driver’s eyes and asking the person to walk, turn and stand on one leg.

Recently, Global News reported that police across Canada have been testing saliva-based roadside devices on suspected drug-impaired drivers. Police using roadside devices swab the tongue for saliva with an instrument that looks like a tongue depressor. Two other devices, developed in Canada, detect THC by driver’s breath, similar to a breathalyzer. But neither device has been tested yet by the police.

If you are suspected of being impaired by a drug, you could be transported to a hospital for a drug test, overseen by a doctor. Driving under the influence may cost you a fine of $1,000 for a first offense to 120 days in jail on a third or subsequent offense. And if driving under the influence results in a death, that could mean life imprisonment.

Here’s what driving high does to your reaction time

THC affects the part of your brain that controls body movement, balance and coordination. It’s also known to impair judgment and memory. In fact, according to the National Council on Alcoholism and Drug Dependence, research conducted through simulated driving studies found that driving while under the influence of marijuana negatively affects attentiveness, perception of time and speed.

What’s more, your ability to draw from past driving experience is compromised. So, no matter how many times you successfully maneuvered through a skid in the past, when you’re high on weed and your car begins to skid, you won’t remember how to control the vehicle.

Interestingly though, occasional marijuana users (rather than regular users) have a harder time behind the wheel when they’re high. Experts believe this happens because regularly using marijuana increases tolerance and an ability to compensate for driving high.

Remember, if you’re driving while high, most law enforcement agencies have a drug evaluation and classification program in place. Today, officers are trained to recognize signs of driving high, including bloodshot eyes and increased nervousness. If an officer believes you’re impaired, they can measure the level of THC in your body by collecting blood, urine or oral fluid. And, if you’re over the limit, that could spell DUI.