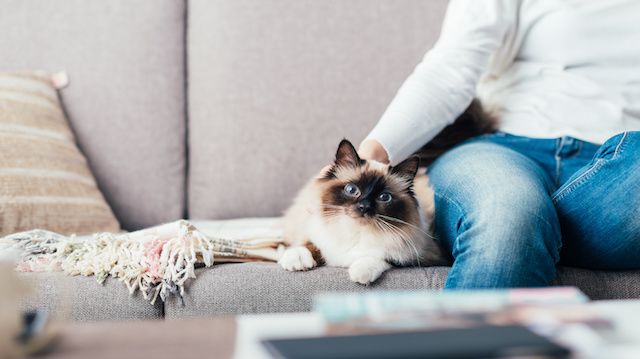 People diagnosed with HIV (human immunodeficiency virus) can now lead long, healthy lives with proper treatment. The same holds true for cats diagnosed with feline immunodeficiency virus (FIV), although many aren’t given that chance. Many animal shelters routinely euthanize FIV-positive cats. Part of the reason is the slight risk of infecting other felines, but it’s primarily because few people want to adopt cats with FIV, even if the animal is asymptomatic. They also can’t attend popular adoption fairs held at pet stores and similar venues, so it’s harder to introduce such cats to the public.

A New Jersey non-profit animal rescue is trying to remove the FIV-cat stigma. The Byram Animal Rescue Kindness Squad, known as BARKS, is trying to encourage FIV-cat adoption and provides information about living with FIV-positive felines.

Identified in 1986, FIV is a retrovirus, as is HIV. It causes an immune deficiency that lessens the body’s ability to fight off the common bacteria, fungi and protozoa that a healthy cat can easily conquer. It is the secondary infections that claim the lives of cats with FIV, not the virus itself.

Cornell University College of Veterinary Medicine estimates that up to three percent of otherwise healthy cats in the United States are FIV positive. The virus is diagnosed by blood testing. FIV is a fragile virus and doesn’t live long outside of the cat’s body.

Since the virus is concentrated in feline saliva, FIV transmission generally occurs via a deep bite wound from an infected cat. That’s one reason why the majority of FIV-positive cats are intact males allowed to roam. These tom cats fight with other males over females and territory. Cats sharing food and water bowls, toys and litter boxes won’t pick up FIV from infected cats. Even mutual grooming won’t cause FIV transmission. As long as the cats don’t get into a nasty fight, there is little danger of an FIV-positive cat transmitting the virus.

People often confuse FIV with FeLV — the feline leukemia virus — which is easily transmitted through grooming, eating out of the same bowls and the like. Cats can’t transmit FIV to people, dogs or other animals.

A vaccine against FIV is available, but it is not 100 percent effective. There’s also another issue: A cat vaccinated against FIV will produce antibodies against the virus indistinguishable from infected felines. If you have FIV-negative cats in your household and want to add an FIV-positive member, discuss vaccinating your FIV-negative cats with your vet. If you decide to go ahead with the vaccine, your vet should implant a microchip in your cat, and that chip’s database should include the FIV vaccination information. If your FIV-positive cat is a mellow guy who minds his own business, your vet may not recommend vaccinating other cats in the household.

Cats with FIV must be spayed or neutered. A neutered male cat usually loses the aggressive behavior toward other felines common in the tom cat. Cats with FIV should never go outdoors.  Other basics of FIV cat care include:

Take your cat to the vet at the first sign of any illness. Prompt treatment makes a difference, as cats may otherwise succumb to infections and diseases that their compromised immune systems can’t fight off.

Taking on an FIV-positive cat offers some challenges. But it can also offer huge rewards in the form of a loving animal who otherwise would have no chance of a life — let alone love — at all.