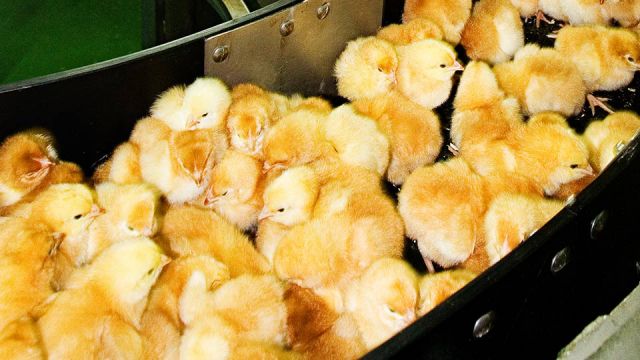 Many people have already seen the gruesome videos of live male chicks being ground up — and those who haven’t may not want to. But after watching the video here at Alternative Daily, we felt that we needed to go beyond the disgusting footage to find out just how much this sort of thing happens in the US, and why.

The horrifying truth of the egg industry. #GoVegan pic.twitter.com/Qrhew6cJMD

How common is chick grinding in America?

According to Humane Facts, more than 260 million male chicks are killed each year in the U.S. by suffocation, gassing (carbon dioxide or argon), maceration (fully conscious chicks are inserted into high-speed grinders) or electrocution (a high-speed vacuum sucks chicks through a series of pipes to an electrified kill plate). The last one is the most common.

“Destroying unwanted male chicks is a worldwide, traditional farming practice,” Karen Davis, of United Poultry Concerns, told The Alternative Daily. She said that even organic or local farms would have their own individual practices. “Generally, no farmer keeps farm animals (other than a token animal or special pet) simply for pleasure and companionship. If they can’t sell them or eat or drink them, they destroy them or let them die,” she said.

Why do companies do it?

Commercial producers argue that the male chicks aren’t commercially viable (i.e., profitable). That is, the male chicks can’t lay eggs or grow big enough to be used for meat. According to the Happy Egg company, which claims to raise truly free-range chickens, “Unfortunately there is currently no method to breed female-only chicks.”

And male chicks aren’t the only victims of the egg production process: hens are typically slaughtered at 18 months to two years of age, when their egg laying rates start to decline, even though their typical lifespan is 15 years.

A pledge to end the culling of male chicks by 2020

United Egg Producers, which represents 95 percent of all eggs produced in the U.S., agreed to stop the practice of male chick culling by 2020 “or as soon as it is commercial available and economically feasible, replacing the practice with in-ovo egg sexing technology.” This technology, developed by German scientists, would determine the sex of each egg before the chick inside develops.

How does the technology work? Well, nine days into the three-week incubation period, a machine makes a tiny hole in the egg and extracts a small amount of fluid. A quick genetic analysis determines the sex of the embryo. The male eggs could then be used for other things, like pet food, instead of being culled once the male is born. Currently, the ground up or gassed chicks are sometimes used for zoo food, but mostly the remains are burned or used for fertilizer.

A university in the Belgian city of Leuven has also developed a technology that doesn’t even involve piercing the egg. Instead, it depends on light rays that illuminate the eggs and shows which ones are male, since male and female chicks are different colors. The catch here is that it only works on brown eggs.

However, both these methods cost time and money, and industrial farmers are unlikely to adopt them without widespread pressure, despite their promises. On the other hand, the work of separating chicks by sex is currently done manually by chicken sexers, who have to sort 1,000 chickens an hour, sending the male ones down the chute. They do this either by judging by the feather color (chickens are specially bred so that is possible) or by squeezing the poo out of the chick and taking a look inside their intestines for their sex organs. In the U.S., this position only pays $16,000 to $28,000.

I contacted the top five egg producers in the U.S. (Cal-Maine Foods, Rose Acre Farms, Michael Foods, Hillandale Farms, Trillium Farm Holdings) and asked them if they would adopt this technology. To give you an idea, Cal-Maine Foods has 36.4 million egg-laying hens and sales of $1.9 billion last year. Despite emailing and calling, none of the five companies responded.

How to buy from brands that don’t cull chicks

The short answer: it is practically impossible to buy eggs that haven’t been part of a male-chick killing process.

To start off with, don’t be fooled by labels like free-range, or “humane” — these labels are not regulated by the USDA and don’t have strict definitions. Free-range, for example, is only regulated for chicks and turkeys, but not for cows or pigs. And all it means is that chickens have “access” to outdoors, be that very tiny, cramped and caged access.

“Cage-free” only means the chickens are not in cages. Once here, they are typically crowded into windowless sheds, with thousands of birds on the floor and little room to move. The term doesn’t imply anything about the culling of male chicks. As for “humanely raised,” any producer can slap that term on a product, and it includes animals killed for meat without painkillers.

Even the term “certified organic” only guarantees that animals are raised without hormones and antibiotics; it does not prohibit de-beaking — a painful procedure where part of the bird’s beak is seared off to prevent it pecking other birds out of boredom or stress, and thereby ruining other birds for meat use. It also does not prohibit rough handling, severe confinement and mutilations.

Typically, even real free-range companies kill their male chicks. For example, The Happy Egg Company claims its eggs are “true free-range,” with each chicken having at least 14 square feet of land, and access to perching towers, sand pits, pecking toys and nest boxes. We tried to contact the company and received no response, but we found these statements (here and here), where the company admits that its hatcheries also slaughter male chicks, using “pain-free” argon gas.

Get eggs from sanctuaries or local farms

Most animal-rights organizations recommend going vegan in order to reduce greenhouse gas emissions and other contamination, improve global food security and avoid animal cruelty at all the different stages of the process. However, for a range of reasons, if this isn’t an option for you, often the best alternative for buying your eggs is a neighbor with a few hens (or raise your own).

If that isn’t possible, some animal sanctuaries will give away or sell the eggs their animals lay. Places like Hen Heaven look after rescued hens and promise to never kill male chicks. They also promise never to kill hens for reaching old age or if they stop laying eggs.

These places seem to be more common in the UK than America. The Peaceful Prairie and for rescued farm animals in Colorado and Piedmont Farm Animal Refuge prefer not to give their eggs away, instead letting the hens eat them, which is great for their health. The Rooster Sanctuary in Colorado also feeds any eggs to its hens and roosters (see the video below).

You can also make inquiries in your area about local, small-scale farms, or try this directory of 1,400 pasture-based farms in the U.S. Local Harvest lists thousands of Community Supported Agriculture projects, where locals can buy seasonal food straight from the farmer. We recommend calling your closest farm first to find out about their particular practices.

After reading all of this, if you do want to pass on eggs, there are a range of easy substitutes available. I’ve made many sweet and delicious pancakes using mushy bananas instead of eggs. A teaspoon of baking soda with one teaspoon of vinegar gives cakes and bread a rising or lightening effect, and a 1/4 cup of unsweetened applesauce can replace an egg in moist baked goods like brownies!