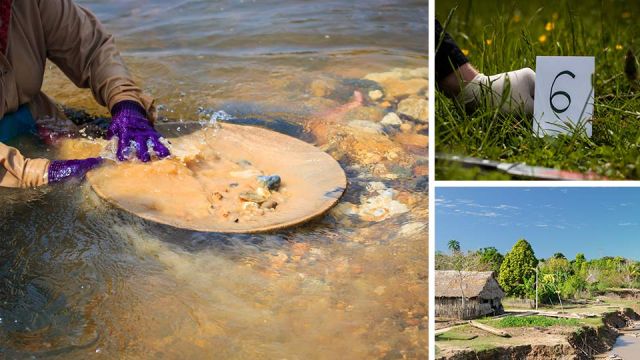 Deep in the Amazon, a group of uncontacted, categorized Indigenous tribespeople were foraging for food along a river bank. Then they ran into miners.

There was a confrontation of some kind, then violence. However it started, the end was horrific. The miners hacked as many as 10 of the tribe members to pieces. What was left of their bodies was dumped in the river.

That’s the story the miners told in the bar of a nearby frontier town. One even carried a hand-carved paddle, which he claimed was a souvenir from the fight. “It was crude bar talk,” said Leila Silvia Burger Sotto-Maior, a coordinator from Brazil’s agency on indigenous affairs, Funai. The agency is the primary government body tasked with overseeing the welfare of nearly a million indigenous Brazilians. “They even bragged about cutting up the bodies and throwing them in the river,” she told The New York Times.

The case has already sparked outrage in Brazil, where indigenous rights campaigners say the government is paving the way for a genocide of indigenous peoples. Sotto-Maior said the miners claimed “they had to kill them or be killed,” but Brazilian authorities are investigating the incident, which is suspected to have taken place in the vast Javari Valley. “We are following up, but the territories are big and access is limited,” prosecutor Pablo Luz de Beltrand said.

Located in the extreme west of the Brazilian Amazon, it can take nearly two weeks just to reach the Javari Valley. Once there, investigators will have to search a region of thick jungle that’s bigger than the country of Austria. Yet while Austria has a population of nearly nine million, Javari is home to an estimated 3,000 indigenous people — many of whom belong to tribes that have never encountered the outside world. “These tribes are uncontacted — even Funai has only sporadic information about them. So it’s difficult work that requires all government departments working together,” Beltrand explained.

For Beltrand, this is already the second suspected case of indigenous killings this year, but campaigners say more deaths could be inevitable. They blame the government’s cuts to Funai, arguing indigenous people could now be defenseless in the face of an industry eager to exploit the natural resources of their ancestral lands. “More attacks and killings are likely to happen,” said Paulo Marubo, an indigenous leader from western Brazil. “The cuts to Funai’s funding are harming the lives of indigenous people, especially uncontacted tribes, who are the most vulnerable,” said Marubo.

Survival International, a global indigenous rights group, has gone further, warning that President Michel Temer already has blood on his hands. “If these reports are confirmed, President Temer and his government bear a heavy responsibility for this genocidal attack,” Survival’s Director Stephen Corry said, arguing funding cuts to indigenous defenders could have deadly consequences.

Under the business-friendly Temer administration, Funai’s funding has been almost halved, with insiders claiming the agency has barely enough funds to cover salaries, let alone launch new investigations into human rights abuses. Meanwhile, a congressional group of pro-farming legislators has pushed to defang the agency, and press charges against some of its more fervent indigenous rights defenders. “Without doubt, this is one of the worst crises for the rights of the indigenous people,” one anonymous Funai official told The Guardian earlier this year.

However, advocates of the cuts argue Temer is simply fulfilling a mandate. In 2016, Temer took office vowing to crack down on corruption and reign in public spending. Since then, he himself has been accused of corruption, while deep spending cuts have sparked some of Brazil’s largest protests in a generation. All the while, land activists say corporate lobbyists have gone on the offensive under Temer, pushing for more concessions from indigenous lands.

In April, legislators sought to open much of the Rio Pardo indigenous territory up to the logging industry and farmers. The territory is home to the Kawahiva, an endangered tribe that experts say could already be teetering on the edge of extinction. Survival International has described the proposal to open Kawahiva lands to industry as tantamount to genocide.

“Uncontacted peoples, like the Kawahiva, clearly want to be left alone and to live as they please,” said Corry. “But Brazil’s current leaders are holding closed-door meetings with corrupt politicians, and kowtowing to the agribusiness lobby, expressly to deny them that right. The stakes could not be higher — entire peoples are facing genocide as a result of this callous approach,” he warned.

Campaigners say mining can be disastrous for indigenous peoples, bringing health problems, substance abuse and unheard-of diseases to isolated indigenous communities. Survival International has pointed to the case of the Yanomami, whose lands have become a magnet for illegal miners.

A 2016 study found 90 percent of Yanomami and other indigenous people in one area suffered high levels of mercury contamination. At high levels, mercury can cause severe neurological problems, paralysis and eventually death. Researchers suggested the indigenous people likely became contaminated by run-off from illegal gold mines.

“The metal then enters the food chain via the river water which the Yanomami drink, and the fish on which they rely as a key part of their diet,” Survival International stated.
Campaigners say a similar fate is now looming over the indigenous people of the Renca reserve. Earlier this year, Temer abolished the reserve, which is the size of Denmark and home to the Aparai, Wayana and Wajapi tribes.

At the time of writing, Temer’s decision to open the area to commercial mining was in limbo, after being suspended by a federal court. However, the government says it is continuing its legal battle to open the reserve, which is believed to contain large reserves of manganese, iron, gold and copper. Wajapi spokesperson Jawaruwa has warned mining could devastate the local environment and indigenous people.“This won’t bring development for us. It will only bring catastrophe,” he said.