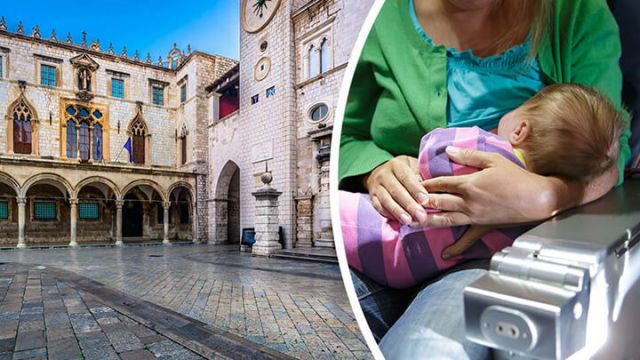 On July 27, 2017, I gave birth to my first child. At 30, my partner and I hadn’t planned on starting a family for at least a few years, but we decided to go with the flow and see what this parenting thing is all about.

Needless to say, we were instantly in love with our little girl Isla. Neither of us were baby people, but we were quickly won over by her ridiculously cute little face, toes, nose, ears, hands… essentially everything was cute!

Having planned for an at-home, natural birth, things didn’t exactly play out as planned — Isla came into the world at the end of a painful and arduous emergency C-section. I spend almost a week in hospital then we headed homewards and I began the slow process of healing.

The problem was, four months earlier we’d committed to attending a wedding in the UK, then traveling through Greece and Croatia with Will’s extended family for five weeks. We’d already had long discussions about how having a baby wasn’t going to tie us down in any way, and at that time the concept of traveling overseas with a baby seemed a little daunting but definitely achievable — and an excellent way to prove a point!

But now, with a tiny six-week-old baby and a body that had a long way to go before it was fully healed, we were faced with the harsh reality: we weren’t prepared for a trip to Europe with a newborn.

Having dropped thousands on flights, transfers and accommodation, however, we were loathe to squander all that money and admit defeat. What’s more, it was Will’s brother getting married, an opportunity that comes along (hopefully!) only once.

The problem was, Isla hadn’t been putting on much weight over the past couple of weeks, she’d had a tongue tie snip just a week before, and I couldn’t carry anything other than my baby — anything heavier could risk tearing my sutures. We were utterly sleep deprived, exhausted and concerned about the fact that we were leaving the impressive state-funded midwife behind in New Zealand. We would be traveling into murky waters alone.

And yet, here I am three weeks later, sitting in an apartment overlooking the Dubrovnik old town, Isla wriggling happily beside me… and I’m still very much alive. We are living proof that you can definitely travel through Europe (or anywhere else, for that matter), with a newborn baby. Here’s how we did, and how you can too!

1. Don’t listen to anyone else

One of the biggest barriers to our impending Eurotrip with a newborn was the opinions of friends and family. Obviously, I love these people to bits, but I’ve found that when it comes to babies, they generally have an overly negative, fear-based view of the world.

So when we announced that we still planned to go ahead with our Eurotrip even with the complications of birth mere weeks behind us, I was very much unsurprised to receive a flood of cautions and eyebrow-raising. Family members sagely advised us to “throw in the towel” and forget about the money we’d already spent, saying that I needed more time to heal and that Isla was too young to go galavanting about the world.

Friends involuntarily looked over at their own little ones and shook their heads, stating that they have enough trouble simply going into town to buy food or hit up a cafe… how the heck were we going to fly, train, bus, ferry and walk around Europe with a six-week-old baby?

And it was hard, because those were the exact thoughts we’d been having. But we stuck to our guns, smiled politely and “accepted” whatever advice people had to give, and ignored every bit of it. Your life is what you make it, and if you went around subscribing to the warnings and negative thoughts people projected on you, you’d literally never even get out of bed in the morning. We’d decided to go traveling with our fresh baby, and nothing was going to stop us. To make your travel plans happen, you’ll need to adopt a similarly determined mindset.

The hard truth is that we’re not baby people. Will had never even held a baby before Isla came into the world, and I’d had no real desire to interact with other people’s babies up until this point. So all we had to go on for our notions of traveling with a baby were glimpses we’d snatched in airports during our own (baby-less) travels, along with blogs.

Both our own observations and the blogs suggested that we needed a small arsenal of baby things on our trip: bags overflowing with diapers, wipes, clothing changes and other baby-related paraphernalia. Strollers loaded with supplies. Car seats, portable cots, sunshades. That kind of thing. Apparently, to travel with a baby, you basically had to bring your house with you.

How wrong we were. Babies, especially newborns, really don’t need much. Milk: check. A few changes of clothes: check. A portable carrier: check. And a place to sleep: check. The rest doesn’t really matter!

We brought a lot of things for Isla on our trip, but we’ve probably only used a third of them. If I did it again, I’d cut out most of her clothes; she only needs changing once every couple of days, unless she has a rare poop blowout. I also wouldn’t bring her stroller at all — the cobbled and paved streets of Europe aren’t stroller-friendly, and besides she doesn’t even like being in there. And as much as it pains me to admit, I wouldn’t even bring the reusable cloth diapers. Finding ways to wash and dry them just adds another element of work to your trip that you really don’t need, and they take up a whole lot of space.

So before you begin packing your baby’s odds and sods, keep it simple. Real simple.

3. Set yourself up for easy feeding

The single biggest challenge you’ll face during your travels is keeping your bub fed. Whether you’re breastfeeding or bottle feeding, be sure to strategize how to most efficiently and easily feed your little tyke on the go. Before we left, I Youtubed ways to feed Isla while carrying her in hands-free carriers like the Moby Wrap or K’ Tan, so that I could continue to move around and enjoy myself while ensuring she was getting enough milk.

Next, consider whether you’re comfortable getting your boob out in public. That seems a strange consideration, but it’s a big deal. I quickly realized that there’s no point in getting embarrassed at a bit of potential boob show in a public place — people don’t look directly at your boob anyway, and if they do then they’re super creepy! If you’re not comfortable, however, work out ways to conceal your feeding. A light muslin wrap works well, or even a purpose-made breastfeeding cover with a little “peephole” so you can check on how baby is doing down there.

And finally, if your baby is on formula, train them to accept room-temperature milk! While it probably helps a little, babies don’t necessarily need their milk to be the perfect temperature — neutral to the touch is perfectly fine when you’re on the go. Getting your baby to be less picky with the temperature of the formula will hugely improve your experience… trust me!