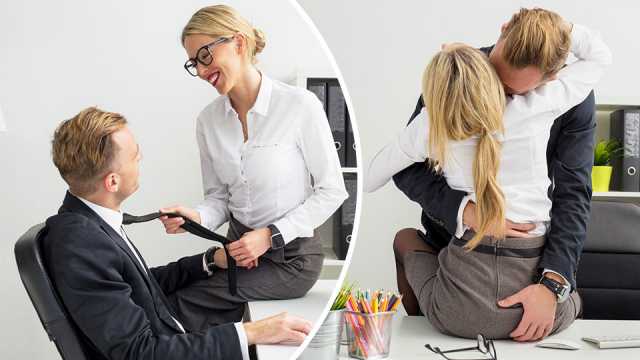 Ah, the work crush. Although not uncommon, some feel it’s highly inappropriate. But let’s face it, when so much of your day is spent at work — plus, you’re dressed your best for success — it’s understandable how someone might catch your eye, or vice versa. Okay, so now what?

Well, it all depends. Is he or she single or in a committed relationship? What about you, are you married or single? Let’s break things down and have a look at the best ways to handle a work crush.

Ask yourself some serious questions

Unreciprocated office crushes can be messy. Heck, even if he or she is into you, things can go south pretty quick. The best advice may not always be the easiest advice to swallow — like ignore those urges and focus on your work instead. Alas, the heart wants what it wants. So, perhaps it’s time you asked yourself some serious questions:

With more and more office romances blooming, fewer HR leaders see these relationships as unprofessional. However, employee dating can be frowned upon since the coupling may cause distraction and real or imagined complaints of favoritism. And if things get ugly, your company may fear that claims of sexual harassment and retaliation will ensue.

And they wouldn’t be far off. During the past 10 years, retaliation claims grew 70 percent and now represent the single most common type of complaint with the Equal Employment Opportunity Commission. So, it’s understandable how your employee may not appreciate you crushing on a co-worker. In the end, you may need to decide if losing your job is worth a crush?

What if either or both of you are married?

It’s normal to develop a crush on someone other than your spouse — you’re human after all. And it’s likely that at some point you’ll meet someone at work who feels the same. But those feelings, although dopamine-inducing and exhilarating, can lead you down a slippery slope. Therefore, how you handle things will make all the difference. To ensure your harmless crush stays harmless, consider the following: It’s not a crime to crush on someone. But just because you have a crush, it doesn’t mean you must act upon your feelings.

Dr. Mira Kirshenbaum, clinical director of the Chestnut Hill Institute in Boston and the author of “When Good People Have Affairs,” views crushes as golden opportunities — provided you don’t act on them. “They’re life’s way of telling you that you’re missing something you need to feel fully satisfied,” she tells Women’s Health. According to Dr. Kirshenbaum, when crushing on someone, the first question to ask yourself is, “Why now?”

Crushes tend to crop up when we’re bracing ourselves for change. “They’re a sign that you need to assess what’s going on — real or imagined — in your life, and start sorting things out,” says Kirshenbaum.

Ask yourself: why him or her?

When you develop a crush on someone it’s often less about the person you’re infatuated with and more about the person you want to be. A previous co-worker of mine, I’ll call her Laura, had a hot and heavy crush on her coworker. Laura was shy and reserved, while her crush was an adventure-seeking extrovert. They were opposites in every sense of the word. I believe what really attracted her to this man was that he appeared to be everything she wasn’t, and subconsciously Laura longed to be more like her crush.

In her interview with Women’s Health, Kirshenbaum says when you find yourself going weak in the knees over someone, try to pinpoint the attributes in him or her that you’re attracted to like compassion, attentiveness or a sense of humor, and nurture them in yourself. So, if your crush is the rugged outdoorsy type, then grab your camping gear and have an adventure. If he or she is a great listener, then stop talking and learn to be a better listener.

If all signs point to go

Okay, so your work doesn’t have a policy that prohibits dating fellow employees. Furthermore, he’s single and so are you. Not to mention that your chemistry is through the roof! Now what? Should you act on your feelings? You could let him or her know that you really find them attractive. Too many people waste precious years silently crushing on a co-worker. They hide their crush, desperately hoping no one finds out. Coming clean may just provide your crush an opportunity to tell you they feel the same.

How to handle fear of rejection

Now, if the thought of professing your adoration to your crush sounds horrifying, the reason is likely fear of rejection. When contemplating telling someone we like them, we become vulnerable and often imagine the worst-case scenario like being laughed at, rejected or, worse, feeling as if we’ve repulsed our crush. But the truth is, if approached in the right way, with respect and sincerity, most people would be flattered to find out they are found attractive. And if they don’t feel the same way, that’s okay. Simply smile and tell them “it was worth as shot.” Then move on. You don’t have to stop being friendly, but better to know now how they feel about you, rather than pining over them for years.

How to handle unwanted attention

Some people who are unhappily married don’t respect the boundaries of others who are unavailable. This type of coworker might develop a crush on you even if you’re not single. Best to ignore the flirtatious behavior, which will shout loud and clear you’re not interested. If they still don’t get the message, then it’s time to privately let them know that although the attention is flattering, it’s not appropriate for work and that you’d like to keep things on a  professional level.

Whether you have a crush on someone, or someone has a crush on you, it’s all good — provided everyone acts appropriately. However, if someone whom you suspect has a crush on you does or says inappropriate things, then maybe they’re more of a letch than someone with a crush. So, call them out on it or speak with HR.