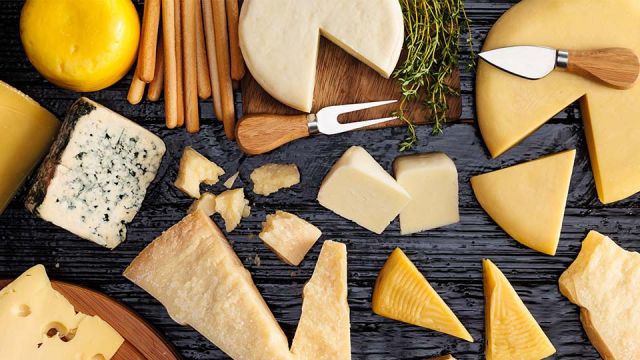 I have a confession to make: I am addicted to cheese. Shredded, melted, cubed. Swiss, cheddar, goat, you name it — I am a cheesy equal opportunist. I have yet to find a cheese I do not like (or really, love). Thankfully, there are some incredible health benefits to chowing down on cheese, from the high levels of fat-soluble vitamins A, D, E and K2, to the anti-cancer properties found in the raw, grass-fed varietals. So, overall, cheese can be a wonderful addition to a well-balanced diet and nutrition program, especially when choosing high-quality, organic ones.

However, like most things that are delicious, there can be some adverse health effects, most notably its high-fat and high-calorie content. It is estimated that a one-ounce serving of cheese has an average of 100 calories and six to nine grams of fat, mostly saturated. Of course, those statistics can be significantly higher or lower depending on the type and quality — but overall, cheese should be consumed in moderation, if not less than.

Unfortunately for me, I was doing the exact opposite, like many Americans do without realizing it. A little cheese in my morning omelet, perhaps a slice or two on a sandwich at lunch and a sprinkling over a salad or pasta at dinner. In essence, cheese was a constant in almost all of my meals. It wasn’t until I took a step back and realized what I was doing or rather, consuming, that I decided to challenge myself to think outside of the cheese cube and eliminate it from my diet — at least for a while.

So, I set a goal for one month sans cheese (which actually turned into almost two months) to see if I could cut cheese cold turkey. As a disclaimer, I should tell you, I did not do this for any particular health or dietary reason. I already consume a diet that is similar to the Mediterranean-style consisting of whole grains, leafy greens, lean proteins and healthy fats like avocado, nuts and olive oil. I also exercise on average five to six days every week, so losing weight or cutting calories was not my ultimate goal (although, it would be a welcome benefit).

This experiment was simply to prove to myself that I was stronger than my cheesy urges and could find ways to tantalize my palate without covering it in queso. Here’s what happened…

It expanded my culinary horizons

The first and most obvious change after cutting out cheese was that I was forced to find other satisfying, savory foods that I would enjoy just as much. I began researching vegetarian cuisines, as most feature a lack of dairy, and was introduced to the world of rich curries, spicy stews and hearty chilis.

Cooking with coconut milk became a staple of mine thanks to its creamy texture and mild flavor. Coconut milk, which is related to coconut water and coconut oil, is actually a liquid that is found inside mature coconut “meat” that is then blended into a thick consistency. It is rich in lauric acid, a medium-chain fatty acid that the body stores as energy. Coconut milk has been linked to helping lower cholesterol and blood pressure levels, as well as boosting your metabolism by helping keep you feeling fuller, longer.

When I was enjoying my usual favorites such as eggs, sandwiches and the like, I experimented with new ways to get rich flavor without cheese. Enter worthy substitutes such as avocado, tangy mustard and tahini hummus, which I slathered onto toasted bread or dipped into veggies with a glass of wine in place of my favored charcuterie platter. I discovered that there was an entire world out there sans cheese that still left me feeling satiated minus the addition of calories. I won’t say it was easy — especially in the beginning — but as time wore on, I found that I did not even miss it.

It benefited my waistline

As I said previously, I did not cut out cheese for any dietary restrictions, but I did notice after about a week that my stomach seemed flatter and I did not feel as bloated as I usually did first thing in the morning. While I was never a lactose-intolerant person, I do attribute gas and bloating to some digestive issues as a result of consuming processed cheese, thanks in part to its lactose. Lactose is a sugar found in dairy that can be difficult for the body to digest.

Another reason for my leaning out was because I was forced to make smarter food choices. When I was at a restaurant I could no longer order the flatbread pizza or cheesy burrito. And while I could have just asked for no cheese, I ended up ordering lighter dairy-free options on the menu instead. Sandwiches became salads, burrito bowls became fajita platters. Not only was I cutting out dairy from my diet, I was also eliminating a good amount of the processed flour and carbs and replacing them with an abundance of fresh veggies and greens.

Cheese also contains high levels of sodium, which can cause the body to bloat and retain water. This was another reason squeezing into my skinny jeans didn’t seem to be as much of a struggle when I was abstaining from cheese.

It taught me to be more mindful

While I certainly don’t want to downplay the plight of others’ suffering by saying I had an addiction to cheese, the truth is, I really, really enjoyed it and was worried about struggling without it. However, it proved to me the concept of “mind over matter” and that I was stronger than I thought. I could have stopped with the experiment whenever I wanted to, or cheated when I was home alone, but I didn’t want to — and that became even more addicting.

I was so proud of myself for accomplishing a small milestone that when the four weeks was up, I actually continued for another two weeks and then some. When I finally decided I wanted to introduce cheese back into my diet, I didn’t run out to the store and buy the first bag of shredded cheddar I could find — I wanted to make it worth it. So, I went to my neighborhood organic food market and purchased a small block of high-quality cheese made from the milk of grass-fed cows.

During my hiatus from dairy, I researched so much about the importance of understanding where your food comes from and that, while many people do make serious efforts to eat organic, one area we tend to fall short is with processed cheese. It’s true: the same people who will purchase organic eggs and milk will think nothing of throwing a block of sodium-laden cheddar into their shopping cart.

However, when you take the time to invest in cheese that is made from antibiotic-free, grass-fed animals, you are not only consuming fewer calories and fat, you’re also consuming more essential vitamins and amino acids. As an added benefit, you usually don’t need as much of them to feel satisfied. Cheese varieties such as goat, feta, parmesan and Swiss are all wonderful additions to meals, without needing to be center stage.

In short, since I’ve reinstated my relationship with cheese, I am happy to say that I am keeping it at arm’s length. I am much more conscious about how much I add to my diet and no longer feel the need to add it to everything I eat just because I can. I am able to enjoy all of the health benefits it provides such as bone-building calcium and heart-healthy protein, but have come to see it as a treat rather than a daily snack. Most importantly, I proved to myself that I could set a goal and stick to it.

I’ll always have a special place in my heart (and stomach) for melty, gooey queso, but now I can happily say, we’re seeing each other a whole lot less.