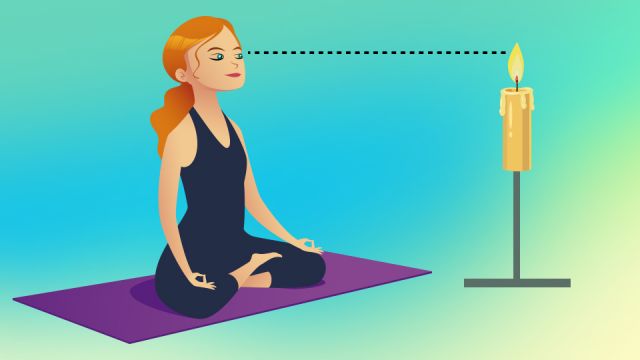 Do you ever have trouble focusing? We all do from time to time, but if it’s a regular or chronic thing, it may be significantly affecting your quality of life. It’s one thing to forget where you put your keys from time to time, or to daydream while bored at work or during a class… but when you have a hard time applying your mind when you need it, problems can obviously occur.

The best recipe for optimal focus — and optimal cognition in general — is a healthy lifestyle. This includes eating a healthy diet, getting plenty of exercise, making sure you get enough sleep, all those oh-so-important basics. On top of that, meditation and yoga can certainly improve focus further. There is even a type of yoga that centers around directing focus on a single object to train this “muscle” in your brain: trataka.

Trataka is also sometimes simply called “yogic gazing” or gazing meditation. It involves sitting in meditation while staring intently at an object (usually a candle flame) for an extended period of time. Once you have stared at the object for some time, the goal is to see the object clearly in your mind’s eye once you close your eyes. This kind of yogic meditative practice is, as you may imagine, connected to the third eye chakra — your center of intuition and “seeing the unseen.”

Along with providing practitioners with the regular benefits of meditation, trataka is has been traditionally employed to aid with numerous issues. These include weak eyesight and a scattered, unfocused mind. Trataka is also said to help deeply relax its practitioners; instilling a powerful sense of calm. It is also used to help the mind let go of the hustle and bustle of the outside world.

Here are a few researched benefits of trataka:

Trataka may help increase your overall sense of calm

A 2014 study published in the journal Heart India underscores the relaxing properties of trataka. On this practice, the study authors wrote, “The practice of trataka leads to increased vagal tone and reduced sympathetic arousal. Though trataka is known as cleansing technique, it could induce a calm state of mind which is similar to a mental state reached by the practice of meditation.”

Another study, published in 2014 in the International Journal of Yoga, tested the effects of trataka yoga on the cognitive abilities of elderly individuals. Results of this study showed that a month after beginning trataka, participants exhibited “significantly better performance” on a cognitive function test than study participants who did not practice trataka. Upon analyzing their results, the researchers concluded, “The results of this study establish that trataka can be used as a technique to enhance cognition in the elderly.”

…But approach it with caution

Although trataka has indeed been linked to cognitive benefits in elderly people, later research has found that some elderly people with eyesight issues may experience harm from trataka. The authors of a 2015 study published in the International Journal of Yoga wrote:

“… the important consideration on using trataka is the feasibility of practicing among the elderly. Staring at objects might be inappropriate in the cases with eyesight problem. Too much gazing might deteriorate the eyesight. This should be kept in mind for applying this technique in the elderly.”

So, if you are a senior citizen and have been considering trataka, it may be highly beneficial. However, depending on your eye health and the specific condition of your eyes, it may be a risk. Talk to your doctor about how trataka may affect your individual health before you begin practicing.

How to do trataka

First, it is wise for anyone (not just elderly individuals) to talk to a health professional they trust before beginning trataka practice. Yogic gazing has many benefits, but it’s not a type of meditation suitable for everyone. For example, people with certain eye issues, as well as individuals with certain psychiatric conditions, are advised not to practice trataka. Talk to your doctor just to be safe. If trataka is not for you, there are many other types of meditation and yoga available to choose from.

If you’re in the clear medically and want to try trataka at home, here are the basics:

1. Start by sitting comfortably in a meditative position. You can sit in a chair or on a cushion.

2. Set a table or stand in front of you at eye level. Place your object of focus on the table in front of you so that you can gaze at it comfortably. A burning candle is traditional, but other objects can be used, as well.

3. If you wear glasses, remove them, and position yourself at a distance that allows you to see the object clearly, if possible.

4. If you’re using a candle flame, focus your gaze near the top of the wick. Relax your eyes, and keep your gaze steady. Try not to blink too often.

5. After some time (try five minutes at first and go from there), close your eyes. Try to keep the image in your mind. Visualize it in the center of your forehead, over your third eye chakra. Do you see it clearly? If so, keep your eyes closed and focus on it until the image starts to fade. Then, open your eyes and repeat, if desired.

If you don’t see the image when you close your eyes, practice makes perfect. Just make sure you don’t strain your eyes — always listen to what your body is telling you.

Have you ever tried trataka? Has it improved your focus? Let us know in the comments!