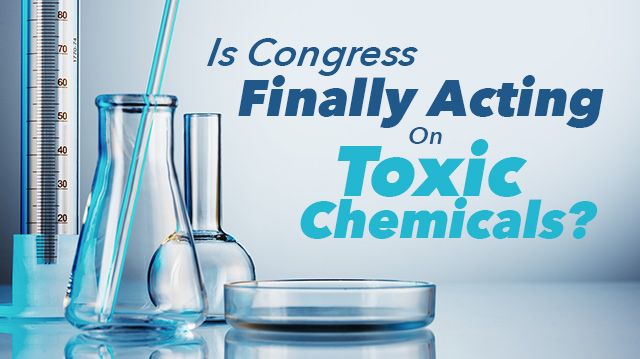 Lead-contaminated drinking water in Flint, Michigan, has raised public awareness of the threat that toxic chemicals pose to human health. The harmful substances we are exposed to on a daily basis include pesticide residues, industrial compounds that find their way into the environment, and suspected carcinogens in everyday products.

Many people assume that most of the chemicals they are exposed to on an ongoing basis — in the form of household cleaning agents, flame-retardants sprayed onto clothes or preservatives in food — have been tested and approved by the government for safety. However, under current law, the Environmental Protection Agency (EPA) is surprisingly hamstrung when it comes to protecting the public.

On Friday, May 20th, Congressional leaders announced they had reached a bipartisan agreement that would effectively merge legislation in the Senate and the House. If the bill prevails, as expected, it would update and reform environmental regulations on the books since the 1970s. The new statute, entitled the Frank J. Lautenberg Chemical Safety Act for the 21st Century is expected to be signed into law by President Obama soon after it reaches his desk.

In fact, it’s been 40 years since Congress passed the Toxic Substances Control Act, the last major federal effort aimed at safeguarding public health from dangerous chemicals. So, legislation from Washington to bolster the EPA is long overdue. Not surprisingly, like most bipartisan bills emanating from the nation’s capitol, the new law reflects a mixture of good intentions and inevitable compromises. Consequently, it is worth asking: What is in the legislation? What will it accomplish? And where does it fall short?

To begin with, the new legislation is a considerable improvement over the law passed in 1976. For example, under the current framework, the EPA has only succeeded in banning five chemicals, even though hundreds, if not thousands, of the 85,000 compounds now widely in use may pose significant risks to the public’s health.

The new law closes an important loophole. Under the 1976 statute, for instance, manufacturers were not required to provide safety information on their products before they hit the market. In fact, the EPA had to prove that a particular substance posed a danger before it could obtain industry data. This puts the EPA in a catch-22. After all, regulators can’t do their job if they don’t have access to the scientific data on the substances they are supposed to regulate. Now, companies will have to supply relevant product information demonstrating their compounds have been tested and are reasonably safe for people to use.

In addition, the legislation moving through both houses of Congress this week would clear up language in the previous bill, essentially giving the EPA greater authority to ban or restrict chemicals that pose a risk to human health. In particular, it will direct the EPA to assess the dangers associated with widely used chemicals and prioritize enforcement to curb the most hazardous substances.

The EPA will also be instructed to pay special attention to vulnerable populations — such as children, pregnant women and the poor — when prioritizing resources and assessing risk. Substances stored or found near sources of drinking water will also receive greater scrutiny.

The EPA’s capacity to regulate hazardous chemicals has been hampered by the judicial branch. Since 1976, for example, a number of court decisions at the state and federal levels have overturned agency bans on known toxins. For instance, in 1991, a US appellate court ruled that the EPA had exceeded its statutory authority when it banned asbestos, a widely recognized carcinogen responsible for 120,000 deaths worldwide per year. One reason many industry interests supported the current bill is that uniform regulatory standards will bring more certainty to the oversight process.

Despite many encouraging improvements, the current legislation has numerous shortcomings as well. Chief among them, critics contend, is a clause preempting individual states from restricting chemicals the EPA has evaluated or is in the process of reviewing. For instance, many states — most notably California — have taken the lead when it comes to curbing toxic chemicals. As a result, many environmental groups and some state agencies are disappointed with this clause. However, in some instances, states may be eligible to apply for a waiver.

Funding for the EPA has always been an issue for the agency. Faced with regulations they didn’t like — such as limits on carbon emissions — Republican lawmakers have frequently threatened to defund the EPA. The new law would require the chemical industry to contribute $25 million per year to help support EPA’s efforts, but that’s only a small fraction of the money regulators will need to review thousands of hazardous chemicals and protect public safety.

No doubt, the ability of the EPA to live up to its mandate will depend on whether Congress continues to allocate resources to the agency. As always, public pressure on lawmakers will be key to seeing that the EPA’s mission — keeping citizens and the planet safe from toxic substances — remains a national priority.