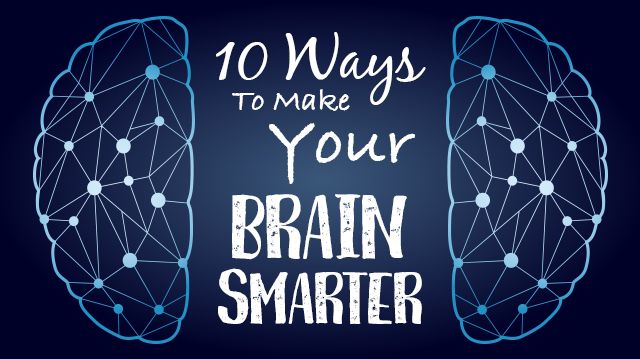 Close your eyes, move your feet and smell the roses. What does this have to do with making your brain smarter? A lot. Your brain is a work in progress. Improve it or lose it. Here are 10 stimulating challenges that will turn you into the genius you were always meant to be.

Brushing our teeth is something most of us do daily. We really don’t put that much thought into it — but maybe we should. Since brain mapping shows us that creativity situates in the right hemisphere of our brains, experts suggest that we can stimulate this right brain by changing things up and working with our non-dominant hand. And it doesn’t matter whether you’re left- or right-handed because one hemisphere is active when we use our dominant hand, but both hemisphere are activated when we use our non-dominant hand.

So the next time you brush your teeth, open the tube, apply your toothpaste and brush with the opposite hand. While the process may feel odd, the large network of connections and brain areas rarely used will be faced with an engaging task that’s interesting and challenging. Stimulating cells better helps your brain integrate its two hemispheres.

When was the last time you visited a museum? An educational study conducted in 2011 compared surveys from 10,912 students and 489 teachers at 123 different schools after each treatment group received a museum tour. On average, the surveys were conducted three weeks after the tour. Student participants and teachers received a one-hour tour of the museum, where they typically viewed and discussed five paintings.

Although some students were free to roam the museum following their formal tour, the entire experience took less than half a day. This is what happened: The students actually retained a great deal of information from the tour, recalling details at very high rates.

As well as recalling details, those students who received a tour seemed to demonstrate a stronger ability to think critically about the art they were viewing. In fact, they became more observant — noticing more and describing more details in an image.

Move to the beat of your own drum

Can playing “Chopsticks” on the piano make your smarter? Well, according to a study published in The Journal of Neuroscience, it can. Kids who received at least three years of instrumental music training outperformed children without training in fine motor skills (the coordination of small muscle movements), vocabulary and nonverbal reasoning skills.

Apparently, people who are better able to move to a beat show more consistent brain responses to speech than those with less rhythm. The study findings suggest that musical training might sharpen the brain’s response to language — making you a little smarter.

Shower with your eyes closed

Hop in the shower and shut your eyes. Even if you drop the soap — that’s okay. Using your different senses — like searching for the soap or shampooing while feeling the textures with your eyes closed — works your brain and helps make you smarter.

Using your fingers to make fine distinctions between objects or textures can rewire the brain areas involved in touch suggests Larry Katz, a professor of neurobiology at Duke University Medical Center and author. This has been true for brain-imaging experiments with blind Braille readers and monkeys trained to use their fingers to get food.

Dancing not only activates the cerebellum (part of the brain that helps with judgment), but it also produces a protein that helps neurons communicate more effectively. A 2003 study in The New England Journal of Medicine by researchers at the Albert Einstein College of Medicine discovered that dance can improve brain health. It seems that the mental effort and social interaction of busting a move helps reduce the risk of dementia.

Sex and the brain… Sounds like a bad sitcom. Yet researchers at the University of Maryland credit frequent sexual activity with increased brainpower. In fact, sexual experience enhanced the number of newly generated neurons in the brain.

So it seems that learning how to juggle may actually make areas of your brain grow. Participating non-jugglers practiced juggling for three months, after which they showed an increase in portions of the brain responsible for visual and motor activity.

Instead of waking up to the usual scent of coffee brewing in the kitchen, wake up to another scent, suggests Katz. Try vanilla, citrus, peppermint or rose. Keep a scented oil in an airtight container next to your bedside for a week or so, and sniff it when you first wake up and then again when you bathe and dress.

Consistently linking a new scent with your morning routine will activate new neural pathways and potentially make you smarter.

Your brain needs exercise — just like the rest of your body. The term “neurobics,” coined by Katz and a fellow co-author, is really about changing the patterns of activity in the parts of your brain. The easiest way to rev up your thinking skills, suggests Harvard Health, is by changing things up a bit.

These minor challenges make the brain work better because it’s encountering something it hasn’t experienced before. In the end, you’ll be smarter for just having tried.