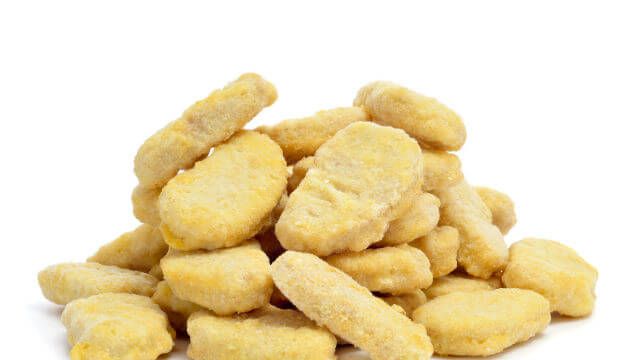 Ever since the disgusting exposure of pink slime in our foods a couple of years ago, processed meat products have thankfully been under greater scrutiny by consumers. One of the products associated with using pink slime, which is basically meat remnants ground into a slurry and treated with ammonia gas, is Mcdonald’s Chicken McNuggets.

In an effort to regain lost business, McDonald’s has launched a transparency campaign to let consumers know what is in their food. When it comes to McNuggets, McDonald’s is adamantly insisting that their manufacturing process in no way resembles pink slime, and is actually white meat chicken.

“We start with white-meat chicken cut from the tenderloin, breast and rib, and grind it with a small amount of chicken skin for flavor and juiciness to help them keep their fun shape. Next, a marinade is added. Once everything is mixed, we create the four famous Chicken McNugget shapes – bell, boot, ball and bone. They’re coated in a light tempura batter, partially fried and flash frozen to preserve flavor.”

To drive their point home, McDonald’s recently released a video, in which host Grant Imahara travels to a Tennessee Tyson Foods factory to see how the McNuggets are made. The video shows that the ground chicken plus marinade used for the nuggets is ground from white meat, and is a coarser texture than pink slime.

However, even if this is the standard practice at all McNugget factories, the rest of the video shows that they are not much healthier.

The video shows the ground chicken in a large vat, being stirred into the “Marinade.” Just a few of the ingredients contained in the Marinade, as explained by the video, are wheat starch (which is high in gluten), dextrose (a fancy word for sugar), autolyzed yeast extract (another term for monosodium glutamate, aka MSG), and natural flavorings, which could be virtually anything that was once natural.

The McDonald’s website also admits that an anti-foaming agent known as dimethylpolysiloxane is used in the McNugget cooking oil. This chemical compound is also found in silicone-based lubricants, adhesives, caulks and sealants. According to Vani Hari, aka the “Food Babe,” dimethylpolysiloxane may be preserved by several undisclosed chemicals, including formaldehyde.

If that wasn’t enough, the chicken used in the McNuggets comes from conventionally-raised chickens, which are likely kept cooped up in abhorrent conditions, treated with antibiotics, and fed GMO grain-based diets. Not very natural.

So, while McDonald’s Chicken McNuggets may indeed contain real, white meat chicken, the industrial processing that they undergo, and the chemical additives and sugars that they contain, make them far from healthy. Deciding that they qualify as pink slime may be off the table, however, it really doesn’t make much of a difference: they’re still junk.