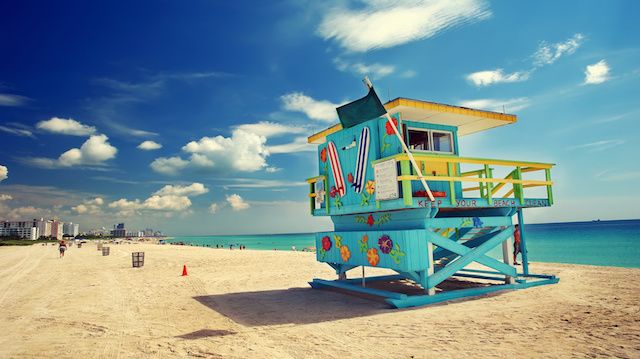 The most conservative estimate of sea-level rise on the Florida coast is two feet by 2060. Some predict six-and-a-half feet by 2100. By contrast, the last century has seen just nine inches of coastal encroachment by rising seas. Nevertheless, nine inches of water already is wreaking havoc on low-lying Miami Beach.

The seven-square-mile island has bigger problems than your average metropolis. The resort city is being slowly overtaken by seawater not only from its sides but also from below. Resting upon a porous limestone foundation means seawater is rising up, making the island susceptible to heavy flooding. Rainwater literally has nowhere to go.

Miami Beach Mayor Philip Levine jokes that he floated into office. He is referring to his campaign promise to address the area’s flooding problem. This, more than anything else, won him the election in 2013. He hasn’t let the voters down.

The first installment of Levine’s Miami Beach plan was implemented last year: $100 million to elevate eight major roads, raise six massive sea walls and install 10 pumps that serve to push floodwaters back into Biscayne Bay. The full plan is estimated to cost between $400 million and $500 million and will take the next five to six years to complete. It includes another two miles of elevated roads and 70 additional pumps.

The port cities Rotterdam, Netherlands and Hamburg, Germany have been protecting their shores from flooding for some time. Long-time experts at constructing traditional barriers to water — dikes and sluice gates — these two powers are starting to think outside the box.

One innovative but costly strategy has been implemented in the forward-thinking HafenCity in Hamburg. The district was raised and rebuilt using anti-flooding specifications. The roads are raised. Buildings can be built below this level, but each must have an entrance onto a raised road. The buildings themselves are built to withstand flooding and water damage. They are fully waterproof below the level of the elevated roads.

Techniques designed to build with, instead of against, nature are also being implemented. Some scholars advocate enlarging rivers and creating more room for flood plains. Instead of containing the floods, these advocates argue, urban planning should work with them.

Complementary to plans working alongside nature on land are plans to work alongside nature underwater. Coastal engineer Jan Mulder proposes sand dunes, restoring tidal marshes, and using naturally occurring winds and currents to keep biomaterials in protective places. New York is taking a page from Mulder’s playbook with its Living Shorelines Project. In 2012, the city began transporting eelgrass and oyster half shells in an attempt to bolster the city’s shoreline. Two million oysters have since moved in.

Some ideas are even more radical. Floatyard is a man-made construction that would bob in Boston Harbor. The structure would provide three stories of community homes built around a floating courtyard. It’s a crazy idea, but not so crazy as to prevent it from earning a prestigious award from Architect magazine.

As sea levels rise and more cities find themselves combating the ocean at their coasts, we can expect further innovation. Miami-Dade County Commissioner Daniella Levine Cava isn’t worried about the will to innovate or people’s commitment to fixing the problem. She is, however, concerned that few recognize the urgency of the situation. In addition, she says, everyone is worried about cost, especially as less-developed countries will be facing the same problems as their wealthy counterparts.

Hopefully, cost-effective, innovative solutions will arrive in time to save coastal cities worldwide.