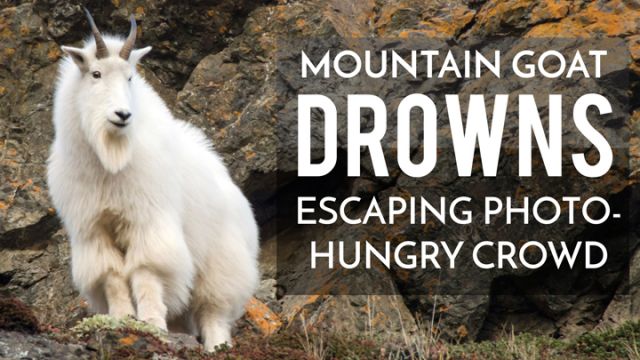 Here’s another lesson that serves to remind us the importance of allowing wildlife their space. But this reminder comes too late after an innocent goat drowned trying to flee a crowd of people who were desperate to snap photos, no matter what the cost.

This is not just about a goat drowning thanks to the carelessness of photo-hungry opportunists who probably wanted nothing more than vacation pics to post on social media. No, this is a story about humans once again encroaching on the lives of animals in the wild, which threatens their habitats and existence.

In Alaska, troopers received calls about a group of people harassing a mountain goat and following it onto the breakwater rocks. The goat apparently jumped into the ocean to get away from the crowd snapping its picture.

Sadly, the animal drowned when it couldn’t get back to land because of the number of people on shore, the investigation revealed. Alaskan troopers in downtown Seward said in an online post:

“It is imperative that wildlife is given adequate space to be able to leave a congested area like downtown Seward. People not giving the animal space and getting close to take photos resulted in a wild animal dying for no cause.”

Over and over again we hear these sorts of stories, yet somehow they don’t sink in. Just earlier this year, many of us were shocked to see photos and footage of people crowding and manhandling a helpless baby dolphin at a beach in Argentina for the purpose of touching it and taking selfies.

Needless to say, the last images photographed were that of the baby dolphin, dead and abandoned on the beach. The incident prompted the Argentinian Wildlife Foundation to issue a public reminder about the vulnerable La Plata dolphins, which are only found off the coasts of Argentina, Uruguay and Brazil. Just like the innocent mountain goat, the life of a dolphin was cut short thanks to humans who couldn’t see past their own sense of amusement.

Similarly, on a trip to the Big Island in Hawaii, I witnessed firsthand a woman ignore a large sign that asked tourists to not walk beyond a rope, which cordoned off a small area on the beach designated for tiny baby green sea turtles. Hell bent on getting close-up shots, she stepped over the rope narrowly missing the babies beneath her feet.

It’s not a crime to want to take beautiful photographs of animals in their natural habitat. But now more than ever — with camera phones only a fingertip away and instant downloads to social media— “photo buffs” harming wildlife or habitats in pursuit of the “perfect shot” have become alarmingly common.

All nature photographers, whether professional or hobbyist, should willingly and happily follow a simple credo. “I will not harm my subject.” Anyone unwilling to abide by such a credo has no business photographing animals in the wild.