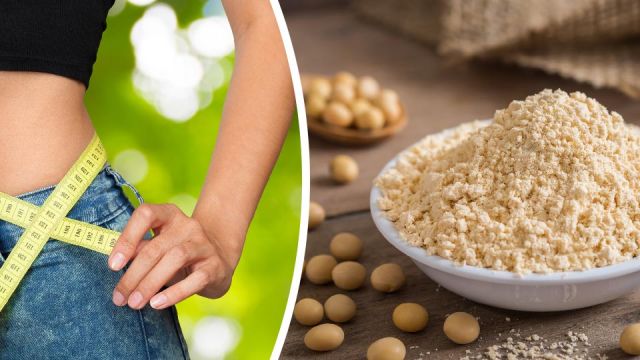 Soy has been all the craze for years, and although it does offer some unique benefits, especially when fermented, soy is often anything but a “health” food.

It’s a confusing topic, one that tends to become more confusing by the day.

As you skim through the headlines, the latest research may draw some surprising conclusions. However, things aren’t always exactly how they seem. Results can be skewed based on a study’s design — especially when there are motives outside of black and white science.

The latest research states that soy-based protein supports “significant” weight loss. Let’s dig deeper into these findings, as well as who funded the research itself.

Study finds a link between weight loss and soy-based protein

Researchers at the University of Colorado Anschultz Medical Campus recently concluded that soy-based protein is equally effective as other protein sources in regards to weight loss. Supported by DuPont Health and Nutrition, this company strives to provide “innovative solutions” in the food industry.

You may recognize that name, as it is also the world’s eighth-largest producer of chemicals. Currently, the Du Pont family is worth more than $14 billion and in over their 200 years of business, they have developed everything from gunpowder to plastics, nylon to Teflon — and now, they’re in the soy protein business.

These recent findings were published in Obesity Science & Practice. After studying 71 overweight or obese adults (58 of whom were female), it was concluded that soy-based protein foods can be incorporated into a high-protein diet for improving body composition, body weight and cardiometabolic health.

While looking at the actual results of the study, this bold conclusion may be slightly misleading. When comparing those who consumed three servings of soy versus non-soy protein foods per day for 12 months, both groups lost weight. Overall, body weight reductions and differences in body fat mass were not different across these two groups.

In this case, stating that soy protein supports weight loss is a fairly accurate statement. However, when the foods in question are a dry-blended soy beverage, a meat-free sausage-like soy patty and a soy nutrition bar, there are likely healthier plant-based protein options.

The truth about soy

Throughout the research, there is a lot of conflicting evidence surrounding soy. This is mainly due to the way in which it’s studied, as well as its estrogenic and anti-estrogenic effects on the body. Also, the type of soy has an impact on results.

For example, whole soy foods like soybeans may produce different results in comparison to a soy protein powder. There are also variations in health effects when soy is fermented, versus unfermented.

I am all for meat-alternative proteins and based on the increasing demand, it’s clear our relationship with meat is far from sustainable. However, are mass-produced isolated soy protein products the answer?

For decades, the debate over soy has continued to spark controversy. While some studies have seen evidence that soy supports weight loss and supports cancer prevention, other studies have found that soy actually promotes the growth of breast cancer cells. Soy has also been deemed a common food allergy.

Soy is a billion-dollar industry

It’s challenging to chat about the health benefits of such a controversial food, especially when it is such a profitable one. Although mass-produced to “meet the protein requirements of humans,” it was first used mainly as animal feed, back in the 1950s.

Starting in the 1980s, animal studies (including one conducted on monkeys) found an association between soy diets and the growth of pancreatic cancer. Once again, this evidence was conflicting and in the years to come, many cancer researchers stated that soy foods offer cancer prevention benefits.

By the 1990s, concerns were surfacing regarding the possible connection between soy consumption and breast cancer. From coronary heart disease to thyroid function, soy continued to pop-up in the headlines — and the results continued to be mixed.

Unlike in Asian countries, where they mainly consume traditionally fermented soy, many Americans are stocking their fridges, freezers and even their pantries with processed soy products — which are void of any beneficial microbes.

At the end of the day, approximately 90 percent of soybean crops in the United States are genetically engineered. These crops are also closely related to an increased use of Monsanto’s Roundup — which has been linked to many health consequences, including antibiotic resistance.

Bottom line: Whole soy foods do offer potential health benefits. However, many experts agree that soy products have been over-promoted — especially based on how soy is currently produced and sold. Technology has allowed companies to isolate soy proteins and then add them to a wide range of processed foods, fueling the soy craze.

The soy debate will likely continue and, in the meantime, be mindful of what you read. Feed your body real food and remain aware of the latest research (as well as who’s funding it).