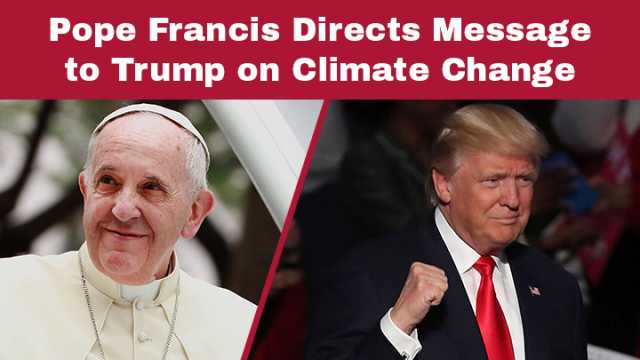 Pope Francis issued an urgent warning to the world’s political leaders to take the science behind climate change seriously and not to abandon international agreements to address the perils of global warming.

The Pontiff’s message seemed directed at president-elect Donald Trump, who has signaled that the United States will no longer play a leadership role when it comes to efforts limiting carbon emissions aimed at protecting the environment.

In a statement made at a Vatican-organized gathering of scientists, the pope noted that “there has never been such a clear need for science” to inform the political decisions that can safeguard our planet.

Since becoming pope, Francis has demonstrated a deep concern for the environment and a remarkable respect for science. In a papal encyclical issued last year, he wrote of the ““urgent challenge to protect our common home.” He also added that “the earth herself, burdened and laid waste, is among the most abandoned and maltreated of our poor.”

Pope Francis — a man of faith and science

A reconciliation of faith and science appears to be a persistent theme during Pope Francis’s tenure, as is a concern for the poor and dispossessed. What is truly remarkable, however, is the way the pontiff’s preachings on these matters form a cohesive and compelling whole. In many ways, Francis seems like the true intellectual descendant of Christianity’s greatest philosopher, St. Thomas Aquinas, who argued that the truths of faith and reason were entirely compatible.

Indeed, the pope seems deeply troubled by “the ease with which well-founded scientific opinion about the state of our planet is disregarded.” He also indicated his profound frustration with how politics has become a hostage “to a technology and an economy which seek profit above all else.”

Pope Francis has clearly articulated why respecting science is so important to the cause of both social justice and our planet’s health. In short, the pope is deeply concerned about the way in which economic and political decisions, which should be made on the basis of the common good, become corroded by narrow interests.

As Pope Francis put it, “I would say that it falls to scientists, who work free of political, economic or ideological interests, to develop a cultural model which can face the crisis of climatic change and its social consequences, so that the vast potential of productivity will not be reserved for only a few.”

The pope’s comments come at a time when the Trump administration appears poised to roll-back international efforts to address climate change and shift U.S. policy away from alternative energy and towards fossil fuels. For example, the president-elect has already indicated that he wants to eliminate biofuel programs while ending restrictions on so-called “clean coal.”

In fact, Trump is one of the only world leaders who has voiced such deep skepticism regarding climate change. Although he has since backed away from some of his more extreme statements —such as his contention that global warming is a hoax perpetrated by the Chinese — his selection of coal industry insiders to head the EPA and fill key cabinet positions leave little question that the Trump administration may pursue policies that ignore scientific evidence and warnings about the potentially catastrophic impact of climate change.

As the Trump administration plots its energy strategy, however, temperatures are soaring in the Arctic and the polar icecaps continue to melt at an alarming rate. Climate change predictions made years ago, such as the collapse of the Larsen C Ice Shelf in Antarctica are beginning to take place.

Despite record wildfires in the North Western United States, a doubling of ocean heat content in recent decades, and the fact that extreme weather events are starting to become routine there are still concerted efforts to deny and suppress not just evidence of climate change, but even language that refers to its possible existence. For example, Wisconsin’s Department of Natural Resources recently removed all reference to “climate change” from its website.

Similarly, Scott Pruitt, who Trump has nominated to head the Environmental Protection Agency, has made some highly questionable assertions about global warming and numerous environmental issues. For example, Pruitt has denied a connection between the practice of fracking and water contamination, despite all evidence to the contrary. Also, he has insisted that there is widespread disagreement as to whether climate change is manmade or not.  It’s a claim that is plainly at variance with fact as climate scientists are virtually unanimous in their belief that global warming is real and is caused by mankind’s energy habits.

Will the Trump administration heed Pope Francis’s call to take the scientific community’s warnings regarding climate change seriously? Early indications are not encouraging. Interestingly, several centuries ago it was the Catholic Church — during the Dark Ages of the Inquisition — which seemed bent on denying scientific evidence that appeared to contradict the Church’s teaching.

Now, however, a more enlightened pope insists that moral values rooted in faith — particularly those having to do with social justice and our shared responsibility to be good stewards of our environment — are not just compatible with science, but also furthered when we acknowledge the empirical evidence. It’s a position that is in stark contrast to economic and political forces that seem determined to bury their heads in the sand as polar ice caps melt, oceans rise, and the tides of a truth, unjustly and irrationally ignored, threaten humanity.